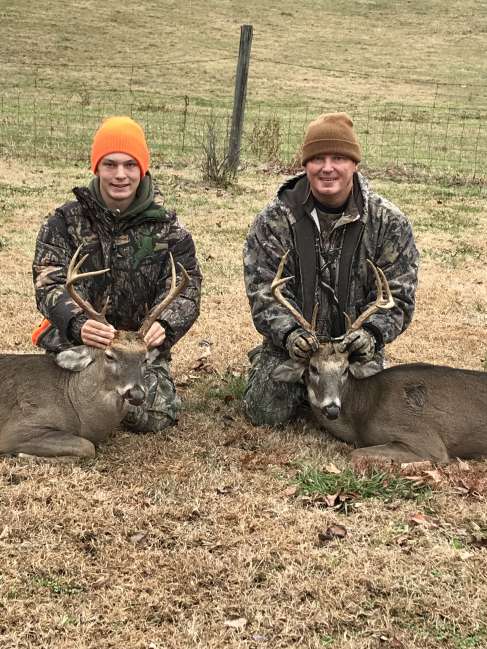 Me and my son Chase Moore were hunting on the morning of November 18th in 2 separate stands about 300 yards from each other. I was in a blind in a cow pasture and he was in the edge of a field that connects with a wooded creek bed. I heard a shot at about 6:45 and texted him to see if he had one on the ground and he said yes. I told him to sit tight for a little while to see if I might get one. About an hour later something told me to look to my left and when I did I seen nothing but horns. I knew it was a deer we had seen on camera and was going to shoot it. I made a good shot and my son called and asked if I got a buck and said yes. He came over and I was so excited and I gave him a hug and he was pretty pumped also. That was mine and his biggest deer we have killed to this day. He shot his first one 2 years ago . He is 14 years old.His was a 7 pointer and mine was a 9 pointer. We live in Alamance County in Eli Whitney and we shot the deer in Snow Camp in Alamance County.The Lord was looking out for us that day.It was a truly awesome process and experience.

Ray M has not filled this section yet.