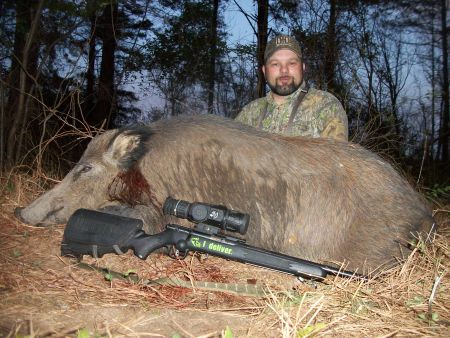 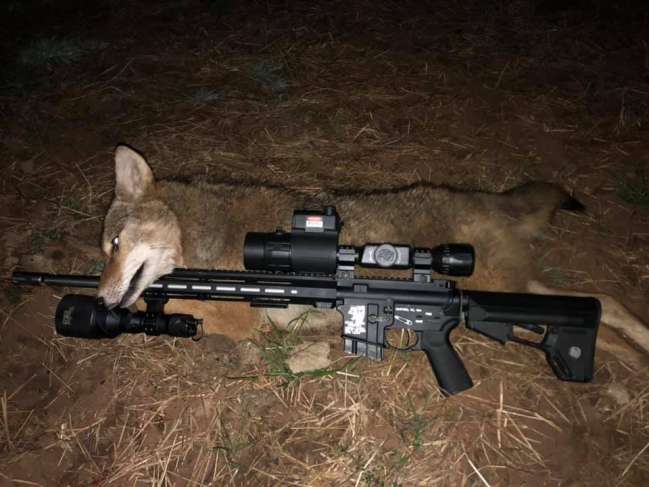 Get out there for the last bit of coyote breeding action. I caught two male coyotes chasing a female coyote as breeding season comes to an end. Eventually a shot presented itself in a safe direction. Check out some unseen coyote behavior in this video. 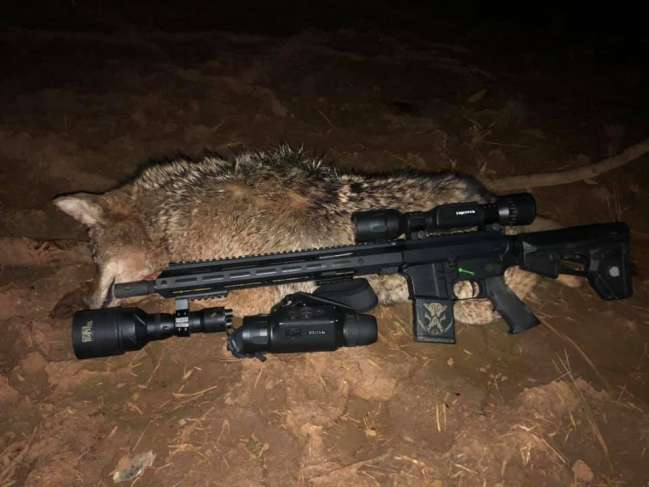 The end of breeding season is near but hunters can still get in on some coyote action using female howls. Males obviously respond to the last female howls before the females den up in secluded areas to raise their puppies. Once denning begins, female coyotes will stop broadcasting their locations to hide their den area. Female howls in March will also bring in females that want the prime areas to raise their young. These two reasons are why I use female howls heavily in Jan-Mar. Soon hunters will switch to young prey distress as small animals will soon be having their young. Gett in on those last few hunts before breeding season comes to an end. 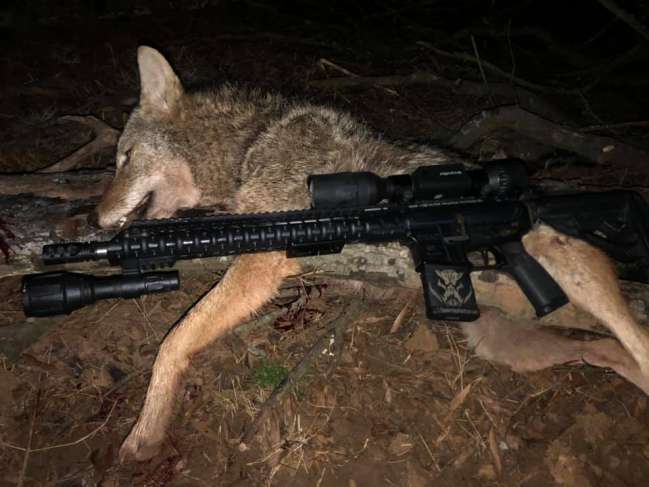 Calling coyotes is telling a story to convince a coyote to come investigate. Watch the video to hear the love story the Mailman tells to bring in this female coyote during the coyote's breeding season. Estrus, whines, challenges and actual breeding calls work wonders right now, bringing in curious coyotes. Add these calls to your arsenal for more success this winter. 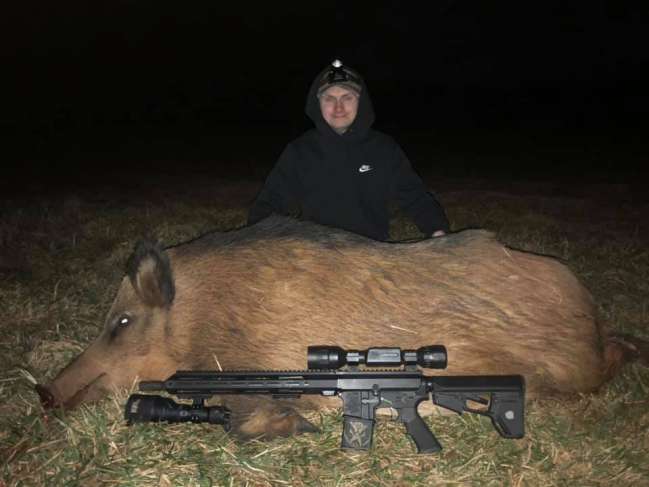 Jan-Mar is the best time for me taking big hogs around 300 pounds. The acorns are all gone and the deer hunters are no longer baiting. Big hogs need to eat so they go back to the large natural food sources. Hit those fields right now for those big monster hogs. 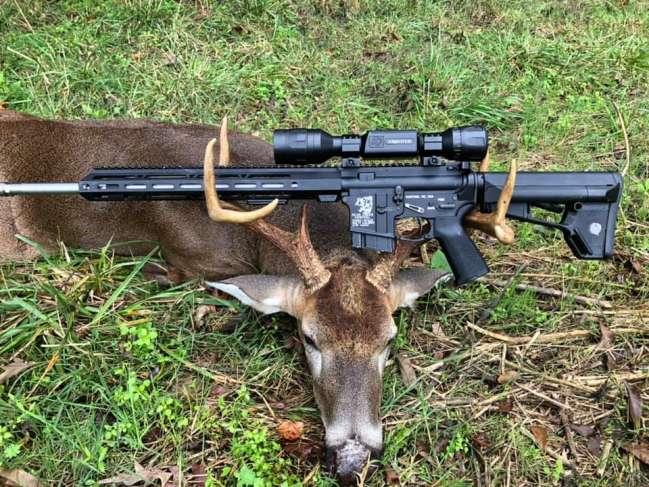 A facebook memory from 2018 reminded me of a bedding area that bucks cruised through looking for does. On the first day of my vacation I set up in the area and had this nice 8 chasing a doe around my blind. Bucks are chasing does here in the upstate and it is a great time to be in the woods. 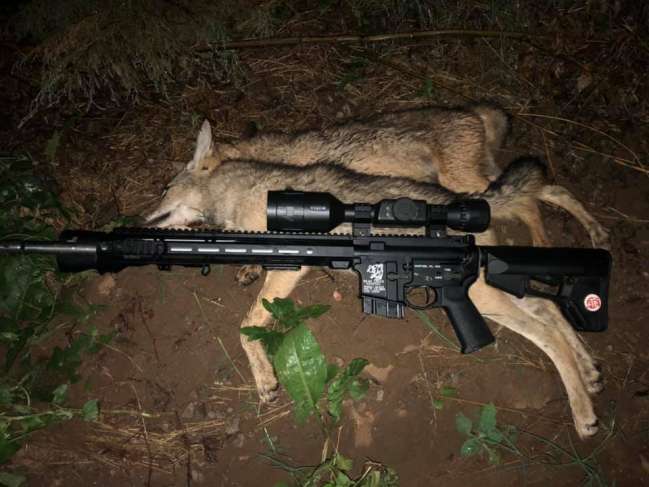 This year's coyote pups have hit the fields and coyote numbers are the highest they will be for the year. Pup sounds are producing right now so get out there and get on some coyotes.

Hogs are going through the new growth to get to the cut wheat laying on the ground. This pattern is still paying off for the Mailman. 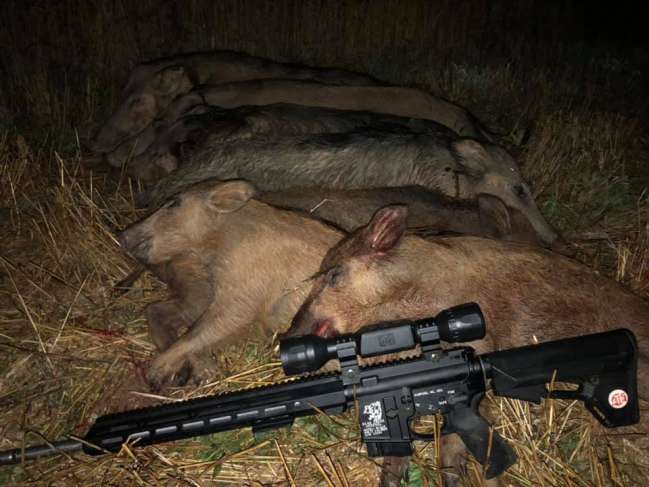 There are certain food sources that produce huge hog numbers at certain times during the year and right now is one of them. If you have property with wheat on it.....now is the time to set up on this food source and stay put. I took 8 off a small wheat field last night and I will be hunting this area weeks after they harvest the remaining wheat. the fallen wheat will bring hogs in until the last of it is gone. Huge harvest numbers are available right now on this hot food source. 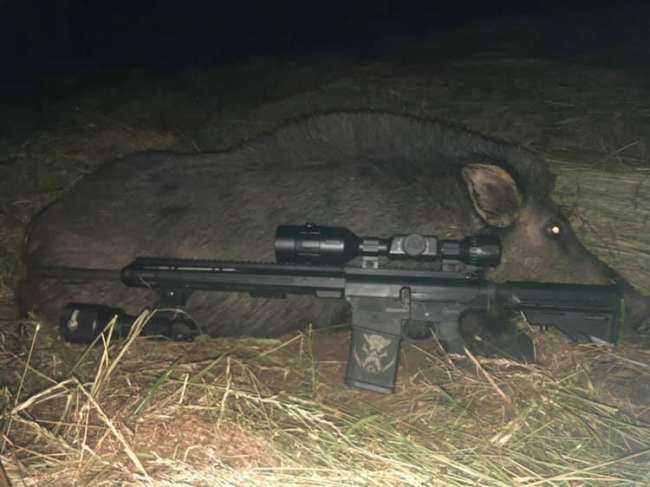 Landowners are cutting fields for the first time this year and it's a great time to get out there after some hogs. 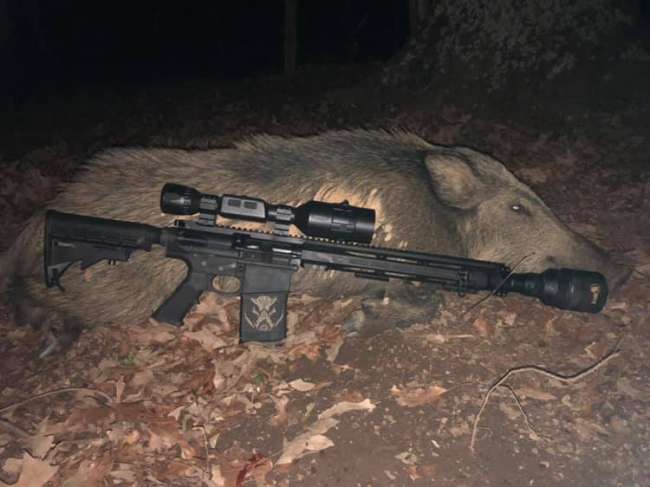 Budget ARs with an upgraded trigger drop 120 plus harvests for me per year in SC. Check out my latest AR 15s from BCA. 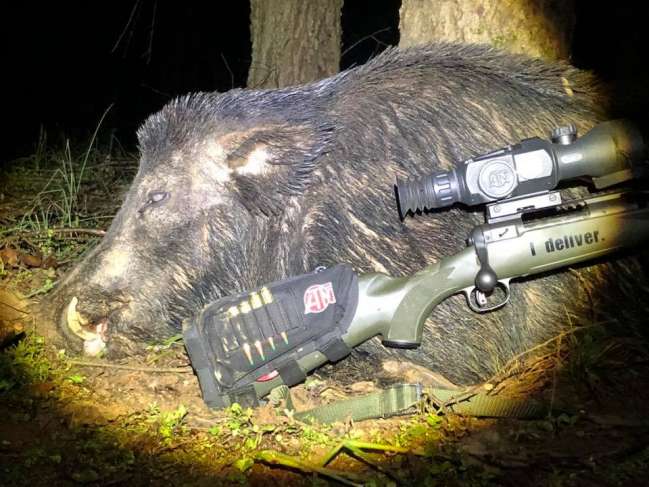 March brings in the spring as we approach turkey season. This also brings in a time of year that I consistently take large hogs in the 300 pound range. Most of times I see mating behavior as the spring comes in and I have been able to capitalize on this time of year. Trail cameras are key to finding big massive hogs.

As breeding season winds down for coyotes, coyotes go back to feeding heavily. Prey sounds become great again as vocals wind down. Females are less vocal as they seek out den areas and don't want to advertise their areas. Spring means lots of young prey so change up those tactics. 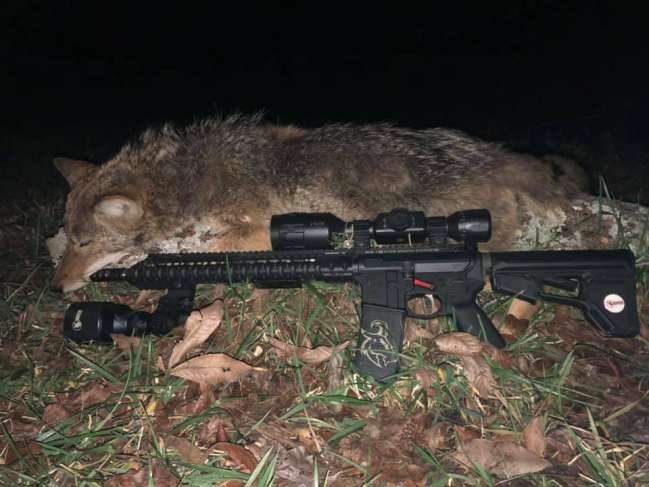 If you take one coyote out of a double, return a few days later for an easy second harvest as the remaining coyote will stay in the area looking for it's lost partner. This coyote came in within seconds just three days after the harvest of it's partner. Grab those secondary harvests to improve your numbers. 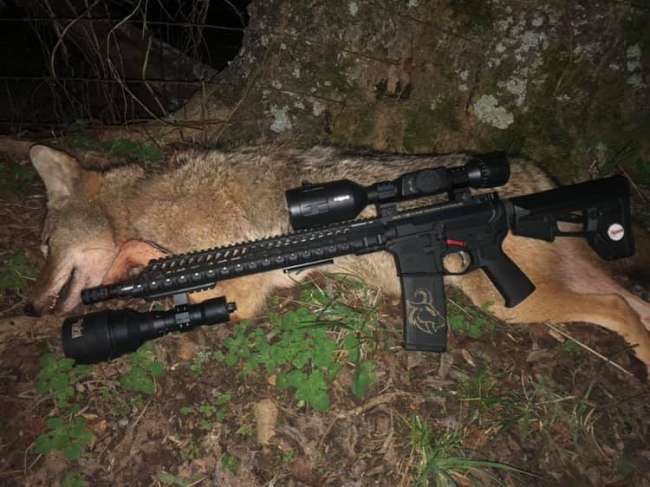 Go back after those coyotes you had encounters with and pull another harvest. 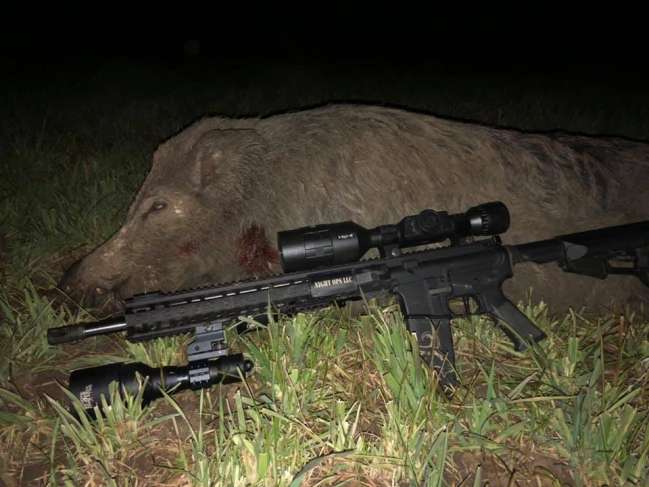 Stay on hogs all year long with this bait stacking technique. 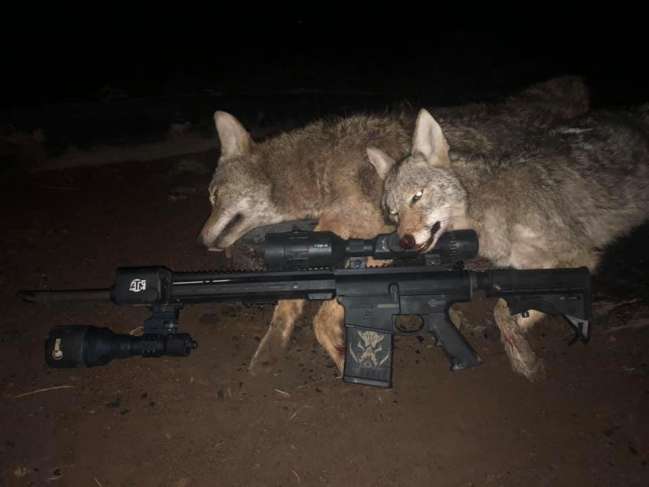 Coyotes are coming in to estrus calls,mating and territorial fighting calls. Breeding season is in full swing 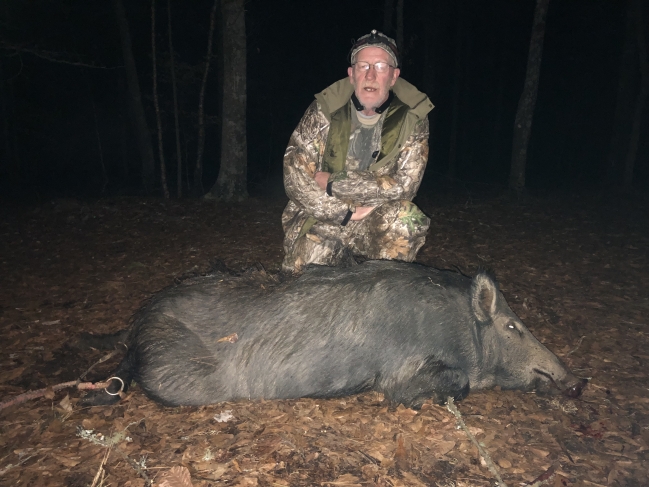 Hog hunting popularity has increased right along with the numbers of wild hogs. The demand for hog hunting opportunities has risen right along with these numbers. A large number of hunters seek out a guide to get a taste of what they have been seeing on social media. This can lead to major disappointment if you do not pick the right hunting guide. Check out this video of a quick 15 minute hunt with Bob Sleigh as he finally scores his first hog after four paid hunts. 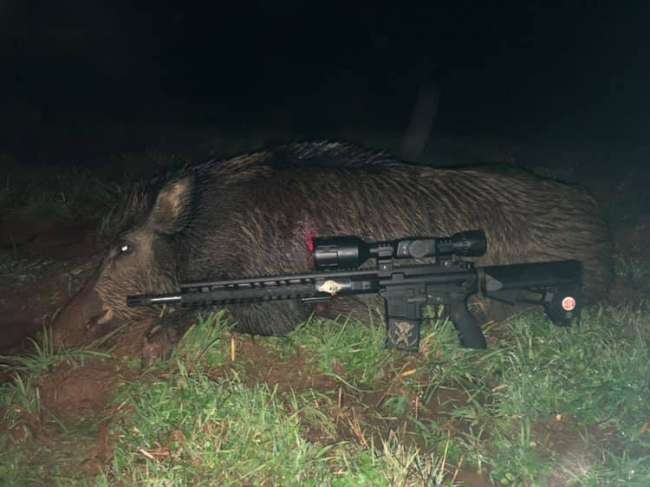 One of the best times to catch hogs in the open early in the evenings is during rainstorms. Many times I have been out in a light rain with distant heat lightning and the hogs hit the fields. Check these the n 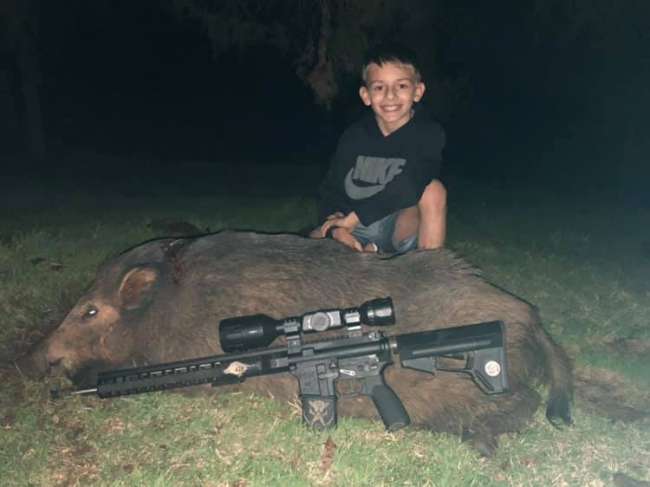 Mailman's grandson Ethan Wisnewski aka E Money, scores on his first hog hunt. The Wisnewskis stalked in on a group of hogs and took a nice sow out of the group for Ethan's first hog harvest.

Still on the wheat

Gamelands are tough because hunters cannot bait or hunt at night on these properties. Targeting neighboring properties is the key.

'The Mailman' as Gene is known is an Ambassador for ATN, Pro-staff for Predator Tactics, Mossy Oak and Night Ops. The Mailman moved to SC from PA and has enjoyed the great outdoors here in the sunny south. 100+ harvests the last three years along with videos on GOAT Productions by Mailman29680 on his Youtube channel. Gene prides himself on helping others be more successful with products from the companies he represents.