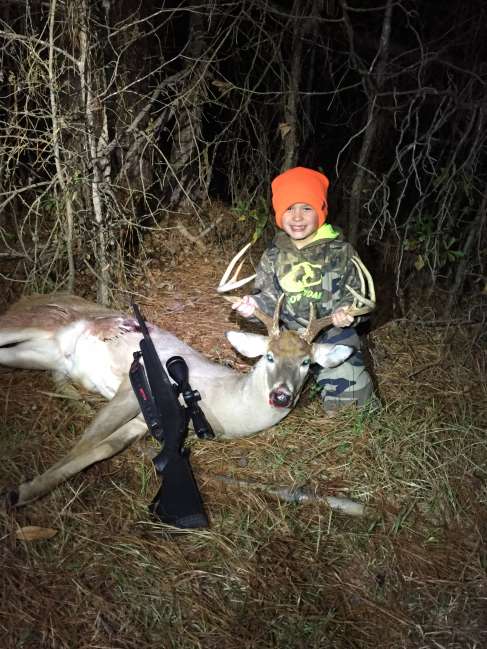 Seven year old, Austin McPherson, has had a stream of good luck for his first hunting season! He killed his first deer which was a 8-point in November. Soon after the 8-point was killed, an 11-point appeared on the deer camera. We started sitting in the ground blind every chance we got, rain or shine. About two weeks ago, we were sitting in the ground blind and he showed up with three doeâs on the corn pile. Something spooked one of the does and the 11-point took off running before little Austin could get his rifle ready. Austin looked at me like he had lost his best friend. I explained to him, that's why it's called hunting, and it's not easy to kill a big buck and you must be on top of your game! I told him to hang in there and hopefully the buck will come back around. Then the day came, December 19th. We were hunting in our ground blind and several doeâs and a few small bucks were all around us, I whispered to Austin âtoday is going to be the day son, so get ready!â About 10 minutes later, the 11-point walked right to the corn pile, broadsided to us. Austin started shaking like a leaf on a tree. I quietly said âcalm down son, focus and take a good shot.â Thatâs when he shot and the deer jumped straight in the air, ran 20 yards and fell over! Austin was grinning from ear to ear and was one happy little fella! I am so proud of Austinâs determination and the love he already has for hunting....Like Father like Son! 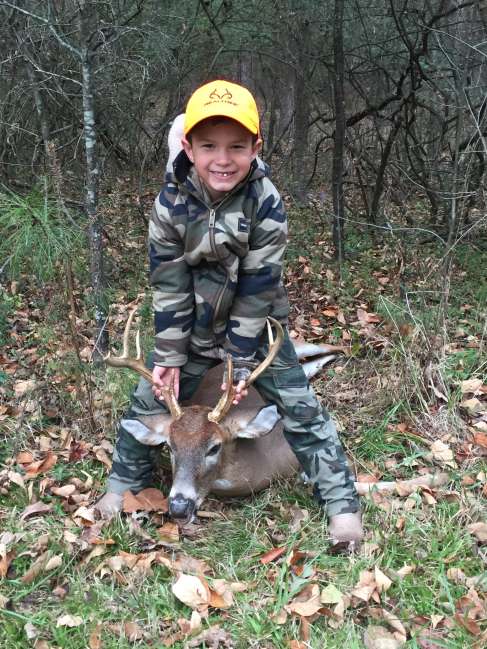 Austin Mcpherson first buck 7 years old. Austin got his first gun a ruger 223 youth and had been shooting it for 2 weeks!! He was putting rounds in a 1 inch circle at 60 yards so I decided he was ready to shoot his first deer, we had this buck on camera since the first of October ! Austin had been checking the camera and watching this buck hoping one day he would get a chance to kill it, so he was excited to go hunting on November 16 opening day for gun season!!! The night of the 15th before he went to bed he said daddy I'm gonna pray to the good lord that he sends that buck out for me to shoot tommorow, I said son he just may do that for you, after sitting in a ground blind ALLDAY with letting a few smaller bucks walk that morning about 3:45 that afternoon the buck he was hunting started coming from a distance I whispered to austin and said son here he comes, he grabs his 223 and gets him in the scope the deer come about 50 yards from groundblind and stopped broad sided ! Austin pulls the trigger and makes a killer shot , the deer run straight to the ground blind and falls dead right beside us, austin HAD TO BE THE HAPPIEST LITTLE BOYIN THE WORLD when that buck fell he looked at me and said daddy I got him!!!!!! 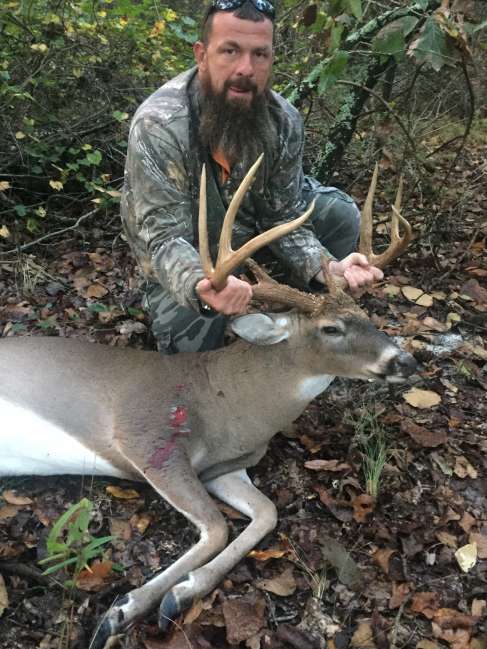 Dennis McPherson has not filled this section yet.