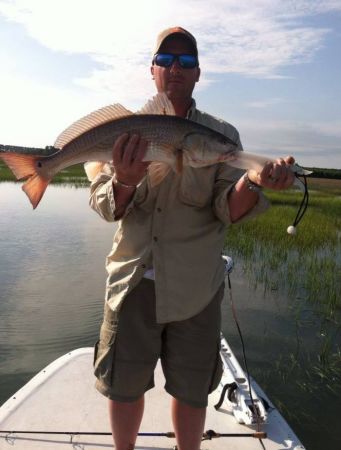 User Name
MikeBegg81
Member Since
August 17, 2015 at 5:32am
Age
39
Location
Beaufort, Sc
Hunts For
Deer and Hogs
Fishes For
Anything that will bite at the time Im there! I absolutely love catching Reds and Trout the most. The occasional shark of course and flounder.
Organizations
Leatherneck Outdoors 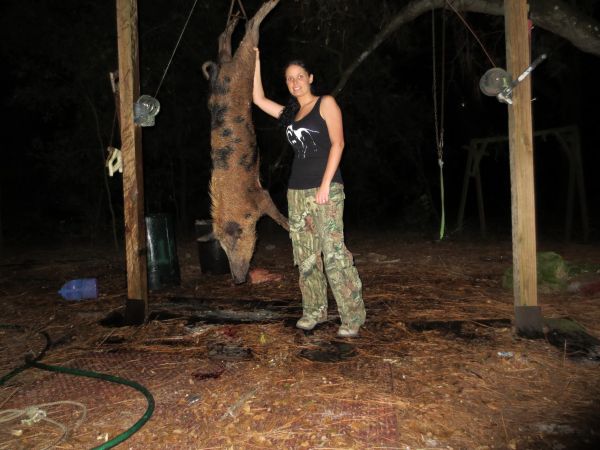 A Florida hog killed by my wife with her bow. 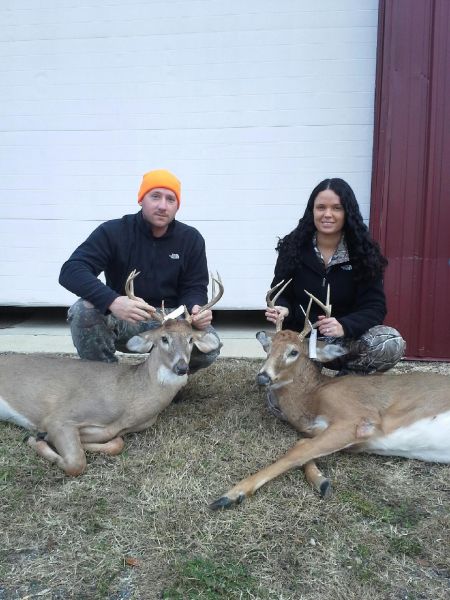 Anyone ever considered taking there wife to their sacred hunting grounds?

I know what a way to start right? Well for me it actually worked out in November of 2012. I decided that it was time for my soon to be wife to see what my obsession with the outdoors was all about. I warned her on the drive up to my families house in Maryland that yes we are going to spend Thanksgiving with my family however with the opening day of gun season that following Saturday its more of a hunting trip. She laughed and said 'Ok I'm excited about it.' I wondered if she was serious or just trying to be the sweet woman she is and go along with the flow.

So on black Friday we decided that we needed to go to the sporting goods store and get her some proper field attire. The cart was loaded up with a nice field and stream jacket and pants, actually one set for me and one set for her because I liked what they had...oh well you can always use more hunting gear. So that night we washed them in scent free soap, sprayed them down in Scent Killer spray, hung them outside to freeze over night. That opening morning it was 18 degrees out. I immediately regretted hanging them outside. We got dressed and I went to warm up the truck. She looked at me with a serious look of anger because it was so early and I could see her lips wanting to say 'I think I'll just go with you this afternoon.' However she powered through it.

Our walk to the stand was less than awesome. I hadn't been on the property in over a year and my StepDad hung the stand for me. So trying to find it was not an easy task in the dark. We sounded like a Marching band coming through the woods crunching on all the leaves when all of the sudden....damn.

I said 'We need to be on the other side of this fence.' I MISSED THE GATE. So back down the hill we go banging and breaking every stick around. FINALLY THE GATE. I opened it up and let her through. I followed as I shut the gate. I knew where I was now, just another 100 yards up the hill to the ladder stand 2 seater. We climb up and get settled in. Now I realize I'm sweating like a hog in a bacon factory and pull out my phone to check the time. 0615 and its still dark and I'm noticing the fog.

Not more than 5 minutes later the woods came alive and we hear more leaves crunching than I ever have. She looks at me and say 'Are we the only ones here?' I told her yes that somehow we snuck into the deer's bedroom and they are waking up. The sun starting to peak over the tree tops still leaving the woods and bottoms shaded and darker, we hear 'CLACK CLACK CRACK CLACK.'

At this point I'm falling apart because I look 10 yards in front of me and I have a doe staring into my eyes and I hold my wife's hand and whisper don't move! The doe stomps and stares at us for what seemed like 5 minutes while the noise in the bottom continues. I realize at that moment we have a fight on our hands. The doe walks down the hill into the bottom and points us to the noise. It's two 8 pointers getting after it! The secondary rut was hot! I looked through my scope and find the larger 8 pointer staring and posturing up on the other 8. I put the crosshairs right behind his shoulder and let my muzzleloader do the negotiating from that point. He dropped in his tracks.

My wife looks over and says 'Mike, that was awesome, but why are you packing your bag?' I told her that we were done! I killed a buck the first morning....

I thought I was going to get a boot to the chest as she said 'Reload the gun, we're not leaving!' I obliged and reloaded, to be honest I was a little scared of her at that moment.

Once the gun was reloaded we sat for another 15 minutes when the leaves around us seemed to be crunching all over. She tapped my leg and said 'look its the one he was fighting'....I couldn't believe it. She said 'I'm gonna shoot, does this thing kick?' Before I could fully get the words out of my mouth she pulls the trigger and dropped her first buck in its tracks, on her first time hunting, and her first time ever shooting a rifle. It was a CVA .50 cal muzzleloader with 100 grains of powder. She turned to me and smiled and said 'Now we can go.' 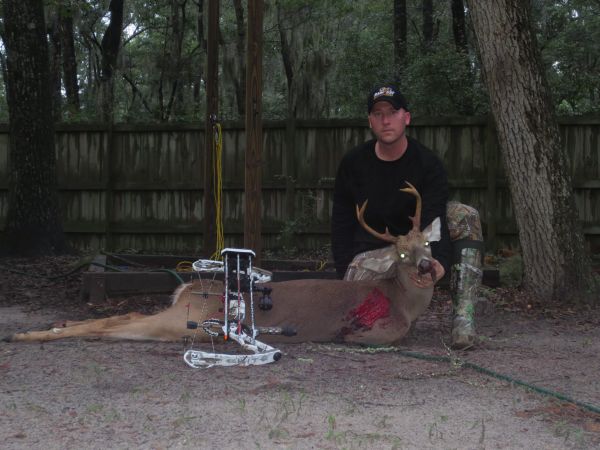 Anyone ever considered hunting from a blind with a bow in a small confined area? Here is something that may help you out. I had a particular blind that I hunted for two years in an area that you could only see 20 yards in front and 30 yards 45 degrees left and right. The woods were thick in front of me and pines to the right of that. I found that hunting wood lines like this make a huge difference. The deer seem to travel that line regularly. I knew the deer were always going to come from in front of the blind so I hinge cut two small trees to direct them to a shooting lane in front of the blind. I have killed 4 deer from that blind and every shot was 10-12 yards. I was always conscious of my scent and movement being that close to the deer. Don't get me wrong I have been busted in the blind by a few mature doe's but they are hard to fool! So if you were considering this tactic it can be very rewarding and can put food on the table if done correctly.

WOW. He's beautiful! You have done something many spend a lifetime of hunting trying to accomplish!

That's a great deer! Congrats and I applaud you for your outside the box thinking! Awesome job.

Avid Outdoorsman. First time I hunted was with a bow at age 13 alone and unafraid. I have been hooked ever since.