Big Day All Around in Rockingham County

Big Day All Around in Rockingham County 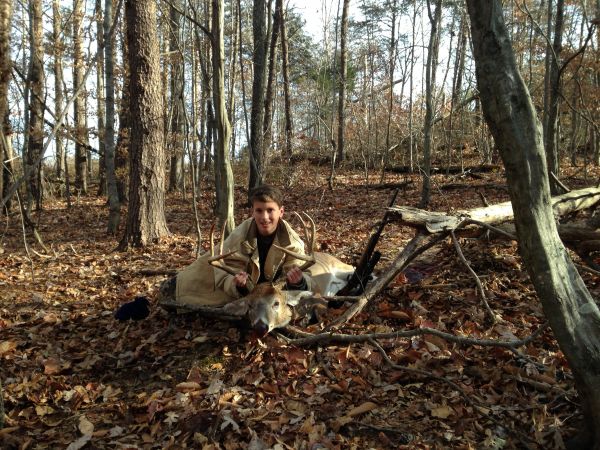 November 22nd was a big day for me and my son. I guess you could say it started 6 years ago when I bought a two-man stand so that he could start tagging along with me on my hunts. He was with me when I shot my once in a lifetime buck, an 8 pointer that scored 135. He was also with me when we retrieved the trailcam cards showing a large black bear setting up camp at our feeders for 2 days, not to mention damaging one of the cameras! That, and coyotes coming in on us and yelping in the evenings as we leave the stand plays tricks on a 8 yr olds mind, not to mention the hair raising up on my neck! That being said, for the last 5yrs we've hunted together in that same old 2man stand and I wouldn't trade it for anything in the world, except Nov 22nd. This was the day he decided it was time for him to hunt by himself. He had told me 2 weeks ago that according to some monthly hunting calender, the 22nd was the best day of the month to hunt.So as we headed to the woods on Sat. he hardly spoke a word, obviously nervous. He got in the stand with his .243 at 5:45, I put a doe estrus wick out for him and went on to my stand up the road. At 7:20 I heard him shoot followed by another shot 20 minutes later. Everything we've learned together and all the memories came to a head on Nov 22nd 2014. His 1st time hunting alone, 1st buck and a lifetime memory for both of us.

motormouth has not filled this section yet.