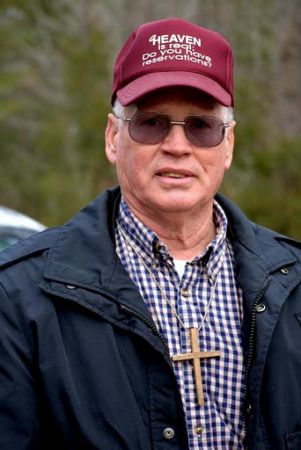 Christian Squirrel in response to a report titled:  Just for GT 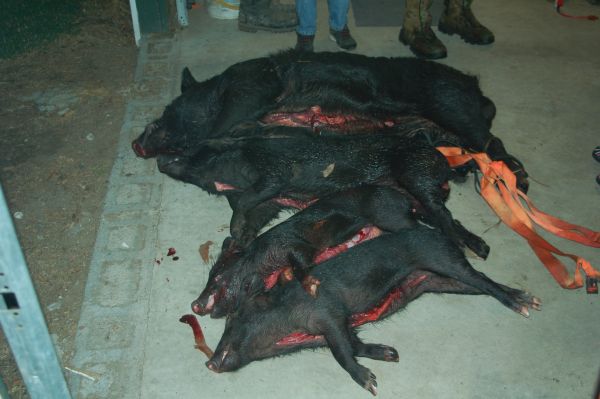 While hunting deer on a managed hunt at Currituck National Wildlife Refuge in Currituck County Oct. 1, I was blessed with what has to be a hunter's dream come true.
Situated in the scrub oaks on a marsh line between the bay marsh and inland marsh, I saw something dark running out of the inland marsh through the trees toward the bay side. Not sure if it was a horse or hog, I waited until something emerged from intervening trees. It was a black floppy eared pig. I saw down on my 5 gallon bucket, brought up the old Winchester 97 pump and cocked the hammer. A big pig emerged, pulled the trigger and down it went. I was just starting to praise the Lord when the first pig stopped and started back toward the downed hog. Let fly a second shot and it went down squealing. Saw a third smaller pig near the brush and sent a third shot.
Was so excited I think I missed it clean. When the second pig stopped squealing, I went up to it and started grunging with my mouth, and two shoats appeared out of the brush at about 25 yards. Both went down instantly under the 00 buckshot.
A big boar, head and cape was 100 pounds or more, a nice sow, and two juvenile sows.
Sometimes the Lord does allow dreams to come true.
My son helped me draw them all to the boat to cross the bay back to the Island.
We returned last week, and he shot a nice full bodied spike buck.
Would like to find some hog hunting areas nearby since the refuge hunt is over.

November 02, 2012 at 1:29pm
A comment titled: Christian Squirrel in response to a report titled: Just for GT

This ain't no magician, he's just giving thanks before biting in.

January 21, 2013 at 2:31pm
A comment titled: Season in response to a report titled: Swamp Squirrel hunting

Diane,
Tried to respond to your posts about the license and hunting with your Dad but the link is messed up.
Did not get a deer this year either, but hunted with our younger son the first of Oct. and was blessed with four hogs. He got a nice buck on our next hunt.
Hunted with our eldest son several times, and still no deer, but most were still a success by spending meaningful time with our sons. They have families and jobs and all, but they still honor me by hunting and fishing togther.
I know that hunt with your Dad meant as much or more to him than you.
Thanks for all your encouragement to fellow sportsmen and women.

If you can find a big oak tree dropping nuts, particularly around a park, church, etc. where the game has not scarfed them up, gather a bunch and then spread them under your beech trees. Cheap dollar store food handler's gloves prevent adding your odor to the nuts. Acorns are high priority because of abundance, flavor, and energy output; as well as its much easier to process an acorn than a beechnut. Remember the commercial, 'sometime you feel like a nut, and sometimes you don't...' If you cannot baffle them with brilliance, fake them out.

Have you talked to the folks at the BBQ restaurant at 158 & US 13. I think it was Greene's

In Chesapeake Southern Packing on South Battlefield local just before intersection with the bypass. That a fur piece from you. I think Kempsville Packing on Greentree Road in Chesapeake also does game.

Some local stores that have a meat department and cutter may cut meat for hunters after they have finished their day's cuts. They have to sanitize the blades, grinder and surfaces after handling wild meat. Then It would be up to you to wrap for freezing.

If you need someone to help hunt sometime, let me know. I usually do the field dressing, skinning, cleaning and butchering for my boys when I hunt with them. Even though the are in their 30's they seem to like me helping with the dirty work.
Wife's been right ill and Lord willing, she'll be released from the hosptial tomorrow or Sunday. Haven't had much time to hunt recently.

Would love to see something like that out there, you have a great trophy! Wish the swamps of Currituck had some like that. (Maybe they do but they are smarter than I am.)

November 02, 2012 at 2:20pm
A comment titled: Carcasses in response to a report titled: Deer Carcusses

Sorry about the slobs that only think of themselves. Maybe one day they will take a Hunter Education course and learn to respect the game, the environment, and others. I just gave a set of ribs to a widow from a deer my son got, and they were glad to get them. Sorry.

Got a beautiful child, wife, and deer. What a blessing! Congratulations.

Congratulations! That is some hog.