User Name
FairChaseNC
Member Since
October 29, 2012 at 10:59am
Age
46
Location
Raleigh, NC
Hunts For
Mainly deer, turkey and most small game. I grew up hunting the mountains of PA and have also hunted in WV, FL, GA and the great state of IA where I have roots on my mom's side of the family - hoping to pull a bow tag there this year or next (not easy to get out there these days.)
Fishes For
Love saltwater, living in S.W. Florida for 7 years, I went after everything except major sportfish
Organizations
NC Realtors Association

There have been some giants taken early season in NC so far this year but judging by how it seemingly slowed lately and from what I've seen and witnessed for many years previous, we're well into the dreaded Oct. lull.. at least in the Piedmont. from my experience, that first cold snap in daytime temps. seems to kick em out of nocturnal-ness. Prob. not a word but any feedback? 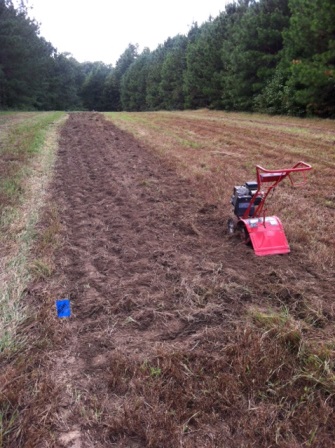 The landowner/former farmer always puts in a few acres of oats and rye for me each year but figured I'd give it a try THE HARD WAY for a little strip over-looking an isolated stand I have..I know I'll get SOME results on this one but not sure how good. My little tiller kicks butt for it's size but doesn't always go real deep..

After about 5 hours, I was able to create 1/8 acre and put down 'Evolved Harvest clover crush with some shot plot brassicas' mixed in.

Hey, I need the excercise anyway! Will update when/if it grows.. LOL

Hope I'm not ruffling any feathers by asking.. Like alot, I can't keep up with the site all of the time even though I really enjoy it as much as I can.

I guess I'm way too curious not to ask - Gobblin Tom had quite a presence on here for quite awhile. Anybody know anything?

Anyone know of a good guided hog hunt outfitter who's reasonable and reputable just about anywhere in NC. Have a friend coming down that may overpay and trying to help him out. If anyone has a referral, much obliged..

In a quick glance, I haven't seen anyone that has weighed in on here about the current legislation being considered for Sunday gun hunting. I remember last year someone made a post inquiring 'why not?' It seemed to get alot of positive response in support and I am fully on board as well.

Here in Raleigh, it's being publicized quite alot and, of course, an obviously liberal journalist had about half of the front page of the News and Observer on Saturday bashing the very thought of such a horrible idea.

I'm not an overly religious person at this point in my life but even if I was, I would totally support the CHOICE of the hunter and landowner to make the decision - not the state and certainly not for religious reasons.

Those in support should voice their opinion RIGHT NOW because the way the state gov. is handling things lately, this will be either approved or squashed in a hurry. I think a simple petition on here could go a long way... what d'yall think?

Good to see some old, familiar faces! Thanks for posting an update on a great season for you both! Good luck with the birds in the spring.

Awesome man. Great story to commemorate the short but meaningful life of your daughter. Congrats.

I'm as conservative as anyone else but yeah, the bottom line is YOU have the power (for the most part) to manage your own herd the way you see fit unless you hunt public land and if that's the case, just enjoy taking what's there - which in any cases can be some very quality bucks if you do your homework and hunt the rite spots..

I grew up in PA, still have lots of family there and believe me; when legislation gets TOO involved, the hunter gets left out of the equation.

I don't think you have to change harvest limits in order to create bigger bucks; management is the key and of course there's soil content, genetics, etc... I doubt there is a county in NC where there isn't a 130' deer to harvest so if your focus is on quality, get off your butt and go find it (may include leasing your own ground or pound the pavement to gain access to good private ground) but don't ask for legislation to do it for you.

Agree with you Mac86 - this young man's range should prob. be set up much less than 40+ yards, esp. after 2 non-lethal hits. It looks like he's got the accuracy but arrow isn't getting there near quick enough. Good to hear they are diligent in pursuing the buck rest of season...

I haven't been out since Wed. nite - lotta movement and saw bucks making scrapes and TRYING to chase but does didn't seem least bit ready. biz should pick up big time this week..

I feel what you're saying. From what I just read, enforcement officers didn't even have a clue until he confessed - it was done that well.

Awesome! My wife is 7 months pregnant so I can relate how difficult this must have been for you - CONGRATS!

Not sure there are two diff. bucks here?? Could be I guess but either way, I wouldn't think twice.

Yep, that's a good one buddy. Hope ya get him.

Welcome. Hope we get more posts from everyone this year.. last year sucked but so did the deer season.

Bring it on boys!

Yep, I enjoyed a hard day of prepping a few weeks ago. Brought home a nice lil dose of poison ivy even though I'm well aware what it is/looks like. Don't think it matters when it's that hot; all you gotta do is get close to it.

I also enjoy sweatin it out puttin up a new stand, cutting lanes, digging up a mineral lick, hanging/checking cameras. Good to hear y'all are eatin it up too. Now bring on the fall !

Yeah, I found the cure is to do the exact same thing; prepare. Went out and put some sweat on the ground today moving stands cutting lanes, etc. After several hours of re-hydration, these beers taste amazing!! -and the fever is gone... for now

Yeah man! Big day for NC sportsmen. More weekend time with family/friends in the woods is gonna be GREAT.

Thank god you boys are still hanging around here to respond to this although I hope GT DOES delete at some point.. because this jackass is getting off on seeing our reactions to their idiotic post. Good job again though to everyone here who stands up for our rights as sportsmen as well as just people providing high quality nourishment for our families through the tradition of hunting.

By the way, if you haven't already, here's the Facebook page to support the new legislation for Sunday hunting:

I'm with ya boys. Now see some new names/faces posting pics w/ turkey success - congrats to all. Hope y'all stick around.. Site has been dead for quite awhile. I so enjoy reading posts, seeing pics etc.

Wonder if publishers can put out some word to encourage more..?

I'm a real estate broker and family man with a beautiful wife who supports my time involved in sports and the outdoors. I am blessed with 2 happy, healthy sons (2.5 years and my new guy was born Dec. 26th, 2012.