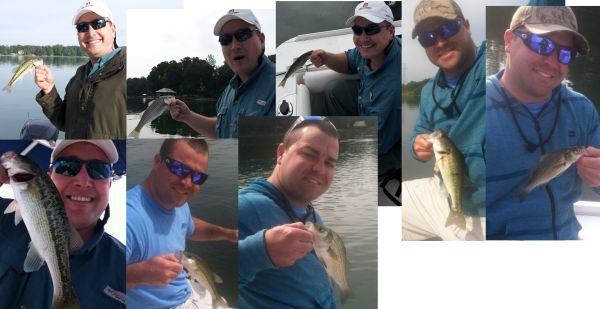 We got on the water at about 6:45am this morning hoping to catch the early bite. Loaded in just north of the 150 bridge. After reading Captain Gus' recommendations for hitting Rocky Creek for stripers, we decided we'd start there. We began throwing spinner baits, swim baits, and even a top water with no luck. We saw fish popping the top of the water all around us and tried everything in the tackle box - still nothing. We decided to troll a few baits about 50yds off shore to see what hit. Within a few minutes we had our first catch. A smaller hybrid went after a chunky dive bait at around 6-8ft beneath the water, in 6-12 ft of water. We then set up two rods to troll with the dive baits (silver and white colors). Shortly after beginning, had a second fish on the line. We saw a lot of popping action around where we stopped so we decided to throw the bait around there. Pulled in another 2-3 within 20 minutes. We continued the process of trolling until we caught something, then casting into the area the fish originally hit, for the remainder of the afternoon. During one troll, we had a fish on each rod. It was pretty clear that getting on top of the school is what equaled a catch. Finding them is the tough part. We totaled 9 bass, but only 8 made it in the boat; all were 12' or under. 2 of them were stripers, the remaining were the hybrids. The majority of the action we saw, according to the sonar, came around a shelf where the water went from 20ft to 10ft- almost immediately, at around 6-10 ft in depth. Keep your eyes pealed for signs of bass feeding and troll through or casting into the general area.

Only been fishing Norman for a few weeks now and have had the best luck for bass on dive baits, swim baits, and spinners, all in light colors. Even had a catfish chomp on a friends spinner bait a few weeks ago.

Would love to hear what others are using and their tactics. Will be using a downrigger next trip to get the bait as deep as possible. In our experience, the closer to the bottom, the better. And hoping the deeper the water, the bigger the fish!

TrophyBass07 has not filled this section yet.