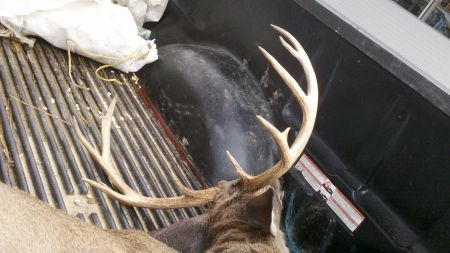 Ducks in response to a report titled:  ducks

Well the first swing of Duck season opens this week,I was wandering if any of you have seen any ducks showing up yet?

Just wanted to wish everyone goin out in the mornin good luck and stay safe,lets get some big uns.

Did anybody make it out yesterday to get any geese or doves?The geese wouldnt come in range for me but i did get my limit of doves yesterday evenin.How did yall make out?

Hey guys,I was thinking about getting a new wad wizard choke tube,I was wandering if any of yall have ever tried a wad wizard or a pattern master if so what do u think about them? 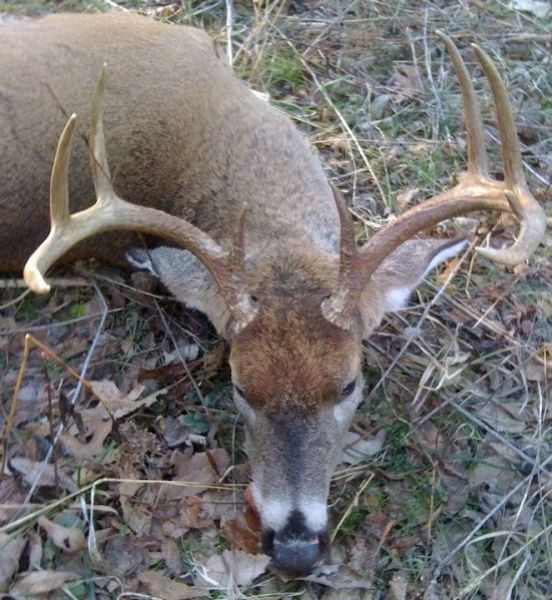 Well i got me a ruger 454 pistol yesterday and shot it 6 times at 100 yards and 5 were touching at the center,so i went to t-town GL this mornin and sat till about 8:50 and this 9pt chased two does by me i stopped him at 50 yards and shot him.This is my first deer with a pistol and let me tell you if you never done it its diffrent,and exciting. 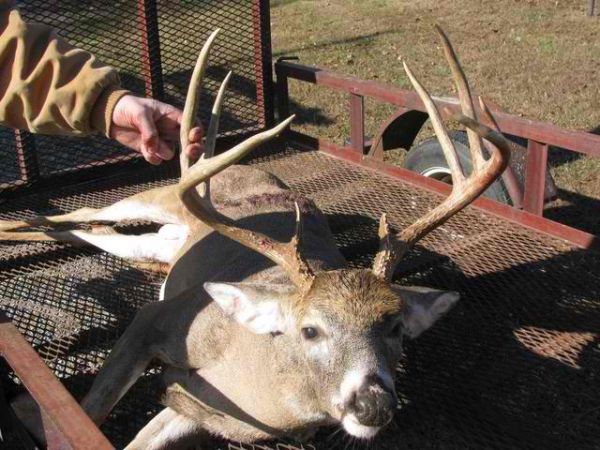 Well my GF told me this mornin she wanted to try to get the big 11 ive been huntin since the first day of ML season.We didnt plan on goin till saturday but we made it out this evenin.We got in a two person ladder stand on the edge of the field where she shot her buck a couple weeks ago.We sat there for a couple hours and about 10 mins before dark the big 11 came out about 100 yards away,she shot him with my .50 cal ML,we gave him about 20 mins and went and found blood but after 60 yards no deer so we backed out.Im takin some help and my dawgs back to track him.Ill let yall know what happens,shes got that sick felling we have all had.LOL.I told her if he is dead now he will be dead in 3 hours.update we went back this mornin with two friends and two dawgs and found the buck not more than 100 yards from where we quit last night,she hit him alittle back but got the liver.It wasnt the 11 but it was a nice 9pt ive been watchin.

Hey guys I was wandering,can you use the extra doe tags on GL. 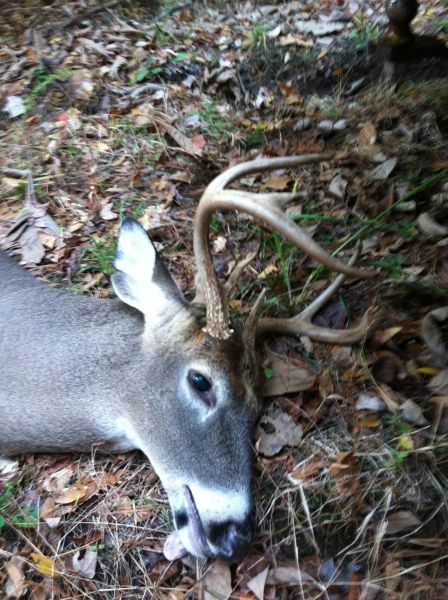 My GF has been wantin me to take her huntin so I took her this mornin to where i shot my 8 last year.We saw some does but she didnt want to kill a doe she wanted her first deer to be a buck,so late in the mornin i saw a deer on the edge of the feild and saw it was a buck and she wanted to shoot him,he was 200 yards away and she had practiced that shot so i gave her the go ahead and she shot him with my ML,she hit him alittle back in the lung and liver.He ran about 300 yards.She was excited and aready asking when we can go back.LOL. 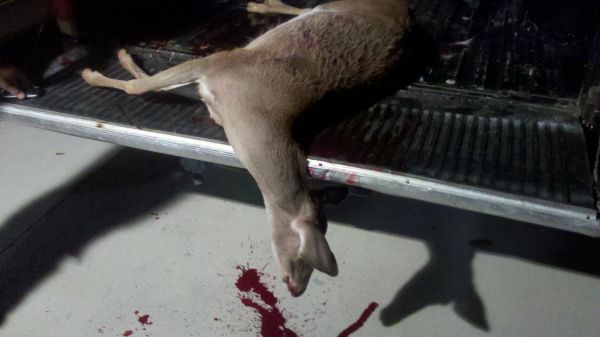 Well all i been seein is does,and since i done got two,i took my uncle and put him in one of my stands,and he shot his second deer ever a 115 pound doe with a x-bow.shot in both lungs and only ran about 40 yards. 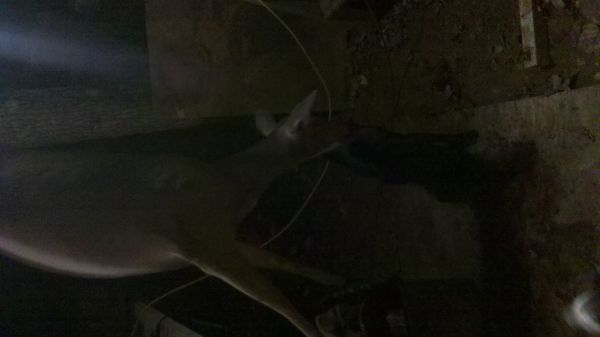 Well went out yesterday evenin after work,i got in my climber about 6:00 and it wasnt long two does came out,i shot the biggest one at 45 yards,hit her in the heart and both lungs.After i shot her i saw two more does,she only ran about 40 yards.

Have any of you ever deer hunted with a .357 handgun?If so what bullets do you recomend?

Does any one know when the drawing for the swan permit is.

Hey guys,have any of you ever tried the atom broadheads,they just dont look like they would work that great to me. 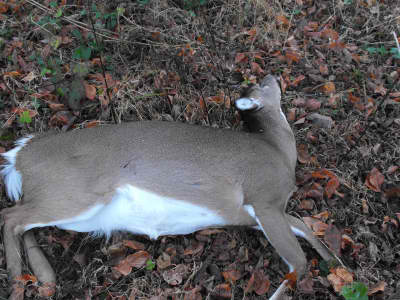 Well ill be second,i had three does come in this evening to the corn pile and i wasnt gonna shoot but i decided to go ahead and get on the board and put some meat in the freezer,she only ran about 65 yards after the shot.

Well guys how did everyone make out for the opener today.

Hey guys just wandered what shells you use for dove hunting. What brand,shot size etc.I think im gonna try the new winchester super dove in 8 or 9 shot because of the speed.

Anybody know any where open to the public to dove hunting opening day and that monday.

I found a dead 4 pt yesterday and his whole neck was black and his hair was falling out.any ideas what this could be? 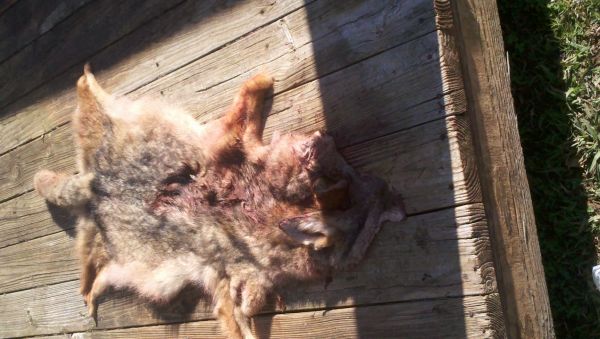 I went out scouting a little this morning and i never leave my gun at the house for this reason right here.shot at 208 yards (ranged)one shot from my 7 mag across a field.

have any of you been catfishing are they bitting?

Good luck GT,I aint seen nothin in none of the holes they are usually in this time of year,maybe they will show up before sat,it comes in tommorow,I might try it one mornin before work,good luck to all whos goin after em this week.

October 01, 2013 at 10:34am
A comment titled: Vid in response to a report titled: Great Bowhunt in Rockingham and never reached for my Bow

Thats some great video you got GT, like you said those are the best times,good luck on getting a big one.

Congrats on the great buck,I like the color on his antlers.

Like GT said there is alot of good gL on river rd,I used to hunt there every weekend but I dont hunt there as much any more.If you have a boat there are alot of great spots that you can only get to by boat.Ive killed a couple nice bucks for GL up there over the years and alot of does and smaller bucks,my 2 biggest bucks from there is a 100 inch 8pt i killed in 2010 and a 115 inch 9pt last year,good luck and stay safe,hunting GL is not easy.

congrats on the doe viper.theres no way I could ever hit a deer at 100 yrds with a bow,but I guess if you have practiced it you can do it.

congrats on that big 6

Im sorry Diane,GT told me about this and I know how you feel we all do it at one time or another,I told GT I wish I was closer to you and I would have took my dogs up there,if the deer is dead they will find it.But anyway hopefully your dad can find him soon.

September 22, 2013 at 10:27am
A comment titled: nice in response to a report titled: First Crossbow Buck

congrats on the great buck

September 22, 2013 at 10:19am
A comment titled: meat in response to a report titled: Rage Chisel Tip bean plow

congrats young lady,thats great that you got her hunting and with a compound!!great shot also

congrats on a great buck man,hope to see goffy on here soon,goodluck

September 18, 2013 at 5:53pm
A comment titled: Baby girl in response to a report titled: SNAKEZILLA

Congrats again man,idk about a boy but there is just something special about a girl,mine just turned 1 years old and i got a boy due in Dec.

September 17, 2013 at 9:38am
A comment titled: Baby girl in response to a report titled: SNAKEZILLA

Congrats on the baby girl man,is it your first?

Thanks rage,good luck to u to.

September 17, 2013 at 8:00am
A comment titled: Nice in response to a report titled: Every Little Girl's Dream

Congrats on the great buck,theres nothin like spending it with the ones you love

September 17, 2013 at 7:51am
A comment titled: Keeps on and on in response to a report titled: OPENING DAY TAG OUT IN 10 MINUTES RANDOLPH COUNTY

@get a life,I for one can prove u wrong because i have asked for GT's advice a few times as well as many others have.And as for saying 'congrats but i wouldnt have' how does that show a know it all or being jealous?Because trust me I am neither a know it all or defiantly not jealous. I hate when people sign up on here and there first comment is talking sh$$ about someone they dont know nothin about.@appmtnhntr,since your so observant on all the comments maybe you noticed that GT was not the only one who commented about this matter? But im done.smh

September 16, 2013 at 10:27pm
A comment titled: Rattler in response to a report titled: SNAKEZILLA

September 15, 2013 at 7:53pm
A comment titled: @bowhunter95 in response to a report titled: OPENING DAY TAG OUT IN 10 MINUTES RANDOLPH COUNTY

@bowhunter95,If you dont care about our opinions why did you comment about it?Nobody cares about your opinions either,as for you saying we put our comments where they weren't wanted,well this had nothing to do with you so why did you put your comment where it didnt belong?

Congrats to both of u on a great buck.

Congrats,glad u were able to find that great buck.

Im 20 years old i love the outdoors,but mostly hunting and fishing.I love spending time with my family and i cant wait to see my daughter kill her first deer.