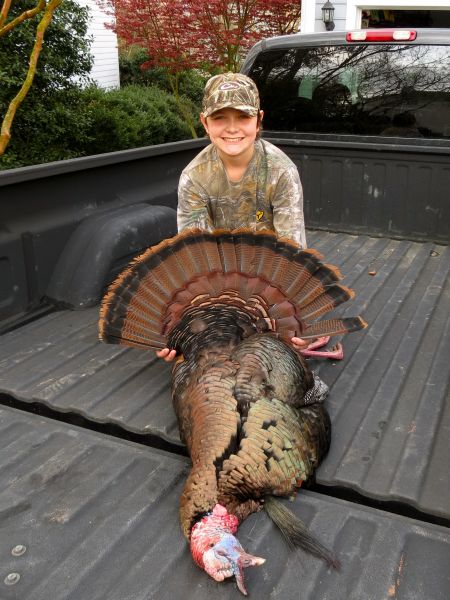 First ever gobbler taken during youth hunt. Spotted the gobbler about a half hour after sunrise. He was strutting for a hen in full display about 300 yards from us. About a half hour later a second gobbler appeared about 150 yards in the opposite direction and started putting on a show of his own. The first gobbler had enough of that after 10-15 minutes and bolted toward the other. I was trying to watch via binoculars and saw the first fight the second and the second retreated back into the woods. I figured now he was too far for us to have a chance. Wrong! He was worked up now and ran toward us covering the distance in just a few minutes. We had a new Avian-x Jake decoy and hen decoy set in front of us. He came in ready to do battle. With my heart beating out of my chest I whispered to my son to take his best shot. The Tom never knew we were there and my son dropped him no more than 20 yards in front of us. What an amazing experience!

Heading down with a Boy Scout Troop to fish the Oregon Inlet - Kitty Hawk area. Staying at the local campground on the beach. Anyone have input as to what we might be targeting from the beaches and what the best setup would be? Any advice would be appreciated to help the troop land some fish. 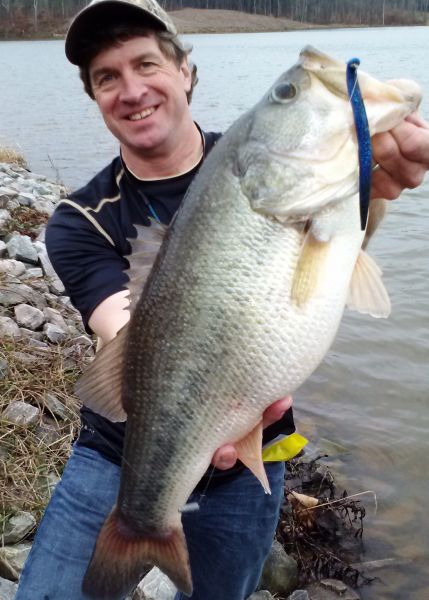 First big girl of the year Had to make a cast or two with the milder weather this past week. First fish of 2013 gonna be hard to beat. This ranks either 1 or 2 as far as my personal best is concerned. No scale and I quickly released the big girl. Measured about 20 inches long but had a massive girth. Big Fat Pig :-) 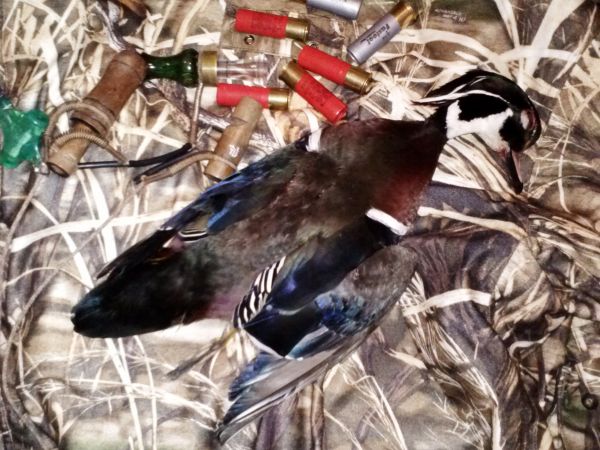 Found my lucky hunting shirt so I had to give it one more shot this afternoon. Most of the area was iced over but found moving water from a small creek. Managed to drop my first NC duck on the last day. A nice drake Woodie. Looking forward to opening day.... 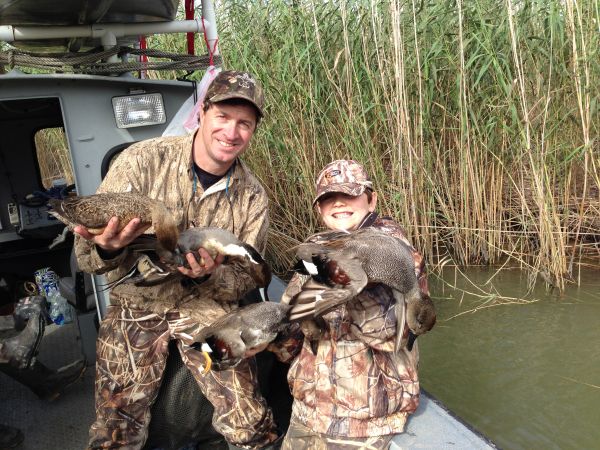 Just wanted to share a few pics from this season. I had to travel back to south Louisiana to shoot some ducks this year. I've lived here a few years and am just this season trying to find areas to duck hunt. I'm scouting the local lakes and game lands to try to find a decent spot to take my son. So far, coots on Harris lake has been my best success. Anyway, here are a few shots from a weekend trip to Pass-A-Loutre WMA during the Christmas break.

What is the outlook for tomorrow? I'm seeing a fair amount of new ducks on the local ponds/lakes.
Anyone else seeing any new birds? Saw Ringnecks, Gadwall, Wigeon and Mallards this afternoon that were not there a few days ago :-)

Thanks for the reply...Looking forward to a great weekend on the beach.

I rebooted, re-installed Internet Explorer, updated my flash player, replaced my hard drive, bought a new laptop...still can't get the dang thing to play. Wish I could see it to see what is sooo funny!!!
:-)

I moved here from Louisiana and hunted on Sundays my whole life. Was very surprised to find out you could not hunt on Sundays here in NC. I can't imagine the uproar if someone attempted to stop hunting on Sundays in the predominantly Catholic south. Tell me again, what exactly is the reason?

Smiles all around and a nice bag of ducks. Love that pintail :-)

Too loud at the Super Bowl party to hear this one. I would never get out of my truck or turn off the key until I had heard 'The rest of the story'. Thanks for sharing.

It's in your blood now...and probably always has been. It just had to be released. lol. There's just something infectious about seeing these birds in flight and cupping into your dekes that will keep you up at night, especially the night before you are going hunting (I never get any sleep). I did not venture out at daybreak yesterday but could not resist 1 more go at it in the afternoon. Glad I did as I found a small patch of open water. There were quite a few bands of woodies working the area. Plenty enough to get the adrenalin pumping...but only one came close enough to come home with me. Take care...

You mean my double secret, triple probation, never been washed, lucky Pintail shirt? No way! Actually, I can't find it since returning from this trip to New Orleans/Venice, La. Hopefully in turns up in one of my friends' (or mine) duffle bags. Otherwise it's a mandatory trip to Bass Pro Shops to get a replacement. I've been following the posts and that green wing you shot is a cool looking bird as well. My only recommendation is to be selective on the birds you put on the wall. The reason I did not mount the bird in the photo is because I already had a pintail mount (1st ever pintail) but it was a drab young bird. No comparison to this one. Congrats on your first season of duck hunting. Sounds like you are officially addicted to QUACK!!!

This is from the previous season. Same area...same shirt :-) This was by far the best Pintail I had ever shot. It was a full bodied, full plumage bird. Had never seen a pinner this big. Did not get it mounted myself but traded with another hunter that wanted to put it on the wall. Some years you are covered up in pintail down there but the limit is 2 per person. You spend the rest of the hunt watching bands come in and out of the decoys. I've heard they're plentiful on the NC coast as well but have not made any hunts out there...yet. They're my favorite duck to shoot.

Out of town for the opener...Could not make a hunt

Although I've lived here several years now, this is the first year I've actively started scouting around for a place to hunt. My son and I were on Harris on Saturday and covered just about the whole lake and saw nothing but coots - and plenty of them. I'm not too familiar with the area or the technique around here but from searching the reports and forums I've found it seems to be a guarded secret. Seems people simply asking for advice are labeled 'cyber scouters', whatever that is supposed to mean. :-). I guess that comes with the territory when most of the huntable land is public and competition for a spot is high. I was expecting to see some ducks, divers at least, but possibly all of the boat traffic keeps them from hanging around too long. Wish I had a 'secret spot' to share...but still looking myself. Good Luck.

ShallowMindedNC has not filled this section yet.