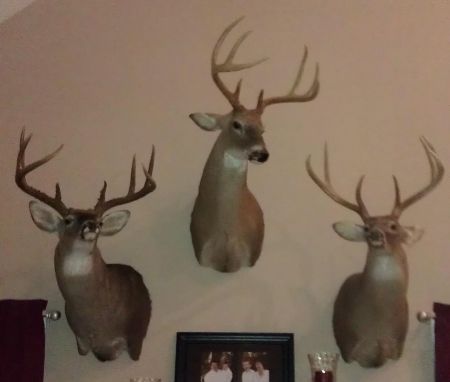 User Name
Tagone
Member Since
September 27, 2010 at 7:32pm
Age
49
Location
Kenly, North Carolina
Hunts For
I love Deer Hunting
Fishes For
If it swims i try to catch it.
Organizations
N/A 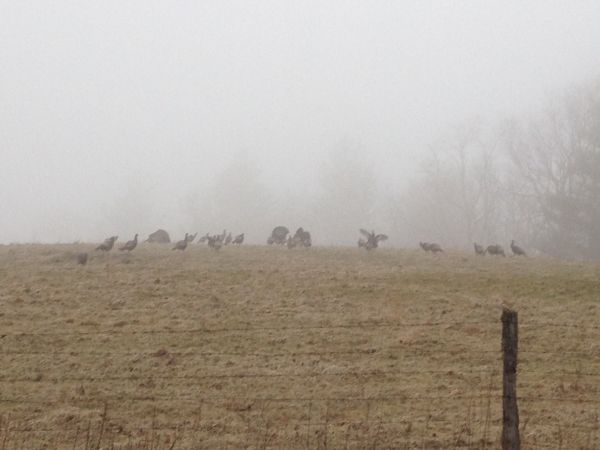 Ran across these birds this morning on Blue Ridge Parkway. Sorry it was a little foggy. But WOW!!! Cool birds. I couldn't count them all. Several had already crested the hill. It's the most I had every seen. Maybe this will get some of you fired up. 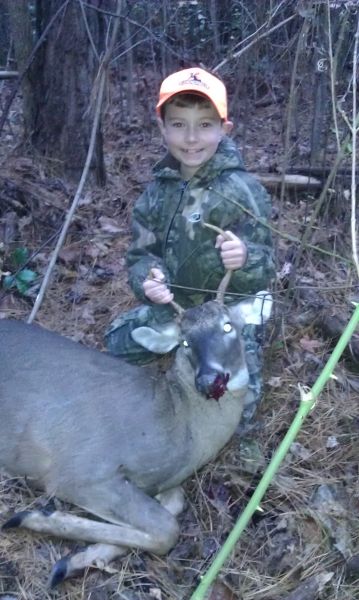 What a morning. This is what being a sportsman is all about. This is Cameron's first buck. The excitement we shared this morning was priceless. We had this buck show up at 7:10. With hands shaking and our hearts pounding he made a fantastic 80 yard double lung shot. With his new 7mm08. Can't wait to see this buck on the wall beside his doe. Jerky Time!!!! 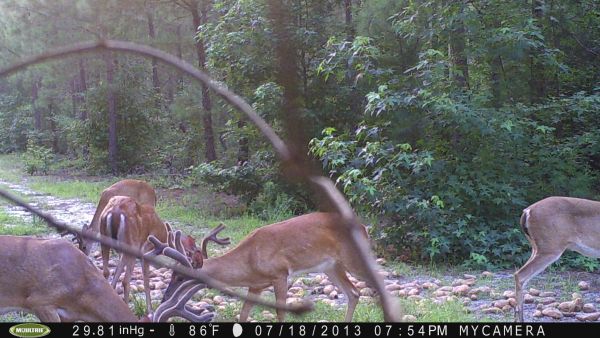 Sweet Potatoes are drawing them in. Looks like we have a few decent boys in the crowd. 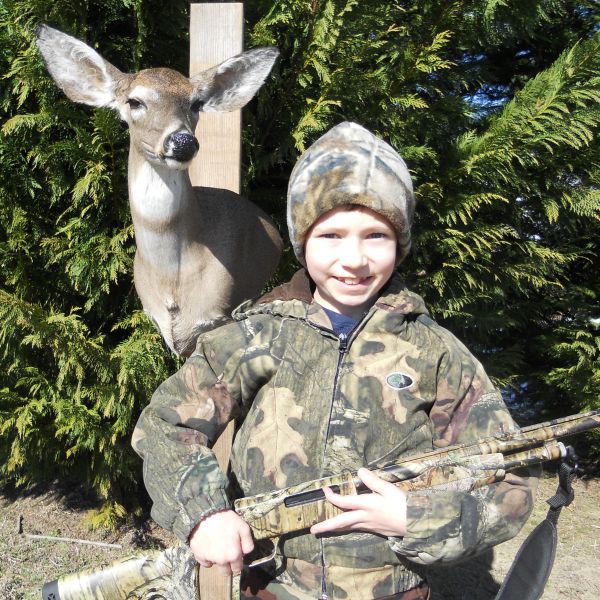 You Guys may remember. This was my sons first deer harvest. I said that I was going to mount it. So here it is. Now maybe he can add one with some horns next year. He had several encounters with bucks this year. It just wasn't meant to be. None the less... My most memorable season to date. To have my heart race along with his on each of these hunts was something special.
I am so thankful God Blessed me with such a wonderful son and a wonderful life. 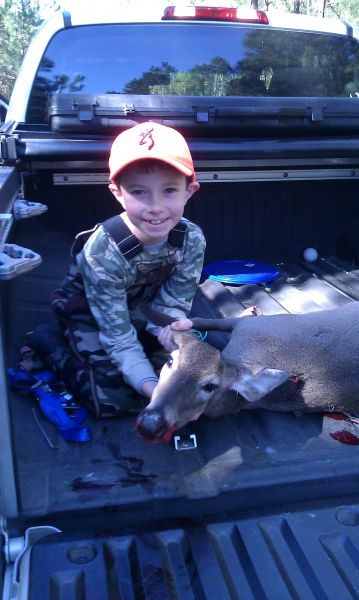 Well guys my son Cameron got the hunting fever last season on squirell's. All spring and summer he talked about wanting a deer. Well this morning it finally happened for the little guy. Not the best shot but got the job done. It started at 4:00 am this morning he never hesitated about getting up. Got to our boxstand at 6:00. We saw several deer between 6 and 9:30. None offered ant shots. At 9:30 he said he was ready for breakfast. So we began to pack up. Well I looked up and had a doe locked on us. She busted but never blew. I said Well lets go anyway. At 10:00 I began to climb down. On my 3rd step down I looked to my right and this girl was wondering what the heck I was. Climbed back up to where I could hand him his .300 blackout. He puts it on her and fires the shot. I look at her to see her down and trying to get back up. Needless to say he was one tickled little boy. And I was one pround Dad...And Yes she will go on his wall. 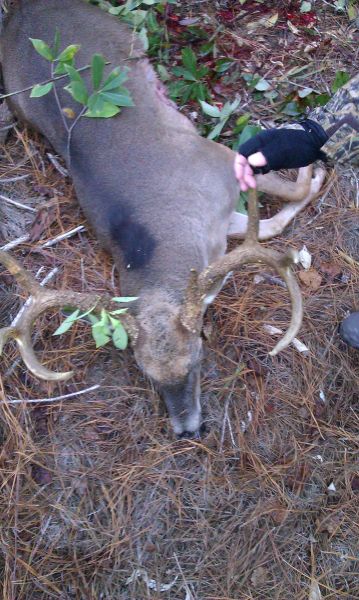 Guys this is a buck I killed last year. Looking back at the photos today I remembered how much black this deer had on his back. Have you guys ever noticed a color phase like this on any of your deer? 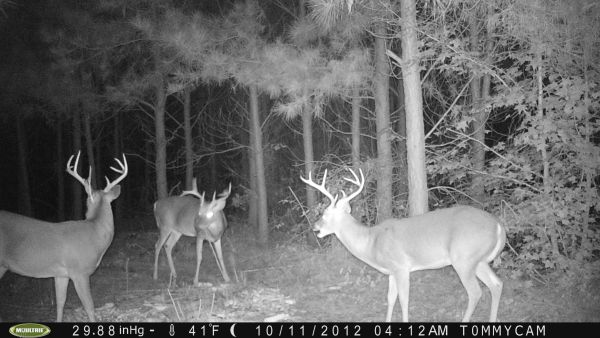 Enjoying some sweet potatoes and corn. What do ya'll think? Any shooters here. Anybody else feeding taters. 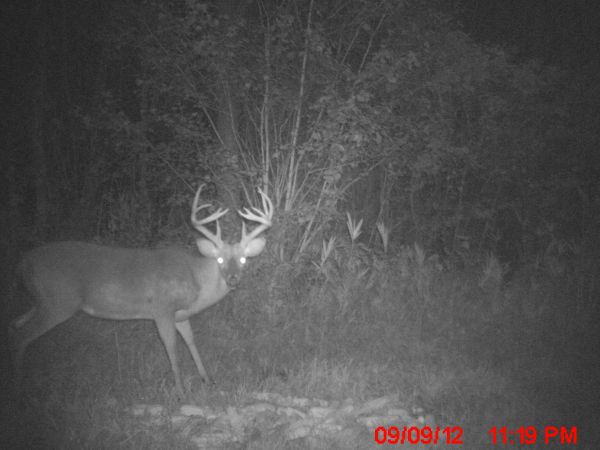 The guys and gals have been saying it for weeks now. After 8 weeks of not seeing anything. Look what has finally showed on one of our cameras. Be patient with your spot. The bucks are going to break from these bachelor groups and spread out. Now if I can just get well enough to get after'em. 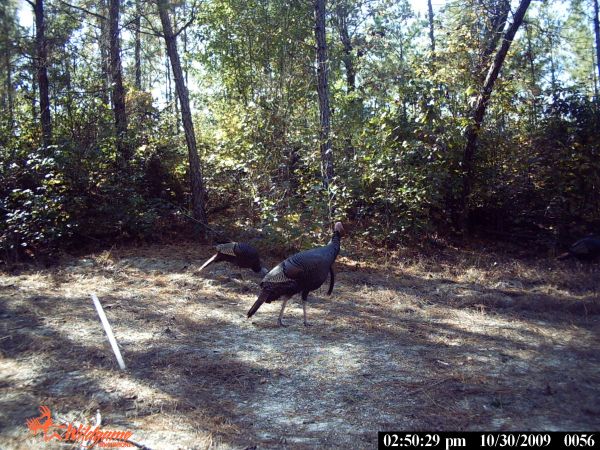 GT your passion for Turkeys has inspired this post. A Few Turkey's from earlier this season. First Turkeys ever on camera. Yes the year stamped is wrong. This camera stoped taking night pictures so I put it out just for daytime pic's. I have never hunted for turkeys so can't tell you if he is a good one or not. I have seen this flock for about three years now. Might have to give it a try someday. 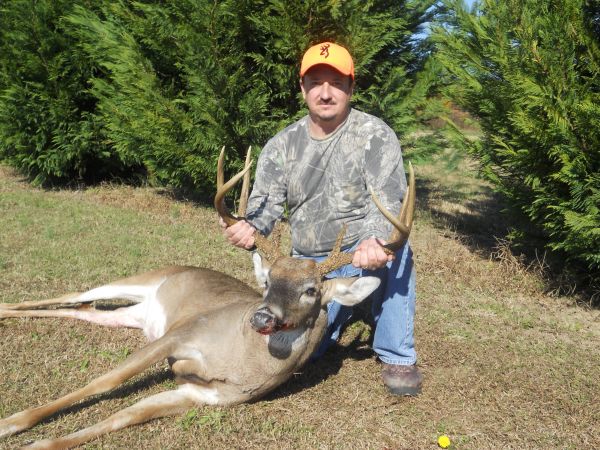 What a morning Guy's. Shot this Big Boy hot after a Doe.I'm still shaking. 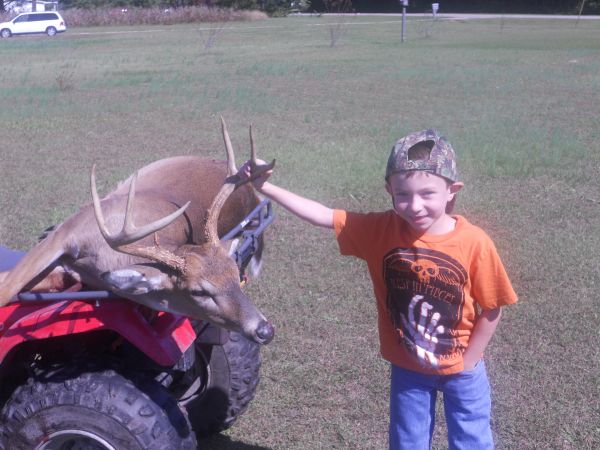 TAGGED ONE....
What a beautiful morning. Thank You Lord. I had deer all over me this Morning. Had this one come out at 10:00 for the second time. I had seen 4 bucks by 8:30. and 11 different deer by 10:00. I was beating myself up for passing on him at 9:15 or so. Around 9:00 I had heard him and his buddies sparring and tearing up some trees just out of site. Minutes later had some really nervous does and fawns hit the lane I was hunting. From experience I new an eager buck was near. Although, I know none of the does were ready breed it seems to be more of a game to the bucks than anything I guess. The does were back and forth, on the lane then off lane just running all over the place. Then out pops a nice wide 6 point followed by freaky looking 6 or 7 both from earlier and then my 8. I was undecided wether to shoot or not. I chose to let him walk. I just couldn't tell. Later grunting as he pushed another doe and 2 fawns out. This time that little voice in my head said shoot it. We have a 15 inch inside rule in our club. He made it 15 1/8 on the inside. Not a bad buck for opening day. Backstraps on the grill tonight. I hope everyone had as good of an opening day as I have. 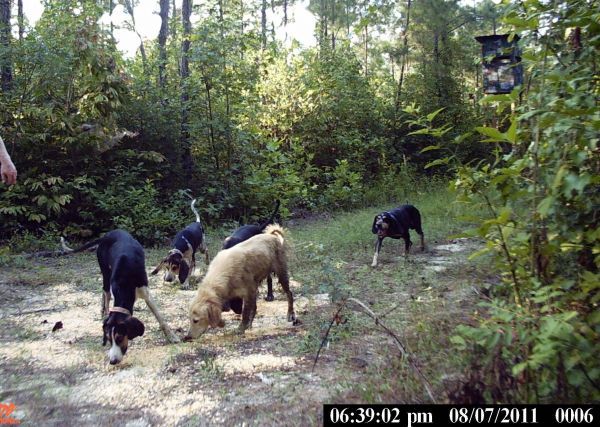 Hey guys 1rst post.Hope this works. Thought this picture would make GT feel better about his stand. 'Nice herd coming to the corn'

Congrats Huntman5!! That is a fantastic buck. Definitely looks like and old mature stud. Reading your post I could almost hear your heart pounding as you were searching through the branches looking for what made all that noise.. I love it when those big boys are making their presence known. Judging by your smile I can only imagine what dads smile looks like. lol congrats!!

November 12, 2014 at 5:32am
A comment titled: True Trophy in response to a report titled: First Deer

Beautiful mount of an awesome buck. You did good dad. I know she is tickled!

Looks awesome Huntsman! Love the pose and detail. Now you can look at him everyday.

Looks like you guys had a great time. Glad to see you making memories with the kids.

That's a nice cat there cuz!! Bet he put up a good fight. Good to see ya on here again.

I'm with Jack. I'm jealous too. I know that had to have been a heart pumping experience bagging 2 birds. Congrats guys!!

Nice bird mom!! Give us a little play by play.

Nice bird Jeff! Nice seeing the birds posted on the site these last 2 weekends. Wishing we had more birds in our area. lol.

That's a nice bird!! Way to go Huntman!! Sounds like you guys make a great team. I can only imagine the excitement you guys shared. And I bet both of you were already awake before the clock went off that morning knowing where that bird was. Congrats to both of you guys!!

I hear DCB! That is a nice boar. Congrats! Be sure to show us the final mount. Maybe pops can get him one now. Lol.. he will have to do the counting next time right.

You guys are ready because yaw have all the turkeys in a pen somewhere..lol

I was wondering when you were going to post some fish. Nice bass!

So sad to hear about the passing of Creek07. I always enjoyed reading his post and comments. He always had a kind message for everyone. My heart goes out to his family and I will keep you in my prayers. You will be missed Creek07....

December 28, 2013 at 5:58am
A comment titled: Praying in response to a report titled: Need A Miracle

Creek we are praying for you. Get well buddy!!

I hear ya!! Congrats on a nice pair bucks!!

I have not yet. I have let a few walk including a big 8 hoping my son could take him. He did shoot a cowhorn last Saturday. The club has had a tough year so far. I've had some nice bucks on camera just will not move in the daylight. We have had a couple of stray dogs to just absolutely terrorize the deer this year. We gonna have to do something about them. They run day and night. I see you have been busy on them tough. Take care.

Cjmetcalf .. He would agree. It's all about the name. He was definitely proud of his buck. He is already asking 'Dad have you started mounting my buck yet'... Now he is talking about getting a duck. What next....

All you need is a little luck. That is a awesome set of horns. Congrats Dr Bass!!

I hear ya young lady!!! I don't blame you dad I would mount it too. Congrats girl. You will have to post a picture of the mount.

I love the outdoors and all of Gods creatures.