orange in response to a report titled:  muzzleloader kill 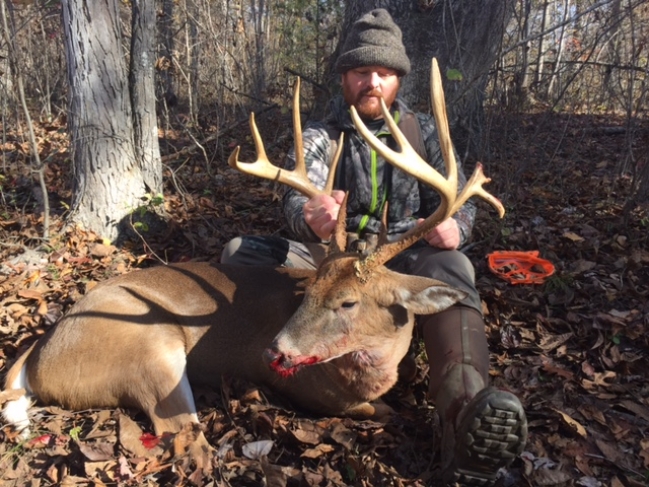 After letting many of bucks walk the past 7 or so years, I finally engaged on the largest on cam. It's been quite some turnover in properties the past few years in Burlington, NC, but I finally connected on the opening morning of rifle. I had him on cam, on a different property, but he showed up at 930 am along with some small cowhorns. I was watching the smaller deer enter my food plot and noticed good horns about 50 yards to the right of them on the edge of a beaver pond. I put my binos up, knew it was the big deer and laid him out about 30 seconds later....Craig Hall Taxidermy scored him out at 144'. His left G2 was busted up, so he would had been high 140's. Regardless I'm still riding high. He weighed 187 lb on the biologists scale.

He's not quite done growing here in this picture, but he sure is close. He adds 2 small droptines on his left side right before he sheds.

September 22, 2012 at 5:27pm
A comment titled: orange in response to a report titled: muzzleloader kill

What part of Northern Orange? I have a lease in Cedar Grove, right on the Caswell line. Looks like a 10 we have had on camera maybe. PM me back..

big dave has not filled this section yet.