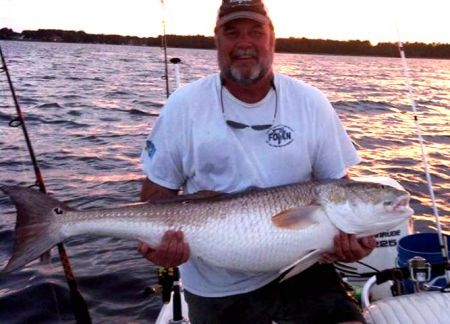 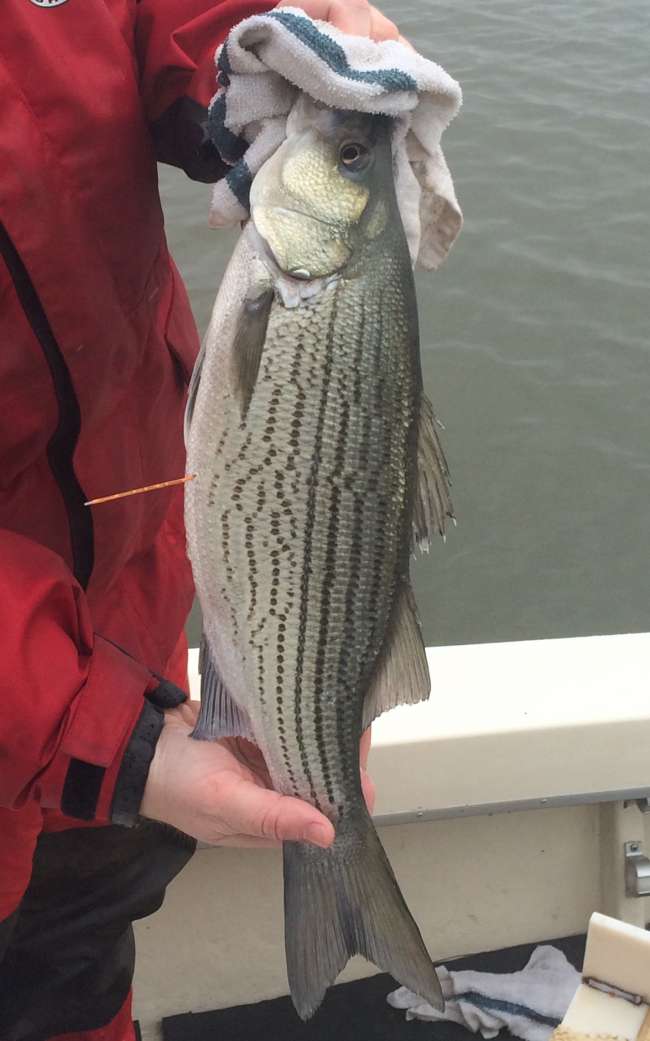 Winter water temps have finally reached 'normal' range for this time of year, mid-to high 40F. Active schools of hybrids are feeding aggressively along the main river channel, with stripers, spotted bass, and large white perch in the same areas. My charters have been producing up to 30 fish mornings with cloudy days most productive. Multi-hook rigs with 1/4 oz. jig heads & 3-4 inch swim baits are effective, but bucktails and roadrunners with worm or curly tail trailers work too. Live bait or vertical jigging is good when one can stay over the fish. Shad and herring colors are always good, and I like the Saltwater Assassin colors 'chicken on a chain' and 'hot chicken'. When in doubt use red on white, or chartreuse. And remember - tagged hybrids are worth $100 each if you call the 800# on the tag! 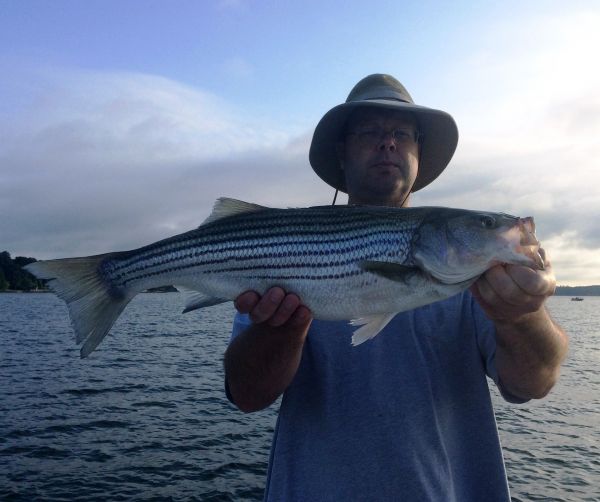 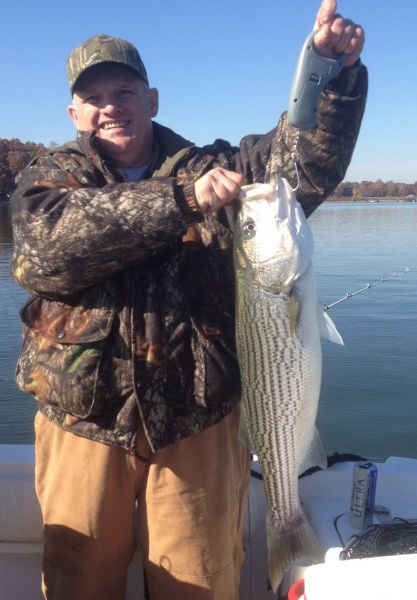 The striper fishery on LKN may not be all the way back, but it's on its way. The new hybrids are doing great, with good topwater action many days. They can be caught deep on live bait or artificials when tehy are not near the surface. The stripers that remain are good size, for LKN, with 10-13 lb'ers mixed in with the 5-8 lb. fish. Though the hybrids are reaching legal length, please practice catch and release if possible to help the first couple of year classes continue to grow. Fish On! 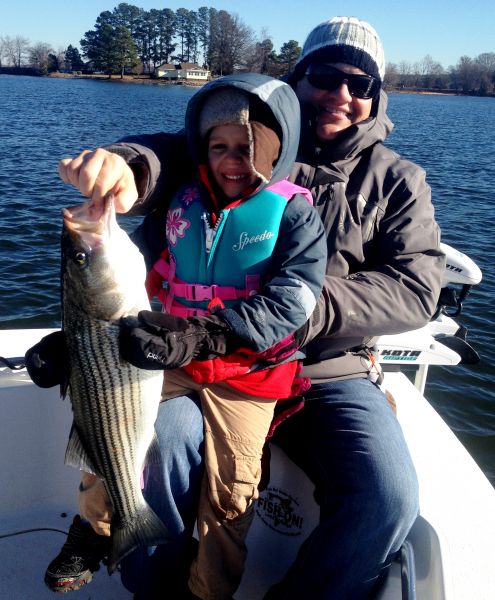 Winter fishing is going very well at both Norman & James. On Norman, spotted bass, stripers, hybrids & cats are feeding aggressively on large schools of small shad & herring midway to the backs of major creeks in 20-50 ft of water. Match the hatch with live shad, herring or shiners fished throughout the water column as needed. Numerous artificials are effective - jigs, Alabama rigs, crankbaits, roadrunners and bucktails all work. Water temps are in the upper 40F range.
On James, the smallmouth bite is very good most days when the water isn't too cold( 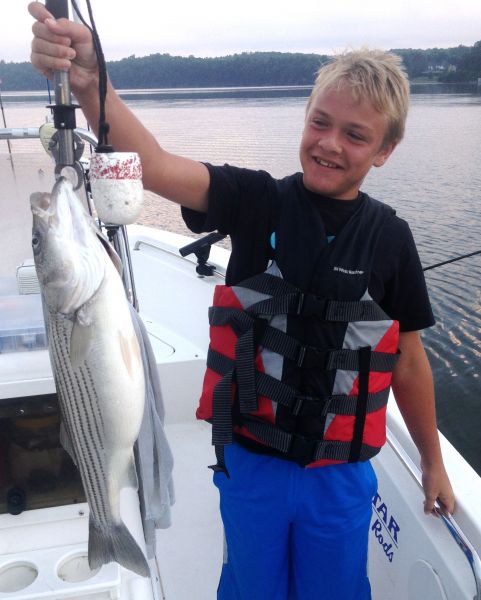 Summer patterns are in effect. Lake Hickory stripers can be found on main channel points on the lower end of the lake, or in holes up in the river. Live herring are the best bait, but gizzard shad work too.

Lake Norman has big schools of white perch near the backs of coves and creeks in 20-30ft of water. Spotted bass on main channel points on the lower end of the lake. And stripers along the main channel down south, or in holes up in the river. Catch the perch and spots on crankbaits, spinners, topwater, or minnows. Try umbrella rigs or live herring or shad for the stripers. Use the white perch you catch as bait for big cats, bass, & stripers. Fish On! 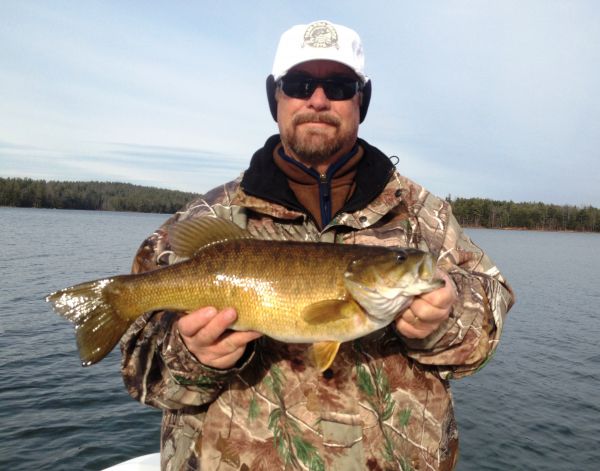 Another guide, Bob Green, recently showed me the techniques for catching trophy winter smallmouth on Lake James. I've been up there several times in Jan-early Feb and though the bite has been a little sporadic on the days I've been there, the bigguns are certainly there to be caught. The technique is fairly simple & correlates to striper fishing with downrods. Med. size shiners fished 28-35' deep in 25-50ft water work fine. Fish On! 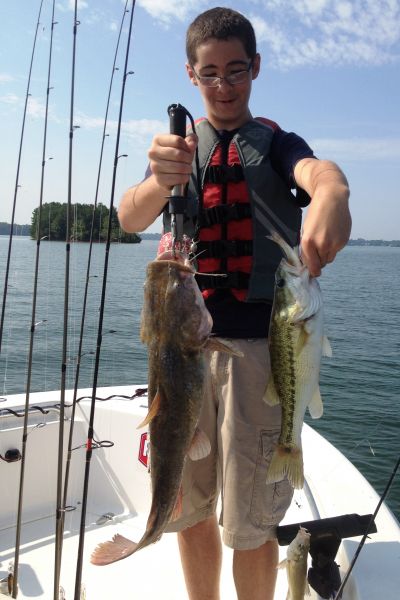 The spotted bass, perch and catfish bite has been excellent, especially in the recent hot weather. Half day trips are producing up to 300 perch along with limits of spotted bass and largemouth to 4 lbs. plus flathead and blue catfish in the 5-10 lb. range. Larger cats and a striper or two are added bonuses. Main channel points and adjacent long coves, and the mouths of major southern creeks are most productive. This summer pattern should continue into early September. 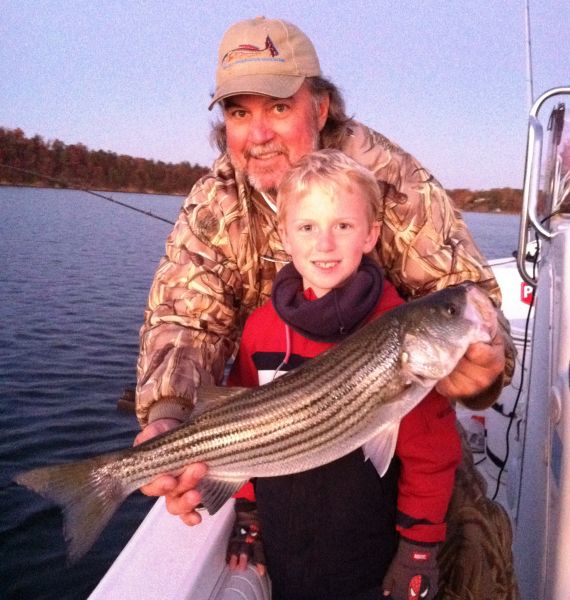 Huge amount of bait(herring) continues to dump out of the creeks into the main river. Stripers are roaming the channel feeding aggressively - shallow at dawn & dusk, deeper when the sun is high. Look for bait & fish from Gunpowder Crk. south to Oxford Dam. Live herring work best but trolled artificials are also effective. Always have a 'throwing rod' ready to cast to surface feeding fish. 3/8-1/2 oz. bucktails, redfins, jigs with plastic bodies(paddlle tails, curly tails, or flukes) allwork well. 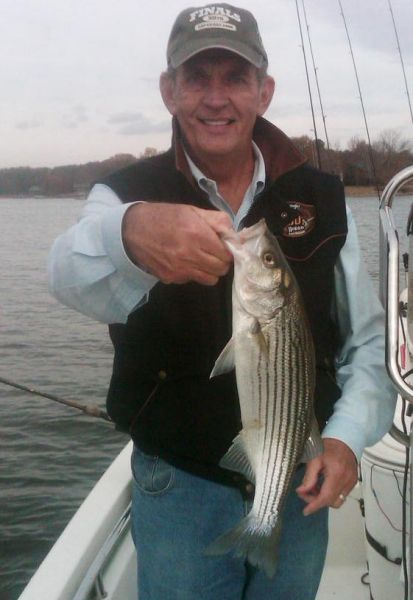 With water temps in the low 60 to high 50F range, fishing has been very good to excellent at both resevoirs. At Norman, mixed bags of spotted bass, perch, stripers & hybrids are being taken on live bait and jigs in 25-40 ft of water, in major creeks and big coves off of the main channel. The fish are keying on small shad & herring newly hatched this summer. At Hickory, stripers are feeding on herring in the main river channel from the Hwy 127 bridge south. The bite is fairly close to the surface at dawn & dusk, and deep down to 50 ft. when the sky is bright. 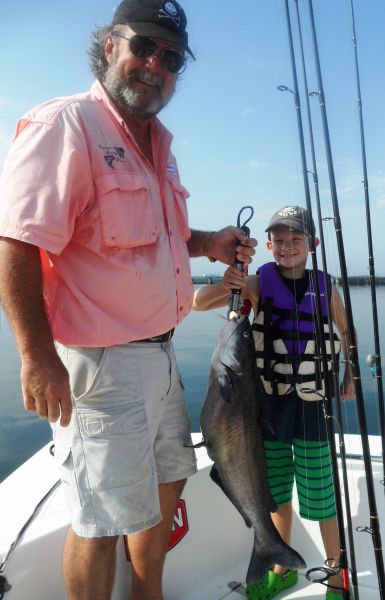 Blue cats have taken up residence in the deep water near the Cowans Ford Dam. On morning trips, my anglers are catching 5-15# blues on live bait(herring, shad, bream, perch, crappie - you name it). We fish them 35-50ft deep on carolina rigs with 4/0-8/0 circle hooks. Fish On! 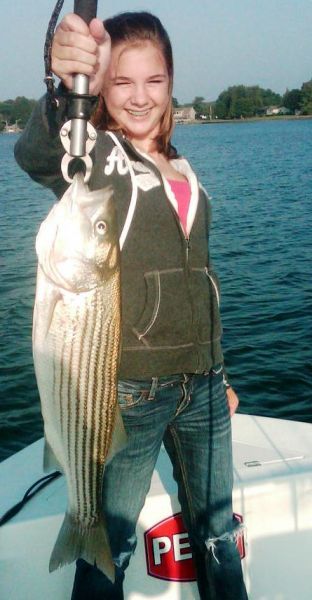 Mid-summer pattern continues. Water temps in hi 80F range, sometimes over 90F. Best bet is jigging white perch in 30-50ft water in coves and flood plains adjacent to the main river channel on the lower end of the lake. 1/2 - 1oz jigging spoons fished with sabiki rigs are very effective, & will catch perch, bass, cats & stripers. Live perch on carolina rigs fished below the perch schools are deadly on flatheads, & catch the occasional striper, spot or largemouth too. Nice largemouth can be taken around deep docks with soft plastics, and spots can be caught trolling or throwing deep running crank baits around humps, shoals, and points. Night fishing with lights near the Cowans Ford Dam for cats, perch & stripers will remain good for several more weeks. 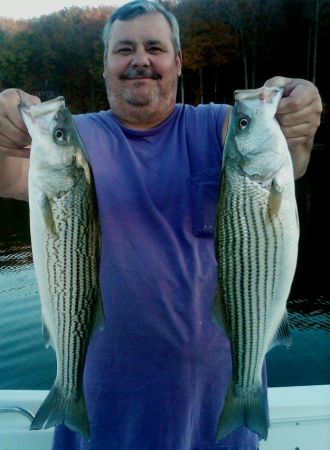 With homage to Mark Twain, reports of the demise of the Norman striper fishery are premature and greatly exaggerated. The overall effects of this summer's striper kill are yet to be fully determined, but the striper bite at the north end of the lake has heated up since the water temps have finally reached the low 60 - high 50F range. The fish are in the main river channel around the islands and underwater humps. They also make forays into the creeks following big schools of shad and herring. My anglers are catching stripers from 35-40 ft deep up to the surface on live alewives and shad. Late afternoon trips have also encountered some brief surface action, and the ususal assortment of topwaters and bucktails produce exciting hookups. The action should only get better through the New Year. 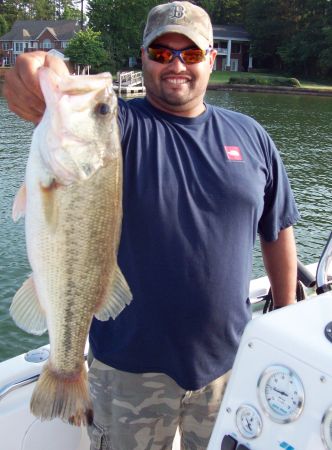 Water temperatures in the upper 80F range has made daytime striper fishing sporadic, but the bass, catfish and white perch fishing continues to be strong. There are good early morning bites along the lower main river channel using an assortment of live baits and shallow running artificials. Fish deeper in these same areas as the day brightens. Major creek channels in the 20-40 ft range are good sources of white perch. When schools of perch or bait are found in the creeks, trophy catfish are often under them. 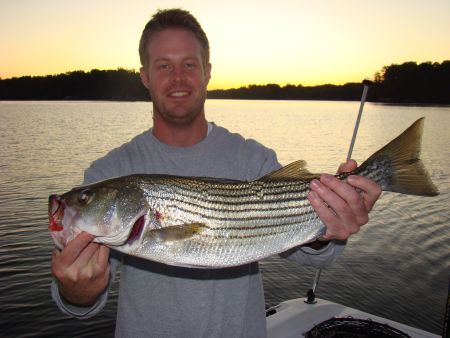 The striper bite is heating up as water temperatures continue to drop into the mid to low 60F range. I'm finding stripers, bass, and catfish from the mouths to midway back in major creeks. They are following the large & many schools of bait back into the creeks. This migration will continue into December as the forage and predators work all the way to the very backs of the creeks. There are also good schools of bass and stripers feeding on schools of bait up lake along the main channel edges around marker 19 to 21. These fish come out of the river section of the upper lake as the water cools in late Sept-early Oct. Live baits fished from the top to 35 ft deep will catch stripers, bass, and catfish. Match your artificial baits to the forage - shad colors in top waters early & late, crank baits, jigs and bucktails. Get out there & catch 'em up! 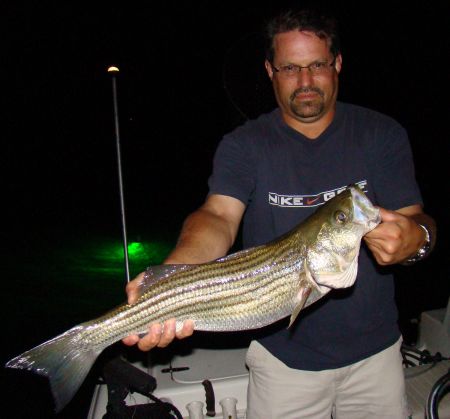 The early morning and night time striper bite should continue to be good into August. The fish are hitting live baits and jigs fished 30-70 ft down in deep water associated with boat harbors, and the river channel near Cowan's Ford Dam. During the middle of the day, stripers can be found in the main river and major creek channels near the south end of the lake. They may be just above the thermacline 35-45 ft deep, or holding near the bottom 60-70 ft deep. 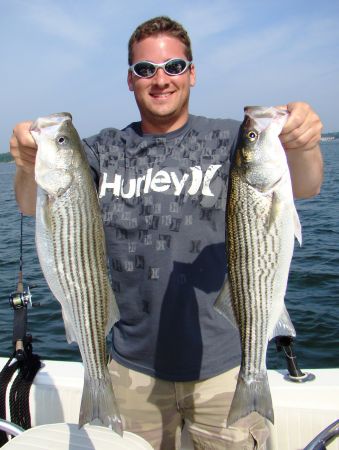 The moderate spring weather plus abundant rainfall has kept the main lake water temperatures lower than recent years. The water temperature is still in the low 80F range at midlake as of June 15. Large numbers of stripers are holding in the mouths of major creeks whereas the bulk of these fish are usually oriented on the main channel S-curves by mid-June. My anglers are catching bass, perch and catfish in 10-30 ft of water around long creek mouth points at daylight, both on artificials and live bait(herring and shad). As the day brightens we are moving out to 50-70 ft of water where live baits fished 30-50 ft deep are taking limits of stripers up to 7 lbs. Many boats choose to pull artificials on lead core line or behind planers to reach these fish. Either way, it's best to get an early start so you can be off of the water before the pleasure boat armada hits the lake. 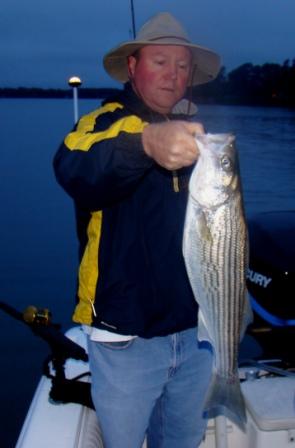 Moderate water temperatures have delayed the main wave of the false striper spawn compared to recent years. Though the stripers we are catching are full of eggs and milt, I think the best is yet to come. The largemouth and spotted bass are also spawning, but again I think the main body of fish are still pre-spawn. I'm finding stripers & bass on main and secondary creek points, shallow early and late, and in 20-30 ft of water during the day. Areas adjacent to or in the creek channels near the backs of major creeks are also prime locations. Most of our fish are being taken on live herring and shad, though artificial crankbaits, bucktails, and jigging spoons have also been effective. I think the spring bite will continue into late May-early June if we don't get much hot weather before then. 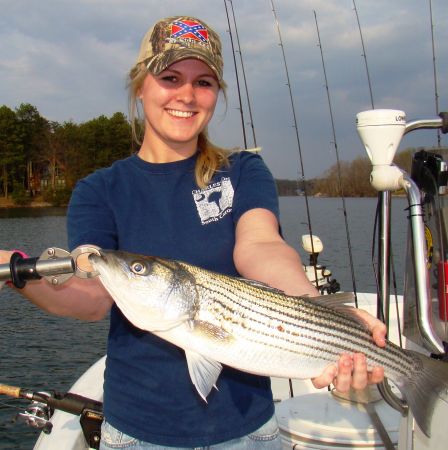 The spring bite is on at Norman! The full moon in April has all of our gamefish species going strong. My anglers have been catching very nice mixed bags of stripers, bass, catfish, crappie, and perch. Water temperatures are in the upper 60F's to low 70F's, and we're catching most of our fish in relatively shallow water. Long points, primary and secondary, towards the back of major creeks are prime spots to look for fish. Depending on the time of day and light conditions, fish your live baits near the surface down to 3o ft deep. Herring, gizzard shad, and bream are most effective.

Native of Gastonia, NC and graduate of NC State University. Residdent of Denver, NC. Owner of Fish On! Guide Service and Ecotech, Inc.