Bear in response to a report titled:  Dare Gamelands

Just found out I got a permit for a bear hunt in December on the dare game lands. Does anyone know if there are a decent, hunt able number of bears on the tract? Not looking for specifics, just wondering if 10 years of applying was worth the wait.

Well, I just found out today I got a permit to hunt the Dare Gamelands for Bear in Dec. I've been trying for over 10 years. I'm not looking for any specifics, but has anyone been out there and seen any bears?

I can't figure it out, are we able to bow hunt on Sundays this year? I can't seem to get a clear answer anywhere.

Just wondering if anyone has heard any gobbling yet. Usually I hear them by now... the woods seem pretty quiet.

So, what's the deal??? Can we bow hunt on Sundays or not??? I don't see the change in the regs. Did it get pulled at the last minute???

Anyone know the answer???

So, what's the deal??? Can we bow hunt on Sundays or not??? I don't see the change in the regs. Did it get pulled at the last minute???

Anyone know the answer???

Since I just saw the post discussing the difficulty with the outfitter in SC. I thought I would give my two cents on an outfitter who does an awesome job. Mike Noles at conman's outfitting is a top notch operation. You can see their website at: conmans.homestead.com/ You won't find a better group of guys who will work harder to give you an A+ hunt.

I'm looking for a duck guide on the coast. Anyone have any suggestions? 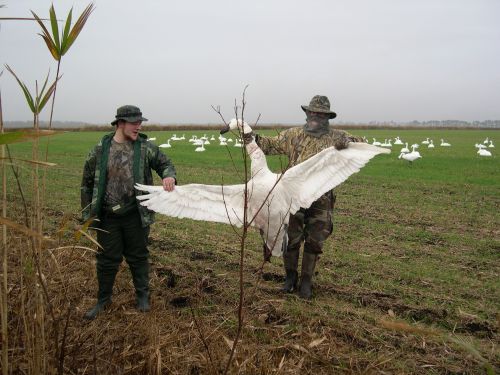 Big birds here in NC. Awesome that we have a chance to hunt them. Great hunt over in Washington county. 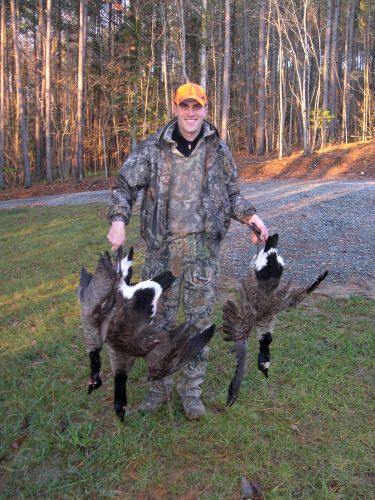 My Brother-in-law killed a few geese this weekend out at jordan. We didn't see much. Just a few high flying widgon and a couple of mallards. These geese just happened in range at the end of our hunt.

Anyone heard of any birds at jordan or harris?

Anyone have any advice for a game land to hunt swan? I am very familar with the game lands in the triangle area, but I know very little about eastern areas. Any info would be helpful.

I'm still hunting. I know most guys use hounds, almost have to. But I don't have access to a pack. Anyway, thanks for the advice. I'm hoping there are enough logging roads or paths that I could hunt off of. I'll head down there to scout the week before or so.

I'll be anxious to see if he is right. I haven't seen any chasing yet on the places I hunt. Usually the first week of Nov the woods are crazy. I've seen deer, just no chasing yet. I'm in Chatham County.

I could be wrong, but I though baiting was illegal in Va. You might want to delete the posting... Awesome deer though! http://www.dgif.virginia.gov/news/release.asp?id=240

September 04, 2010 at 8:13am
A comment titled: Lone Wolf in response to a report titled: Climbing Stand

Lone Wolf is the best stand I've ever used. Quiet, light, and very easy to set up. A bit pricey but well worth it.


September 03, 2010 at 6:13pm
A comment titled: Sunday hunting in response to a report titled: Hunting on Sunday

Bassmaster, I won't say anything more. I believe you have proven the point.

June 18, 2010 at 12:14pm
A comment titled: Respond to Sunday hunting in response to a report titled: Hunting on Sunday

I don't normally like to get into discussions about the theology of the Sabbath. I can't stand it anymore though. First rule of Bible interpretation is context is king. To 'remember the Sabbath and keep it holy' is one of the ten commandments. This is found in the Old Testament under the old covenant. All of the other commandments are reiterated in the New Testament and therefore apply to the church. Not one place in the New Testament church is the 'Sabbath' stated as something to be followed. Also, the Jews followed the Sabbath under the Old Covenant on Saturday, not Sunday. The church didn't start meeting on Sunday (resurrection day) until the book of Acts. The theme of 'rest' carries through scripture and is a principal I believe we should follow. However, nowhere under the doctrines of the new testament church is one day to be considered holy as opposed to another one. If you tell someone that the 'Christian' thing to do is to rest on the Sabbath, the day would be Saturday, and then you would also have to follow the rest of the rules of the Old Covenant. You couldn't eat pork, shrimp, and you would have to have a priest offer sacrifices for your sins. Hebrews 7:12 clearly states that under the new priest (Jesus) old has passed away under the new priest we have a new law. Many of the Old Testament laws still apply, but clearly not all of them do.

Preach the Gospel! The Bible defines my doctrine. Not tradition. The Sunday ban on hunting is a product of bad theology in the past. The New Testament church is under the New Covenant of Grace not the Law of Moses. If you don't want to hunt on Sunday because your conscience won't let you...fine. But, it is not a Biblical mandate.

I believe if you are a Christian, it is a mandate that you be part of a church. This isn't a cop out for going to church on Sunday. It is simply the fact that we cannot use bad theology to push an agenda.

Gander Mountain is tough to beat. Greensboro off 40

January 31, 2010 at 2:40pm
A comment titled: Maybe Jordan? in response to a report titled: sandhills gameland

I know nothing about the Sandhills, but I do hunt Jordan and the deer are clearly beginning to rut. I've been seeing quite a few rubs and scrapes. Also, the acorns are falling like rain.

Just do your homework and the game lands will work fine. We have a lease and hunt game lands. I kill just as many deer on the game lands as I do the lease. I killed one last night out at Jordan Lake. Get out there now! They were chasing does all over the oak ridges last night.

Can't beat Jordan Lake. Lace up your boots and go for a hike to get away from the crowds. I take several deer a year out there. I have never hunted Falls, but I hear guys kill a pile of deer out there.

David Hofert has not filled this section yet.