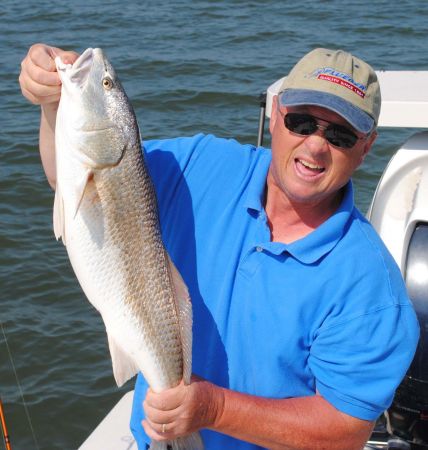 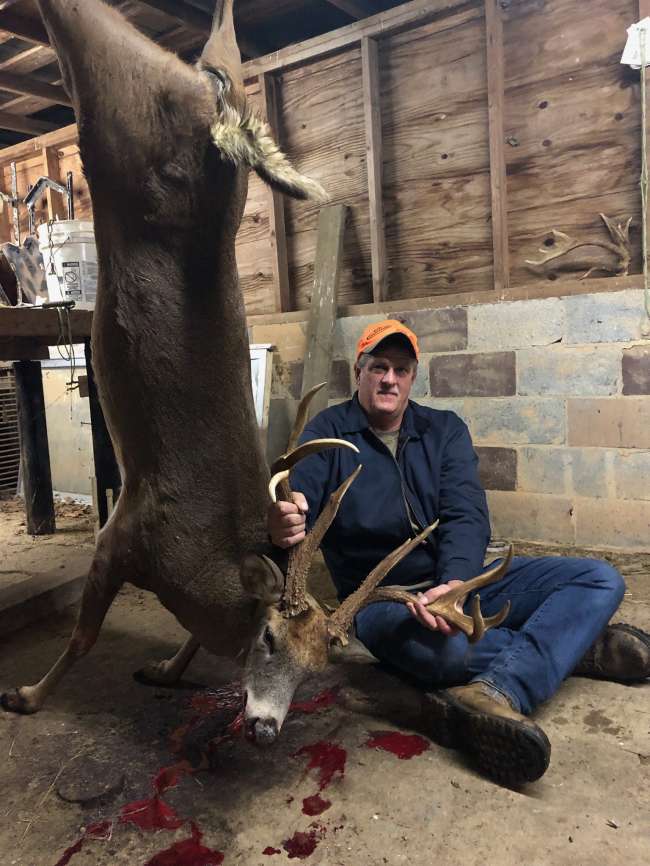 I had been getting pictures the last 2 seasons, he would always be there right before i got there in the morning or 30 mins after i left in the afternoons. the live pictures was 20 mins before i go to my stand and then 2 hours later he walked back by it checking for a doe it was taken on 11-18-18. Buck was killed in Caswell County by Larry Pruitt. 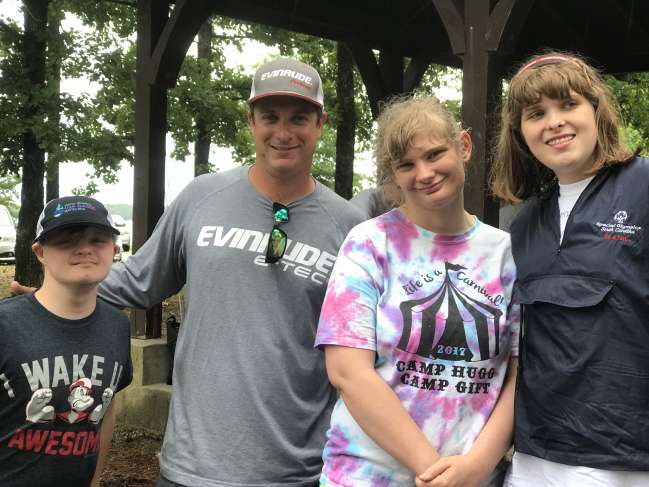 He spoke at the awards presentation about the importance of getting kids involved in fishing and assisted with awards, presenting plaques to each of the 20 participants and their boat captains.

CAST is a national, non-profit organization with bass pro Jay Yelas as national director. It has been sponsoring fishing events across the nation for 27 years. The Lake Murray event was a joint effort between Lake Murray's Seniors Bass Club and Mt. Horeb Methodist Church's Special Needs Ministry. Twenty special needs kids and a parent were paired with members of the club, with each kid receiving a spinning rod and reel, tackle box and T-shirt for an 8:30-11:30 a.m. fishing event, followed by a barbecue lunch provided by club member Jim Edwards and his family. 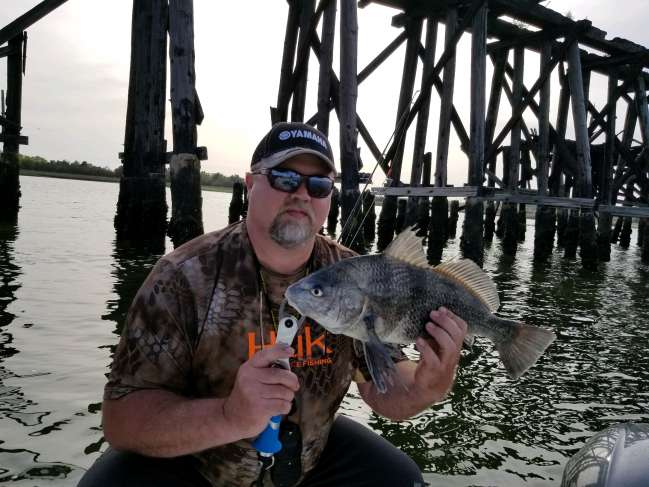 April 1 was a big day on the water for Tina and Randy Thomason. Tina caught her first redfish, a nice bull at that, near the South Jetty at Charleston Harbor, on cut mullet fished on a sliding sinker red. Randy caught a nice black drum on a piece of oyster fished on a Carolina rig near Drum Island. 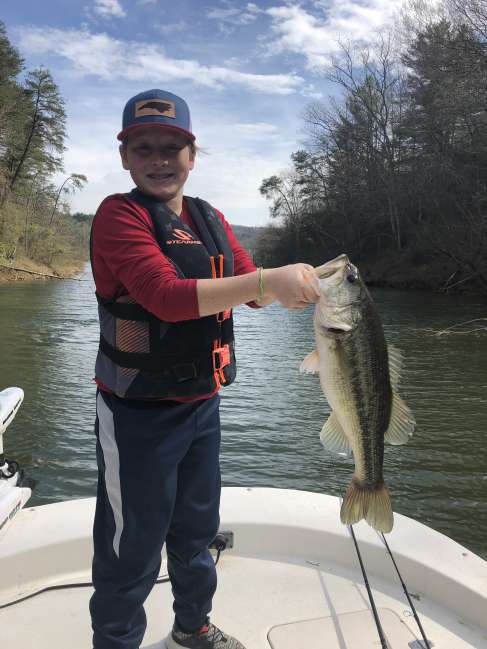 Ty and Wyatt Little both caught their biggest bass ever on Friday, April 6, fishing on W. Kerr Scott Reservoir in Wilkes County. Ty Little's bass was 22 1/4 inches long and weighted 6.89 pounds. Wyatt Little's bass was 22 1/4 inches long and weighed 6.75 pounds. Fishing with Kris Little, the five biggest bass of the day weighed 24 pounds. Ty (at top) is 13 years old; Wyatt (above) is 9. 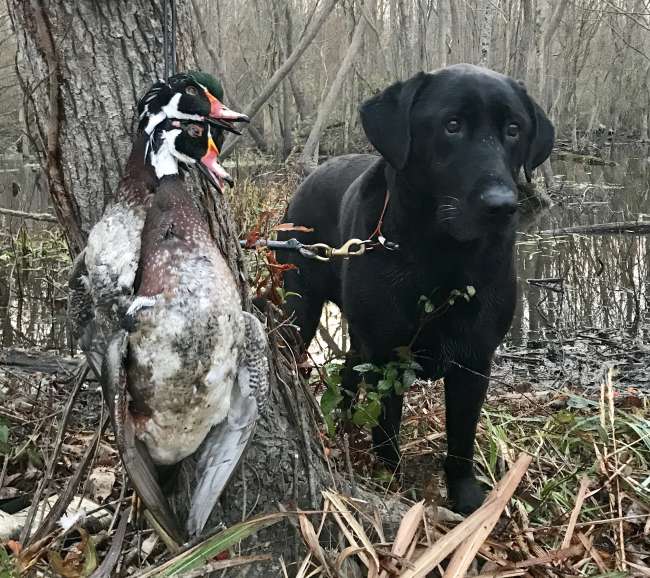 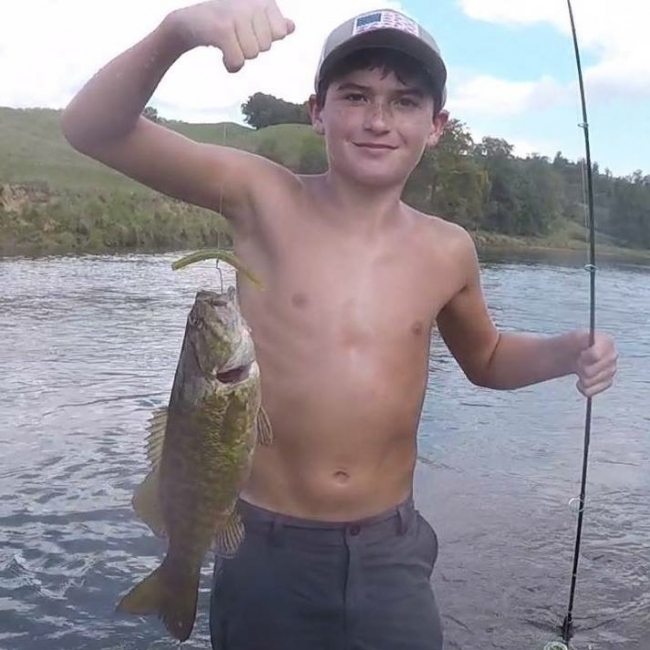 James Poe caught this nice smallmouth bass on Sept. 16 on the New River near the North Carolina/Virginia border. 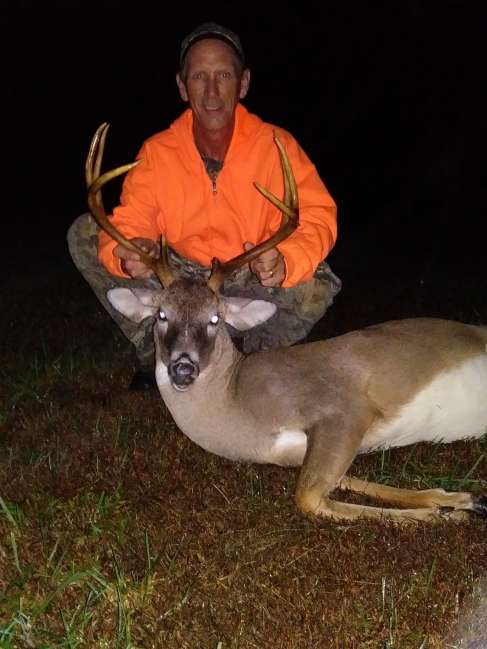 Jeff Wiebe of Efland, N.C., killed this nice 8-point buck in Orange County. He was watching a doe whose flank had an obvious wound, and who was missing an eye, when the buck showed up just before dark. He kille dit with a single shot from his .50 Thompson Center Arms blackpowder gun. 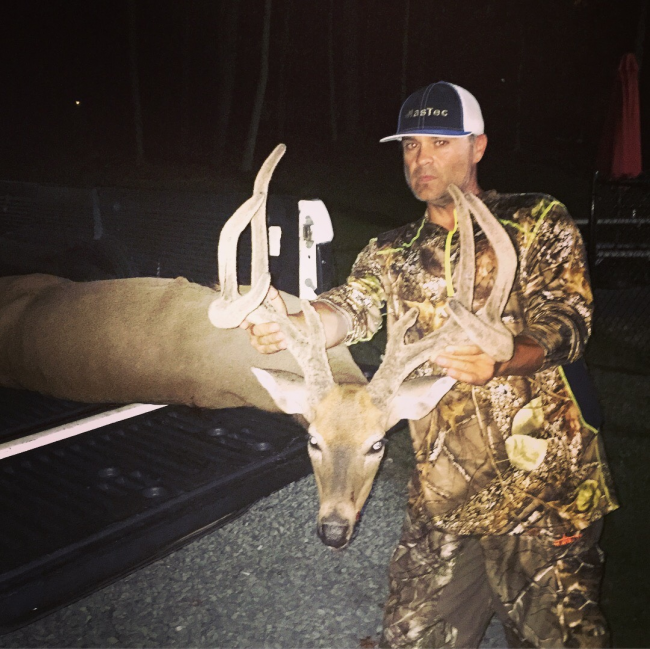 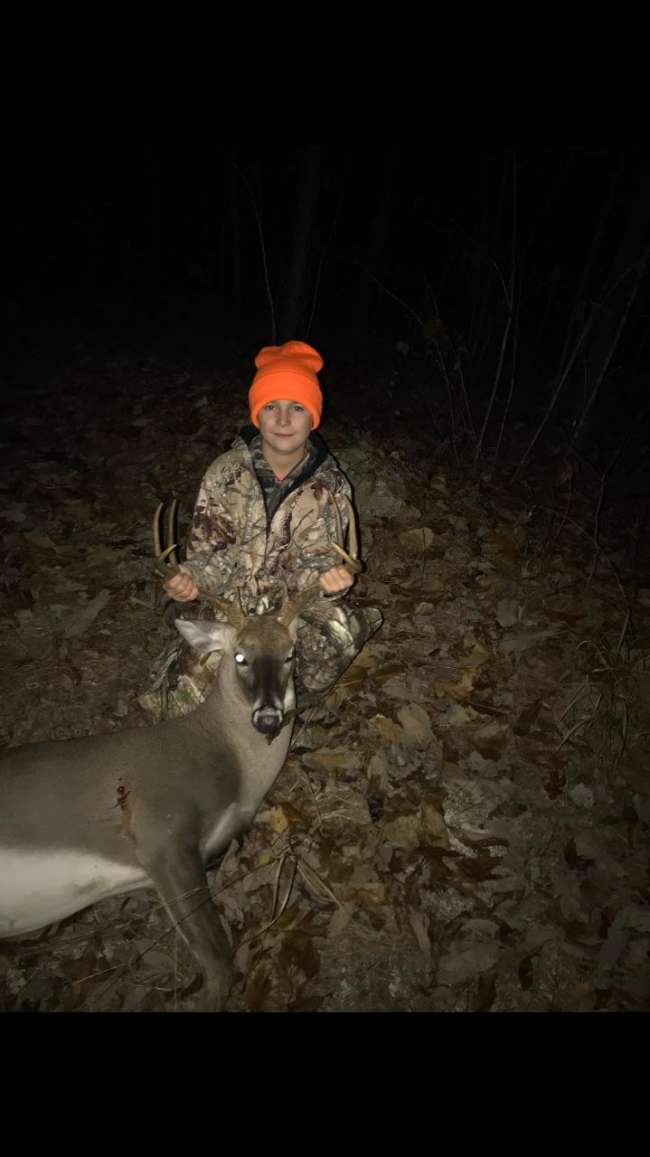 Cody Dean Leonard, 12, who lives in Davidson County, N.C., killed this 8-point buck in Montgomery County with his .243. 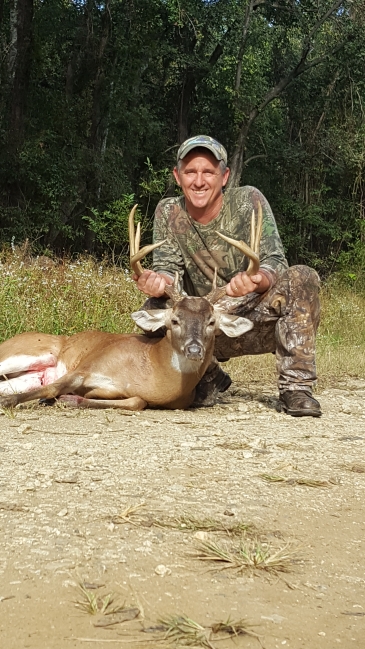 Great job by the Mullis family of Summerville, S.C.
Dad Keith Mullis took this, 8-point, 180-pound buck on Oct. 15, hunting in the Wee Tee State Forest. He took the buck with a shot from his .30-06 while still hunting. 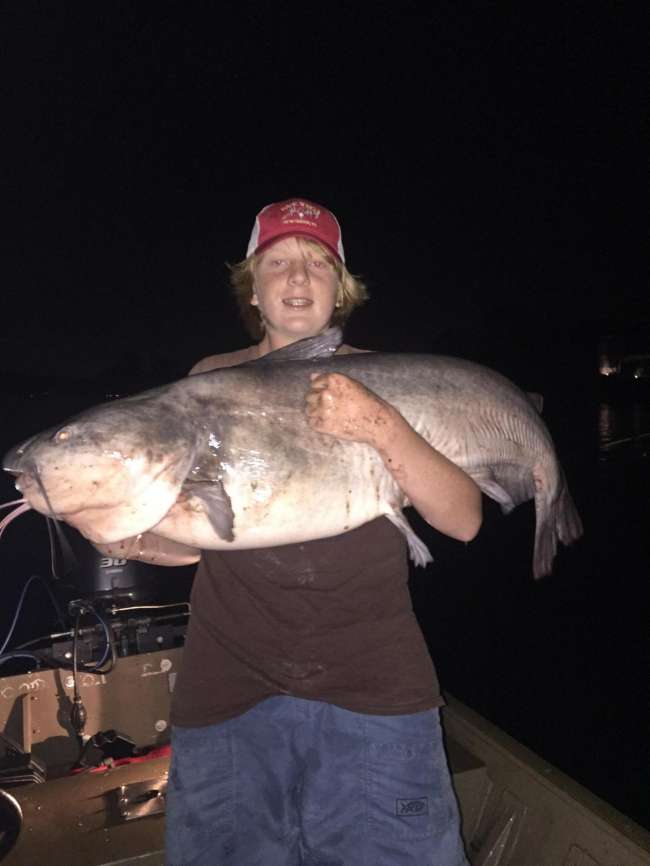 It's hard to believe anybody, much less a 13-year-old, can have as good a month hunting and fishing as Whit Strickland. First, he caught a 70-pound blue catfish at Lake Wylie the first week of October.

November 06, 2017 at 9:26am
Beaufort County spits out trophy buck for huntress 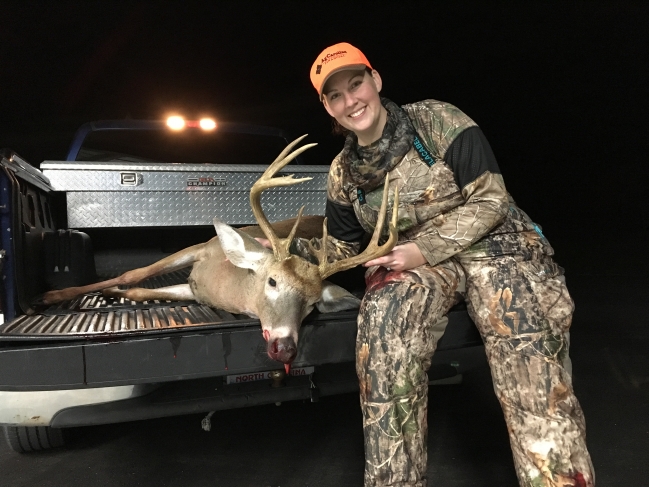 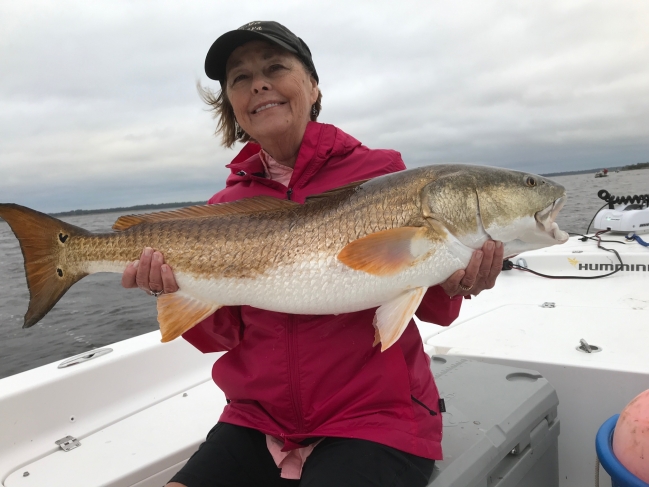 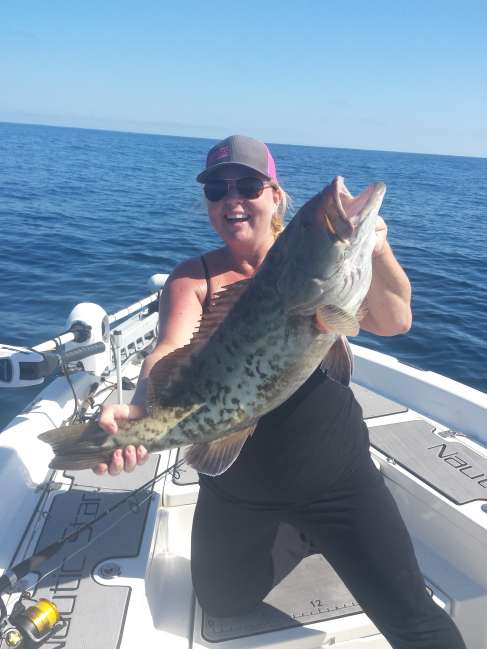 Brandy Edwards of Surf City, N.C., caught her first-ever gag grouper, this 12.8-pound whopper, on Oct. 15, fishing out of Topsail Inlet with her husband, Scott. Fishing out of a 21-foot NauticStar bay boat, they followed a bigger boat out to about 12 miles off the beach, found a nice piece of hardbottom and hooked up. 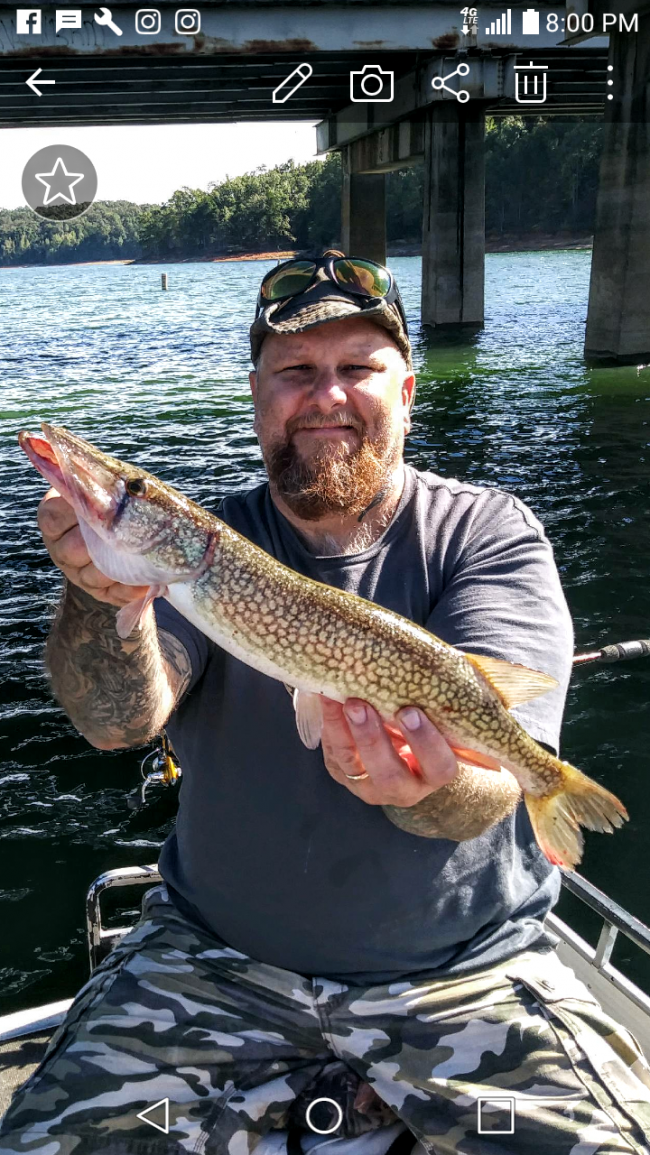 Bryan Buckner of Saluda was surprised to reel in this chain pickerel on his catfish rig baited with cut perch Monday Oct. 16 under the Hwy 26 bridge on Lake Hartwell. He also caught a nice mess of crappie fishing with 'Six Rods Down' guide service. 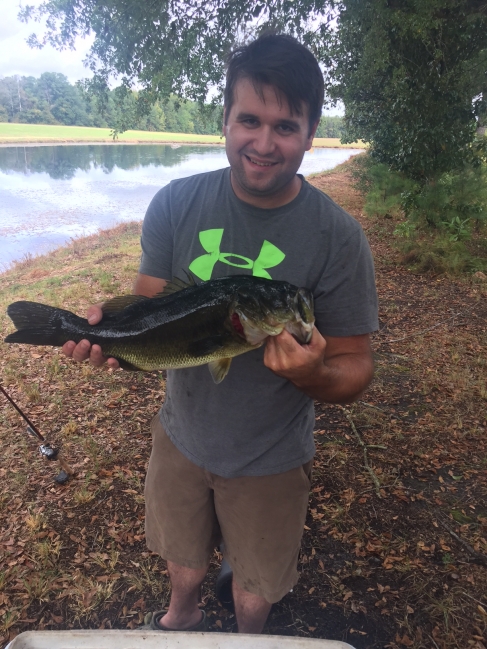 Casey Miles caught this 4.5-pound bass in a pond near Lugoff, S.C. 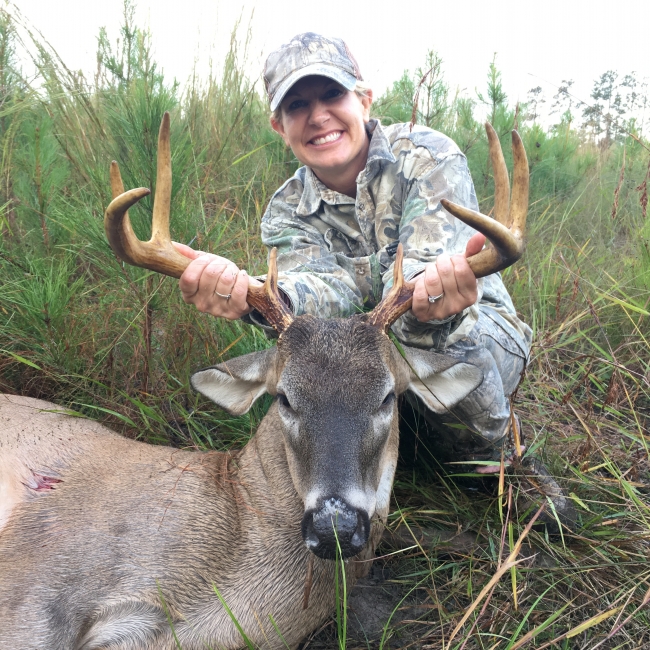 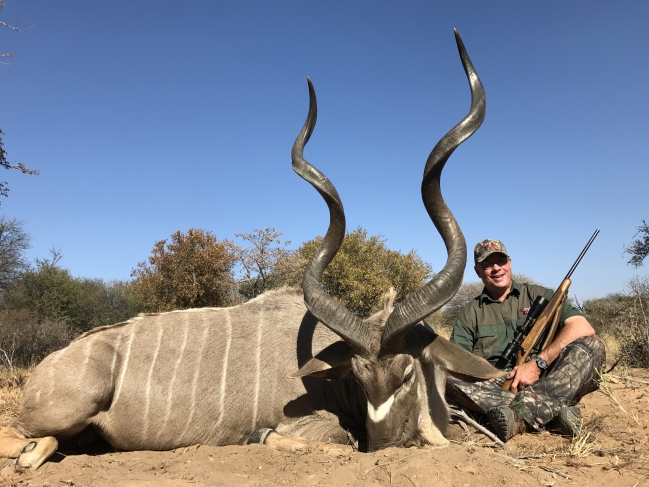 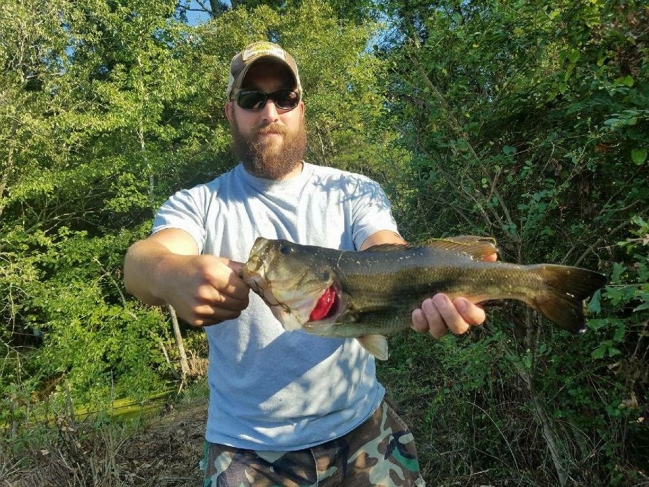 Greg Abee of Greenville, S.C., a disc jockey on 93.3 The Planet known as Diesel, caught this nice largemouth bass while fishing in a farm pond near Mauldin on Labor Day. 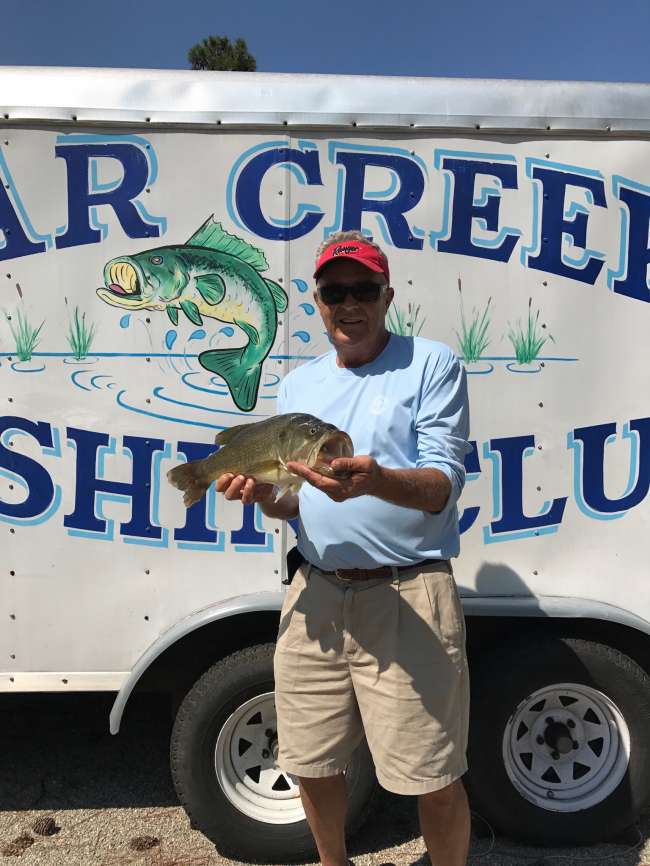 What a great buck.

Congratulations man. Looks like a real nice one. Proves once again that being patient is always good for a hunter.

N.C. Wildlife Resources Commission will have quite a few dove fields planted for the public. Go to www.ncwildlife.org for details. We are profiling hunts on the Suggs Mill Pond Game Lands in the September issue of the magazine, which will be on newsstands in about 2 1/2 weeks. Suggs Mill Pond dove hunts are permit only the first two weeks, but they're open to the public the last two weeks of September. Plenty of other dove fields plannted by the state are available.

I would advise you to go by The Rod & Reel Shop in Supply, just across the causeway, and get advice from Hunter McCray.

We are about to get into the best surf-fishing of the year, when the water temperature cools off enough that reds and trout and flounder start piling out of the inlets and set up shop in the surf for several weeks. For reds, you're going to want to use a fish-finder rig and the freshest cut bait you can find.

Pretty sure it opens on Labor Day, which is Monday, Sept. 2.

July 03, 2013 at 1:24pm
A comment titled: A bit overblown in response to a report titled: Harvest Report

Across the Southeast, EHD outbreaks occur about every four or five years, like clockwork, and it's not drought conditions that bring it on; just the opposite. It is much more likely to develop in hot, wet summers, which help reproduction of the tiny midges that spread the disease.

These horrible outbreaks like this fall's in the northwestern corner of the state are generally limited to more local areas -- not statewide. Typically, an ehd outbreak that's widespread across North Carolina will take about 15 percent of the herd. This outbreak, a particular virulent strain of the disease, has been estimated to take 50-70 percent of the deer in the locally affected areas. It's the worst outbreak in 20 years and is not likely to happen again for another 20.

Generally, deer who are not affected in the exposed areas develop a resistance to the disease that is passed on to their next set of fawns, so you generally don't get an ehd outbreak in an area more than every 4-5 years, even if the disease is present, because the deer are basically innoculated against it.

There's no reason to suspect that deer in other parts of North Carolina are likely to experience a similar outbreak anytime in the future, so there's no need to discuss full-scale management changes. The NC herd has survived ehd outbreaks before, and the NW herd should rebound in 4-5 years of normal reproduction.

Back in the dark ages, before does were legal, it was estimated that a herd could double its size in 3 years, because only 10-12 percent of the herd would be taken by legal hunting and 15 percent would die of natural mortality. If hunters voluntarily pass up does in NWNC this year, that will speed the recovery a bit, just like closing down the fishery on speckled trout two years ago after the massive cold-stun kills has helped that fishery recover, apparently ahead of schedule.

In order to thin out a herd that's overpopulating an area, you need to take out better than 30 percent of the herd annually. So a 50-50 buck/doe harvest of 30 percent of the herd will stabilize the herd's size, and a larger harvest tilted toward does will reduce the size of the herd. If you're in an area with herd density of 25 deer per square mile, you need to take a dozen out a year per square mile.

I'm with Teach. I've always thought two people could comfortably hunt about 80 acres. If you can pick up a piece that size and have someone manage for you a few years until you get there, I think you'll be fine. Just make sure the posted signs are out.

January 25, 2011 at 3:03pm
A comment titled: Capt. Rick Hiott in response to a report titled: Pictures from this past season here in Charleston,SC

Great to hear from you Capt. Rick. Did you work on 'em this year on the Grillage?

The characteristics that piebalds show are recessive genetic traits, but they'll continue to show up in a local deer herd every year or two. When tagging and checking deer in was required, certain check stations would see a piebald or two every year.

I'm going to take a stab at this one. There's a very good chance you heard a turkey. Nothing sounds like a person walking through the woods any more than does a turkey, especially a gobbler. The footfalls sound exactly like a man's and the stop-and-start nature of what you describe fits in, as does it running off. I've been amazed at how loud a big gobbler sounds as he's running away from me in April.

If the deer had actually been in the pond, I would have a real good guess: ehd... epizootic hemmorhagic disease, also known as blue tongue. It's been a couple of years since we had an outbreak. It's carried by midges, and it's more apt to show up in the fall when we have a warm, wet summer. The deer gets infected and runs a fever, so many of them go to water to cool off and die there. Finding a dead deer in the water is usually ehd. But haven't heard of any other cases, although September/October is usually when it shows up. Once it cools off, the insects die and quit carrying the disease.

Genetics don't have anything to do with that buck's horns if he's injured. Injury to right side of body has showed up the next year on left antler. Good chance he'll have non-typical rack the rest of his days. I'd take him given the chance, but he could get bigger and throw off an even stranger rack next year.

That's 150 inches of antler, easy. South Carolina Sportsman.com will have a story in the next day or two of a 156-inch buck killed Labor Day.

that's a lot of inches of anther. If he gained 10 percent over the summer, he's closing in on something outrageous

What was the live bait: bream, crappie, shad or goldfish?

Timber rattler... looks like about a 3-footer. One of the drawbacks to August deer hunting.

I am managing editor of North Carolina Sportsman and South Carolina Sportsman magazines. My wife, Barb, is a kindergarten teacher. I have a 30-year-old daughter, Amy, who produces the 11 p.m. news on WNCN-TV, NBC-17, in Raleigh (who is mother of my 2-year-old granddaughter, Grace Ann); a 27-year-old daughter, Carrie, who swam for Gardner-Webb University as an undergraduate and is a physical therapist; a 24-year-old daughter, Katie Grace, who graduated from Gardner-Webb and is an elementary school teacher; and a 23-year-old son, Andrew, who graduated from Appalachian State University and is a construction supervisor/foreman. He has a black Lab puppy, Buckshot, who is his pride and joy.

I worked for the Winston-Salem Journal for 22 years as outdoor editor before joining the Sportsman staff in March 2007. I am an avid cyclist; over the past 5 years, I have ridden more than 13,000 miles.