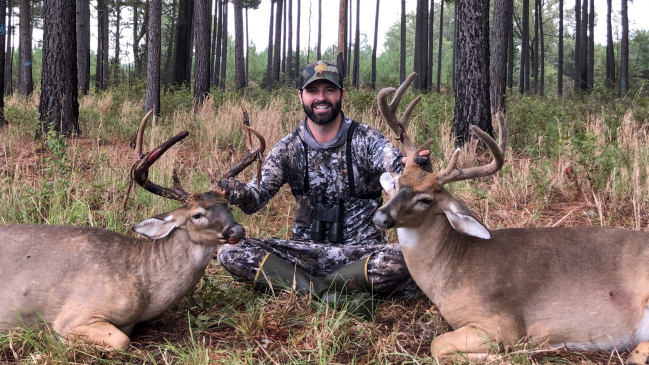 The afternoon of Tuesday August 27th I planned to hunt a peanut field based on summer scouting and previous buck sightings. Two does and a yearling buck stepped out and fed awhile before retreating back in the woods relatively quickly. I decided to leave my stand slightly early to glass the adjacent field. Sure enough, 15-20 deer were feeding. Too dark to accurately identify them, I was convinced there were at least 6-8 bucks in a large bachelor group.

With a toddler and a two-week-old newborn at home, my last sit of this quick velvet hunt needed to count. August mornings are often slow in the whitetail woods but if you can catch them traveling back to bed after feeding all night you may have an opportunity. Something I knew but had never pulled off with success.

Based on the location of the feeding deer, I felt confident how they entered the field and where they were likely bedding. Simply based on a process of elimination.

The following morning, August 28th, I decided to climb in a mature loblolly block right outside a dense young pine thicket. My idea and hope was to catch the bachelor group heading back to bed down. The pines are roughly 23 years old and have been on a control burn cycle once every three years. This allows deer to feel safe within the natural browse height but can still be visible from 25 feet up a loblolly.

At first light a young doe and fawn began to browse their way past me when movement caught my eye upwind of my tree. A tanker of a whitetail in full velvet at 150 yards was slipping through the timber at a good pace. Within 15-20 seconds he presented a safe window to shoot so I pulled the trigger. What transpired afterwards was nothing I had ever witnessed in the woods. Gradually, a bachelor group of 13 would pass through the pine forest advancing towards the dense bedding cover.

Immediately after my shot, with an adrenaline rush and heart pumping overtime, several more appeared. Then a fifth, sixth and seventh buck emerged. They were slowly traveling the same route as the first deer. The new bucks appeared to be 1.5 - 2.5 years except one with velvet hanging from a wide frame larger than the first buck. When that mature whitetail stepped in an opening, I took the shot at 140yds.

To this point, I had witnessed bachelor groups before but never to this size. Even after the second shot rang through the timber, six additional bucks, including two more mature, would eventually cruise down the same travel route within a ten minute window of the first.

I waited an hour after the last buck was out of sight before I inched my climber down the pine. Shockingly, none of the bucks left the area spooked. At least, not to my knowledge based on tail movement, body language and their slow moving pace.

BuckBuckMoose
I never seen anything quite like this- pretty damn impressive. Feel like I was reading a Adam Greentree story. Congratulations man.
Reply

BuckBuckMoose
Was you in NC or SC?
Reply