A mahi day you could only dream about! 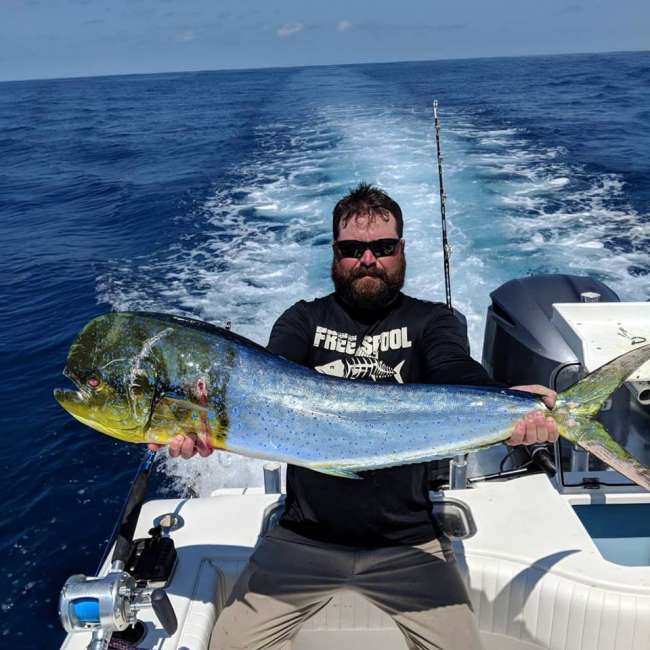 Two weeks ago, I went fishing with my brother, and some friends who run Salt Fever Guide Service out of Ocean Isle Beach. SFGS has 3 Freeman 37VH's that are incredible machines! We went bottom fishing on Wednesday and had pretty good luck. Stumbled across a new grouper hole which we were able to pull two keeper Scamps out of (2 under slot, and an under slot Gag went back home) and a good amount of vermilion, pink snapper, sea bass, and some grunts (neighbor loves them so we keep em). On the way home, big bro asks if we want to pull an overnighter b/c the water flattened out. Everyone agreed so we made it home, fueled up, grabbed a few more sammies from Publix and took off for the gulf stream. Ended up crashing in about 100' of water not far from the stream for the night. Didn't manage to hook into much at night, which was a little disappointing. We took shifts sleeping and watching the water (4 people on 2 shifts). Unbeknownst to me the two people awake at daylight, pulled the anchor, set up our trolling rods and hooked on our first mahi at 5:30am (skirted ballyhoo). Shortly after, an 84.15lb wahoo (skirted ballyhoo). Shortly after, an unknown but keeper size tuna (skirted ballyhoo). Our partner boat which comprised of folks who did not want to sleep in a bean bag 60 miles offshore met up with us around 9-10am near the Scarp. We managed to catch about 7 dolphin up until we crossed paths with a floating pallet which resulted in 6 rods knocked down on a boat with only 4 people. After the two boats trolled that a few times, our boat ran out of ballyhoo and decided to jig squid up near the pallet. It was crazy to see how many mahi were underneath the boat. It was like looking into a fish tank full of fish. After the two boats got home, the 11 people lucky enough to have a day that may never come again, began cleaning the 87 dolphin, 2 wahoo, and 1 tuna we managed to land on deck, while the mates cleaned the boats. We didn't finish cleaning fish until the next day. It was such an incredible trip.

No high speeds were used. In fact, we fished the FOSO a few days later and the high speeds didn't produce anything. Only thing we found successful was skirted ballyhoo. Nothing wanted our daisy chains, green machines, etc. We did manage to see two neighboring boats hook on a couple blue marlins, which was the highlight of our tourney day. Manged to bring home more freezer fish but nothing worth weighing.

Headed back out to OIB for Memorial day with hopes to find more mahi and wahoo. Will report when I get home.

New to this forum, and look forward to getting to know some of you!

OIBNapaSnob
That's one Hell of a day !!
Great to see haul like that.

I have my first charter with Salt Fever on October 5th. your post make me happy I picked the right boat.
Reply