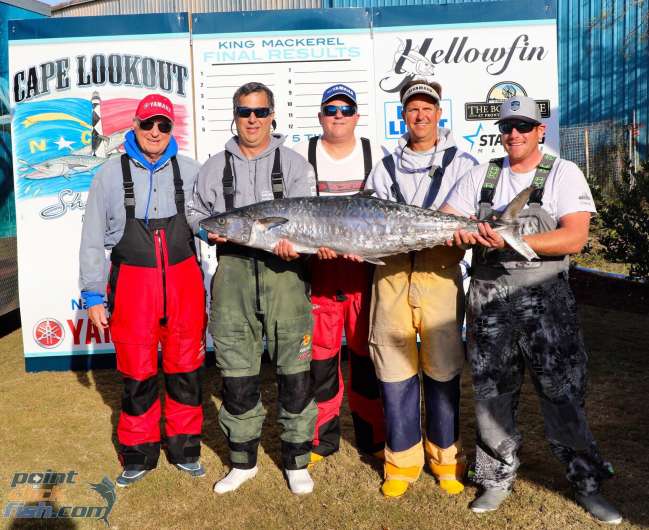 Had a great day fishing the championship for the Yellowfin Cape Lookout Shootout presented by Nationwide and Yamaha king mackerel tournament on Saturday November 18th. Started the week off thinking we would be running to Hatteras to fish, but after checking temperature charts and talking with a charter captain in Hatteras we determined the big fish were not there so time to regroup. With all the north wind and cold temperatures we decided off the beach in deeper more stable water was the place to be. Heard of some fish at the East Rock so after checking out at 6:00 on Saturday morning we rolled it to the East Rock. The water was not warm, but the bite was!! Caught a low 20's fish at about 8:00. The other boats that were around were catching some fish and the word started to get out to the other competitors so other boats were coming. We worked around the edges of the crowd and about 8:30 the long lined blue fish took off. After about 20 minutes or so we were able to gaff the fish and put it on deck! We knew it was a good one, but during November there are lots of good ones so we kept fishing until 1:30. Decided it was time to go weigh as the scales opened at 2:00. When they finally settled at 51.24 pounds we all let out a huge cheer! The biggest king we had ever weighed and ended up the tournament winner!!! What a great way to end the season with winning the Championship. Thanks to a great team of Ron Dorsey Sr., Jon Dorsey, Matt Gravitt and Trey Grady for making a plan come together and letting me run the boat!