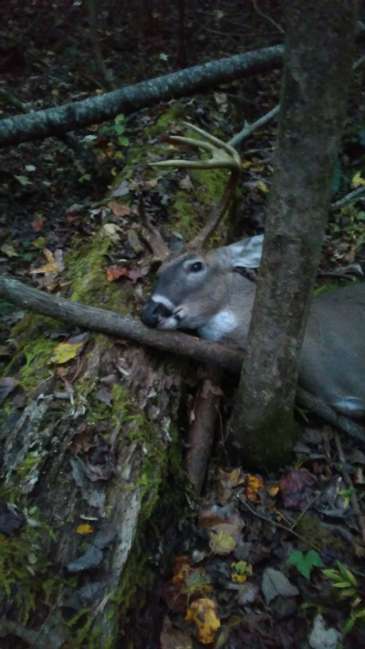 Oh man, It's been so long since I've even seen a mature buck on my property I almost forgot what they look like! I thought this year was going to be the same but on Saturday, November 4th, I decided to move my blind to the creek boundary of my 5 acre property adjacent to the State park that doesn't allow hunting. The goal was to be able to see them on the park side and call them back to my side with scent and sound. On Saturday around 5:15 P.M. I was just able to make out a deer running fast in the woods across the creek bottom and so my attention was away from my land and I was getting my call and rattling horns ready when i hear commotion behind me! I turn slowly around getting my muzzleloader ready but i must have made noise because a couple does had me pegged. I just kept moving slowly until i could see all the deer. One was this buck and I couldn't tell anything about his horns but he was obviously big so I shouldered the gun and the does took off. The buck just had to stop and look one last time and i let him have it. It was a perfect shot and he didn't even get far enough to run off my land.
I took him to Foxfire taxidermy the next day and Aaron said, after looking at his teeth, he was probably 4 years old. He certainly was big enough in the body but didn't have much in the way of antlers. I'm not fussed about it though cause any mature buck is a trophy and he will give us lots of venison after he chills out in the cooler for a week or so.
Reply