A bird I didn't deserve 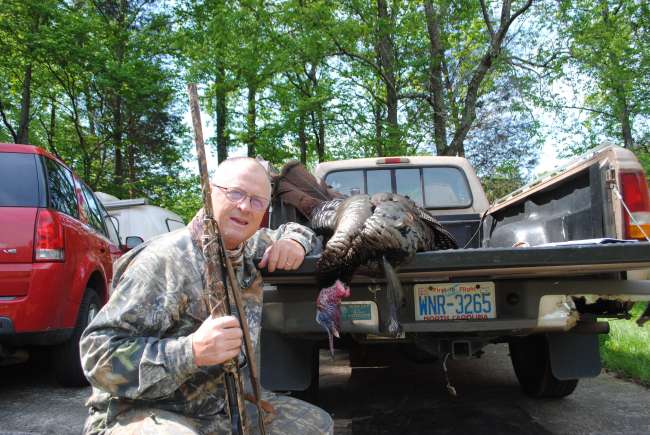 I'm a firm believer that if you put in enough time in the turkey woods, even though you'll go home most of the time scratching your head or muttering under your breath about the one that got away, every once in a while, you'll kill a bird you didn't deserve to kill.

I killed my fourth undeserved gobbler this morning (April 27) in Yadkin County. It was the heaviest I've ever killed, 22 pounds even, with spurs just a shade longer than an inch, sharp and beginning to curve, and a 10 1/2-inch beard. A nice 3-year-old bird.

He was dead 13 minutes after I got out of my truck.

My son and I have been hunting 250 acres of land belonging to a friend, but it's cut up in a lot of 20s and 40s and 60s -- interspersed with land he doesn't own. I deserved to kill a bird on opening morning that I had coming twice; both times hens intervened. The bird has since disappeared. I got on a second bird that was just off one end of the chunk of land I was hunting; he roosted just about the same place every morning, but I could never get him coming in my direction; too many hens, and one morning, some dogs barking on the next piece of property must have scared him off. I sent my son to another chunk of land last Saturday, about 20 acres that's a quarter-mile away as the crow flies but several miles by car. He found a little fallow field of about 10 acres that had all kinds of turkey droppings and scratching around it, and he had two hens visit his decoys.

This morning was the first chance I've had to hunt this week, and it almost didn't come off. My wife is leaving town on business, and I had to drive her across town first thing in the morning to meet her ride. I figured, well, nothing ventured, nothing gained, why not drop her off and head out, take a couple of decoys, blind in and watch that field for an hour-and-a-half or so, to see what's cooking. I dropped her off at 7:30, was back at my house at 7:45, switched vehicles and headed to the woods. I pulled into an old woods road, stopped about 50 yards short of the field, opened the door, started to switch out my tennis shoes for boots, and I thought I heard a gobbler a ways off to the east. I got my boots on pretty quickly, put on my vest, hung my portable blind and seat around my neck, loaded the Tri-Star Viper Max shotgun that I'm giving a test drive for the manufacturer, and took a few steps. I thought, 'be careful,' so I stopped, reached into my vest and pulled out a Primos True Double mouth call. I figured the turkey I thought I'd heard gobble had to be 250 or 300 yards to the east, but it's a big field, and who knows how far he might be able to see me. Then, a couple of geese flew over the field, honking, and a second bird gobbled, to my northwest, close, so close I could hear the rattling noise in his throat. I clucked three times, and he gobbled again. I clucked twice more and shut up. I dropped to one knee, dropped the decoys, got the gun up, clicked off the safety and waited. About a minute or so later, I could see his big, white head coming up the edge of the field to my right -- I'm still 25 yards from where the road meets the field, so I was watching him through the trees. He stopped right on the edge of the opening, busted out in a strut and did a little circle. About that time, two deer broke from the woods to my left -- they were directly downwind of me -- but he never paid them any mind as they went past him no more than 15 yards away.

He came out of the strut, craned his neck and started looking for the hen. I figured, he's a little out of range, please come in. Why he did, I'll never know, but he took four or five steps in my direction. Now, he's facing the middle of the road I'm kneeling in, sticking his head up as high as possible, looking for the hen. I figured, it's still a long shot, but I'm not going to get another one; he's going to see me kneeling down, out in the open, in the right-hand track of the logging road. I patterned this gun before the season. It shoots Winchester LR 3 1/2 inch No. 4 shells about two inches high and two inches left at 40 yards, so I put the bead just to the right of his wattles and squeezed the trigger.

He went down, jelly-headed. He never wiggled. I trotted to him and found him graveyard dead -- one of only two or three birds whose necks I didn't have to step on to finish him.

I looked at my watch: 8:18 a.m. I'd cut the truck's engine, knocked it out of gear and put on the emergency brake at 8:05. No way I deserve to kill a bird 13 minutes after i stop the truck, with me only 20 yards from the truck. But that was payback. I figure for every half-dozen or so gobblers that I deserve to kill, but for one reason or other I don't, one will come up to me and commit suicide like this one did. It's the law of averages. All I had to do was not screw up an 8- or 10-minute hunt.

I paced the shot off at 48 yards. Boy, that extra half-inch of shell and extra 30 or 40 pellets made a huge difference compared to the 3-inch 12-gauge magnum shells I've been using in my old turkey gun.

Hubert
Congratulations Dan. After being skunked the last to years, I didn't go this year.
Reply