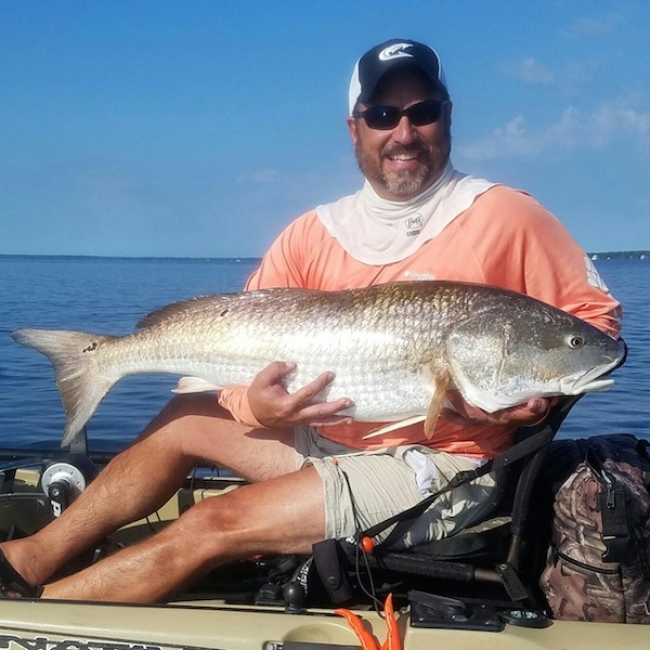 Friday was an epic day for my group fishing from a kayak. Friday morning at first light we launched classified launch area and headed out on what would be a trip of a lifetime. Three of the four were searching for their first bull red drum from the kayak while one other was leading the rest based on his years of experience. It was long before one of the 'rookies' hooked up an old drum with his popping cork rig and landed a 40+ inch old drum and after the appropriate pictures were taken he was released unharmed. Shortly thereafter the old salt of the bunch hooked up with a nice 40+ inch old drum as well. It went back and forth like this for a while until I was able to hook up with my first of the day however, I didn't boat the first as the leader broke at the jig from my failure to properly adjust the drag as it neared the kayak. The group continued to fish and boat fish. I finally hooked into one that took me for a great ride and was able to land him. I have seen many pictures and videos of these fish but until you experience it up close and personal you have no idea of just how large and majestic this fish are. I was amazed at it's beauty.

Overall it was a great day for the group as eight 40+ inch old drum were boated and there were two that broke off. The best part is we were off the water before noon.

HogBlog
Looks like a good day! Glad to see someone else posting up some kayak fishing stories. I haven't been able to get out as much as I'd hoped this summer, so I've been hoping to experience it vicariously through some folks on this forum.