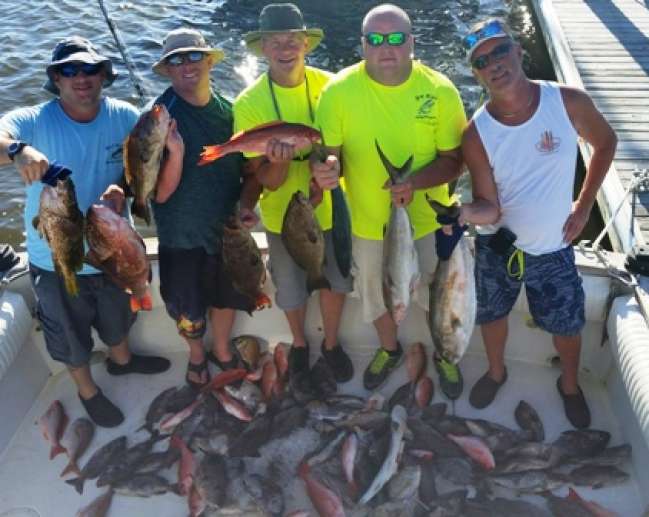 08-15-2016
​
Had another offshore trip today with some long time clients, Robert Timson, Huntington; Chuck Timson, NY; Brandon 'Hoss' Evans, Smithfield, NC; Jordan Cutchins, Selma, NC; and Victor Denoble, Garner, NC, that have become, like a lot of other fisherpeople, good friends with me through Yeah Right Charters.
​
The seas were calm and it was an action packed day of catching limits of Scamp Grouper, Red Grouper, Strawberry Grouper, Black Bass, jolthead porgys, Gray Snappers, Silver Snappers, Vermillion Snappers, Rainbow Runners, Sharks, Amber Jacks, Barracudas, Even had a nice Mahi Mahi almost to the boat when it was devoured by a pack of Cuda's, which we caught one of those barracudas and released after the photo shoot.
​
Along with all the fish we caught and kept, we released banded rudderfish and lesser amberjacks since the season was closed. We also caught and released an approximate 225 pound bull shark.
​
Another awesome day of fishing with some awesome friends!!!!
Reply