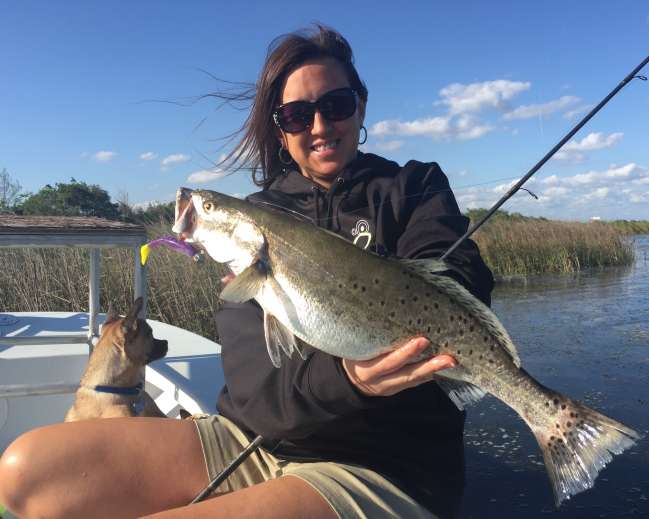 Spring time is a time of high winds and frequent fronts. Typically harsh SE winds blow good water in certain estuaries bringing in plenty bait fish with predators fish like the speckled trout to be waiting eagerly to eat up getting nutrients for the their spawning season. If you are going to wait around this time of year for perfect calm and sunny days, well let’s just say your not going to be fishing that often. I’m not saying go out there in gale force winds but avoiding the water because they are calling for 15-20 mph SE winds could be a mistake. During this time of year, hard easterly winds can create a stronger than normal incoming tide and a lot of times generate a more aggressive bite from the speckled trout. If you fish an area that is somewhat protected on an East or South East wind you should certainly be eager to fish under high SE winds. Most importantly boat traffic will be way down meaning the pressure on the fish will be at a minimum. When you get an over fished area to yourself great things can happen. Some of my best days ever have almost always been under extreme weather situations. Not only does it keep boat pressure off big trout it makes the big specks let their guard down. Our best days always seem to come on high wind situations. Usually a front is approaching, barometric pressures are dropping, and trophy trout begin to eat up as they feel a weather change coming. When you get these situations around the full moon of April, May or June you have to GET OUT THERE!!! Days of 10-15 five pound trout I have caught under these circumstances. Most recently an epic day was In June of 2012′ when Capt. Jonathan Allen, Kris Robert and I boated 5 six to seven pound trout in a row in the mist of a 25 mph South wind. We were about to leave after the third try of setting the anchor. Finally just before we all agreed this was our last anchor try it finally caught and we made our own historic fishing trip. We caught a 31 lb five fish speckled trout stringer. Just days after Capt. Kris put a client on a CCA Star fish that lead the board for two months on a day that was calling for 100 percent rain. Capt. Kris knew that not a boat would be out that day and he knew he had a shot to put some one on a legitimate boat winning fish and that is just what they did boating one 7lbs even in the month of June and lead the Star board the whole way just coming up short as they were beat by trophy trout legend Bob Weiss in the same spot.

To visually see some of the harsh weather situations we fish in looking for that next bite in hopes of catching the next one for the wall just check out some of our DockSide TV episodes especially our latest one we just aired this spring. Make sure to be safe out there but get in on the action. Every area has a wind direction that is horrible but the old saying you have to go to know could never be more accurate. Until next time “good fishing”