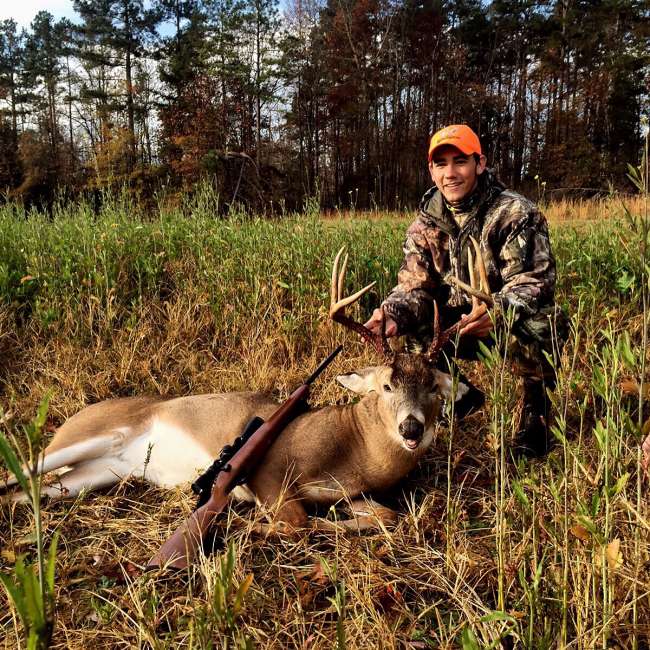 My name is Skylar Martin. I took this massive 7 year old, 10 point buck on Novemeber 28th in Guilford County. I had been watching this deer on trail camera for the last 5 years and never seen him in person. it all started about a month and a half ago, when my dad (Dale Martin) had went hunting after work, and since it had been raining he got off early. Around 5:30 I had got a call that he had shot at a big buck and needed help finding it in the rain. When I got there we couldn't find any blood with the downpour, so we gave up until the next morning. The next day we looked for 3 hours and no trace of the buck, so we just prayed that he had missed. With the angle shot he had to take, he had to shoot him in the neck and it was a difficult shot. Then on Novemeber 28th, we were headed to the woods real early. I had a great wind and wanted to get into the stand as quick as possible. As I was walking in, i had two does blow at me and run off, and from that point I thought I wasn't going to see anything. I climbed into the stand over looking a wheat field, and a salad patch that was behind me, yet I had never seen a deer come or go to it. Around 7:25 I had a little doe come out into the cornpile, and stayed for around 15 mins. When she got done eating she came straight towards me bleating, and it being such a cool experience I grabbed my phone and took a video of her. She ended up going into the salad patch and eating for around 10 mins then went into the woods. It really shocked me that she went to it. About 10 mins passed and I turned around again and saw a body flash in the woods behind the salad, so I grabbed my Nikon Binoculars and noticed it was the huge 10. I immediately grabbed my Mosseberg 30-06 and put the cross arrows on him. He was on a steady walk and I had to take a shot fast. I tried to stop him by yelling and he never would, so I took a free hand shot at 120 yards at him. There was so much brush in the way I couldn't see where he ran, and because the grass behind the salad was so tall and that's where he was standing. After about 30 mins I went to go find him. My dad and mom walked behind me going to see where he was standing. As I got about 50 feet from where I shot him, I saw a head with a huge rack lift up off the ground. I had dropped him in his tracks but he wasn't dead. I had to take another shot on him, and after around 5 minutes he had took his last breath. When I got too him I realized something very odd. He had three holes inside of him. One in his neck, and two behind the shoulder where I was aiming. I figured he had been fighting another large buck that we had on trail camera and got stabbed in the neck, but soon realized it was my dads Thompson Center muzzloader hole. This deer was truly a fighter and proved himself against the odds. I haven't scored him but figure it will be in the 140-145 range, which is definitely my biggest yet. Biggest surprise to me was the whopping 215 pounds this brute came to weigh.
- See more at: http://www.northcarolinasportsman.com/lpca/index.php?section=reports&event=view&action=full_report&id=193325#sthash.wYr0tvby.dpuf
Reply

Duplin County Bowhunter
Re: 215lb Monster Killed By Stokesdale 18 Year Old
He is a tank!!! Congrats and thanks for the great story!
Reply