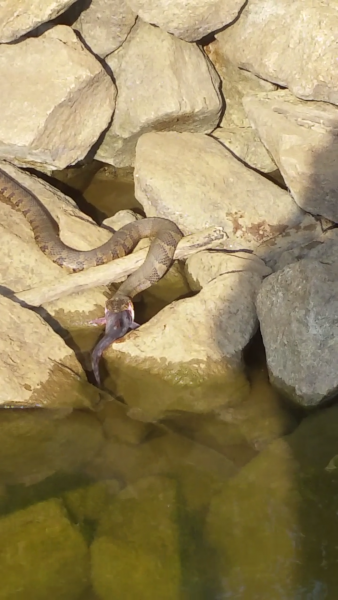 Was doing some crappie fishing on falls Tuesday and was checking sonar as we came under the bridge. I saw the tail of a fish flapping towards the bank and it caught my eye. when the fish got closer to the bank I noticed a copperhead had a channel cat about half a pound maybe 3/4 of a pound in his mouth. I first noticed it about 20 yards from the rock bank and the snake drug it up onto the rocks and was trying to pull it in but the top spine on the fish was keeping it from going in. Not only was it one copper head it was 2 and when it realized it was coming in and the fish still had some fight in it the snake shoots back out of the rocks and carries the fish in its mouth about 20 yards down the bank in the water. it starts pulling the fish back onto the rocks and gets the fishes head in his mouth and starts to swallow the catfish. Durring this the other copperhead came swimming along the bank to where we was watching and was swimming in front of the snake eating the fish and sliding in and out of the rocks as it was 'on watch' while the snake was eating the fish. It was unbelievable but thankfully i had my cell phone and got the whole thing on video. I took a couple screen shots from the video. It was one of them moments that no one would believe but I got it on video!!!

Tight lines and better keep an eye open for snakes they are on the hunt.
Reply

StixandString
Re: Falls Lake NC
I believe that is a water snake (northern). Do some research and you'll see. Body is too long and narrow and copperheads don't have that many diamond patterns on them or at least not as broken of a pattern.
Reply