Mahi on the Lite Line 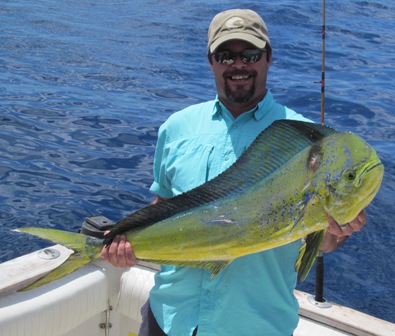 We started off in the 360's and from here we never had to leave. It was action from first drop to the last. The bottom fishing was as good as you could ask for. We literally loaded the boxes with Black Bass, trigger fish, Grey Snappers, Silver Snappers, Vermillion Snappers, Grouper, Rasp's, Sharks, Amber Jacks, Jolt head porgys, and the light line today kept the guys busy fighting nice Mahi Mahi all day.

Brian Slevin will be getting a nice frame worthy 'Release Certificate' from Yeah Right Charters for the release of a big six foot Black Tip Shark. We sure would like to have seen the shark that ate a big Red Grouper today that Wayne Couick was fighting. All he got was the head, the shark ate the rest!!!!

I guess the day was best described when we got back to South Harbour Marina when Wayne Couick said ' I have been on a lot of fishing trips, but, today was the best one I have ever been on' Thanks guys for your kind comments and Thank You for choosing us for your trip. Your trust in our Charters means everything to us because without our fishermen we wouldn't be here and we know that!!!

Winds permitting, we are going to try to do it all over again tomorrow and nearly every day now as we are just about booked solid now. If you want to get in on the fall fishing call soon as we are now booking into October.

Thanks for stopping by and till next time, God Bless You All!!!

DEUTERONOMY 1:30 The LORD your God will go ahead of you and fight for you as he did in Egypt; you saw him do it.
Reply

Kingsransom42
Way to go Captain Butch! Keep on putting them in the boat!!
Reply