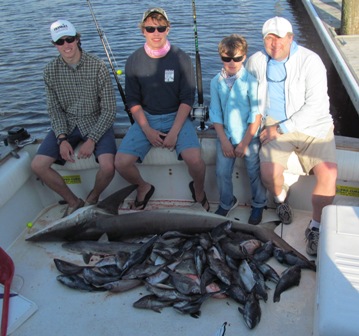 Today was one of those days that you had to keep pinching yourself to make sure it wasn't just a dream. We left the Marina this morning with John, John Evan, Luke and Will Laughter from Avondale Estates, GA. The first stop we made was the place for big ole knot head Black Bass. We made a few drifts in the near straight up tide and it didn't take very long until we had everyone's limit of Big Black Bass.

The only problem after that was it seemed every where we went we couldn't get away from Big Black Bass. Some were so big they looked like they had blue tennis balls on their heads!! But not to be discouraged I kept moving from rock to rock and we hit the mother lode with Triggerfish, Grey Snappers, Silver Snappers, Vermillion Snappers, Jacks, American Red snappers(released), Joltheads, Calico Bass, and I am sure I forgot some!!!

Now let me get to the good part. Not that what I just said wasn't good, it was actually great but I think the greatest excitement came today when I found an area that was literally loaded with huge Sharks. After catching and releasing several big sharks, and breaking off even bigger sharks, getting photos of even bigger sharks........... Then the guys got hooked up with one of the biggest Black Tip Sharks I have seen in a long time. After making a positive ID on the shark the decision was made to harvest our legal limit of one per vessel over 54' fork length to have shark steaks for the grill and this Black Tip measured out at 95 inches and a 351/2 inch girth. If you don't like shark to eat then most likely it wasn't handled properly after harvest they are delicious and we have the experience to go the 'extra mile' to see that what you harvest will be he best you can get!!

For the first offshore trip of the season I don't see how it could have been any better. What this means is that I have set the bar kinda high now for the rest of the season..... but if you know me you know I am never satisfied until you are satisfied!!!

If the weather lets us we will be having reports now for the rest of the fishing season on a regular basis. We are nearly booked up for this season and are booking daily now. Call soon if you want to fish with us this year or you will miss out again!!

Taking tomorrow off to work on the new backwater skiff then back at it Friday. Gonna be lots of info here this year so stay in touch. For you guys wanting to go King Mackerel Fishing the water temp at the Horse Shoe today was only 62 degrees. Heard on the radio that there was lots of bait in the tower area but never heard of any kings caught.

Till next time, Thanks for stopping by and God Bless You All!!!

PROVERBS 22:4 Respecting the Lord and not being proud will bring you wealth, honor, and life.
Reply