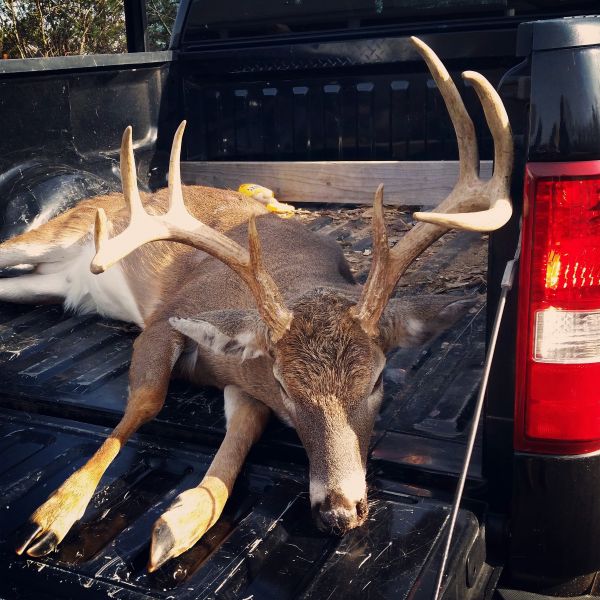 Cool story on this buck... last year he came out looking for does about 3:30pm one afternoon... he was probably 100 yards away, and I shot him through some thicket... he went down and I knew I'd gotten him... I got off the phone with my husband and looked up, and his rack was now FACING me, where as before it was from the side. I shot at him again, and he jumped up and ran away. We gave it awhile and went looking for him. Found a blood trail, but it kept getting smaller and smaller... tracked it for 150ish yards through the woods, and the trail was gone at an intersection... I was devastated but prayed that he wasn't badly injured and that I would have another chance at him again sometime.

Fast forward to this season... I had been hunting another spot on our land where we had seen a monster hoping for him... well, I went back to where I'd shot this guy last year on Thanksgiving night, and then the morning after Thanksgiving, I saw what I thought was a decent buck first thing after daylight but just got a glimpse of him because he ran off into the woods... I thought darn, I think he was a really nice buck... had been seeing a lot of does, some in heat, and some smaller bucks... at 9:30, a spike started after some does, and this buck must have not liked him doing that, so he charged up the hill from a pond to the oaks to see what was going on (a buddy in a nearby stand saw him charging, but I didn't). I looked over to check on some does eating briers, and there he was... staring at me. My heart about exploded but I tried to re-adjust and kept getting caught up... him and the does must have looked at me for a good 45 seconds... I didn't have the best shot, but I knew I needed to take it... I moved once more to be 100% ready, and he moved a few steps not knowing what was happening, and that gave me the perfect shot! He dropped and I couldn't believe it. I went up to him, saw that he was a beautiful 9 with a lot of mass and then saw another small point making him a 10. THEN, I saw on the top of his back where there was a dip in it with an old wound with missing hair. I was just so thankful that I had another chance at the buck that I missed the year before and that he was nicer than ever! It was more special getting him this year because I'm pregnant with twin boys... so it's their first buck!! Took him to get mounted and they green scored him at 130 with a little over a 17 inch spread.
Reply

FairChaseNC
Awesome
Congrats on your twin boys, a great buck and a day in the woods you'll never forget!
Reply

Camo Familyman
What a story!
And what a happy ending too! It's not often you get a second chance on a buck like that...but the fact that you did and made good on it makes for an awesome story. The icing on the cake is that he had gotten even bigger! You're right...that is a cool story. Congratulations!
Reply