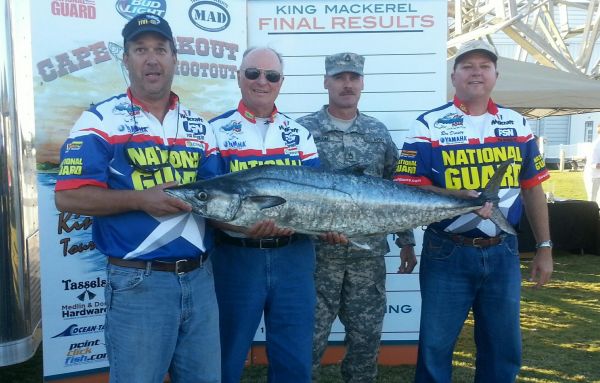 What an incredible weekend of King Mackerel fishing! We were fishing in the Cape Lookout Shootout King Mackerel championship and were fortunate enough to come out in third place with a 48.72. congratulations go out to the Sic Em team with an awesome 58 pound fish to win the Championship!

One of the best fishing days that I have had in a long time as the fish were chewing! We caught at least 12 kings releasing most of them since we had a bigger fish in the boat. We fished off of Hatteras, but I heard the fishing was great from North West Places all the way to Hatteras. I am attaching a picture of the fish with from left to right, Matt Gravitt from Richmond, Ron Dorsey Sr. from Henderson, Sargent Trevor Hanlon of the North Carolina National Guard from Morehead City and Jon Dorsey from Henderson. The fish really fooled us on the weight as it was so short and fat. Really a funky looking fish! Anybody ever seen such a hump back king mackerel?
Reply