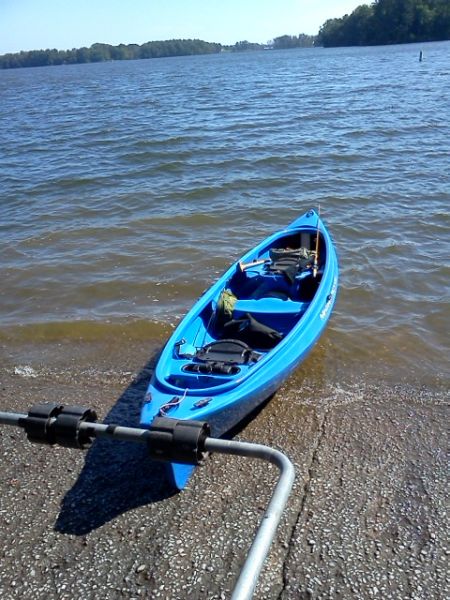 >> Bluegill Missing – I talked to my friend, Don Schmotzer, yesterday. That guy is a local waters 'guru'; he’s forgotten more about our lake than I’ll learn. He told me where and how deep I should find fish. All charged and ready to go, I took off – and ended up with a Bluegill Bustaroo. One dinky little 5” sunfish fell to a slip floated worm, in the branches of a downed tree. But aside from that puny grunt – nuttin. Even the reliable DNR Fish Attractor was a strike out. There are a gazillion mini-gills ripping around the shallows, but they waste precious bait and time. Where were the big bluegill? Off to parts unknown, it seems.

>> Small Bass Like Worms – Fortunately, 6-8” basslets still seem to enjoy a juicy red worm. I found a rip-rap bank with full morning sun, with the wind pushing water head on to it. A small slip sinker rig tossed near that bank would get a basslet on most casts, resulting in an itsy-bitsy tussle. It’s not the Elemental Battle with Nature I’d hoped for, but it passed the time.

And that sunny rock bank might be a “hot spot” later this fall and next Spring.

>> Surface School Feeding Rumble – After toying with the basslets, it was time to voyage across the inlet and start back home. I dug in, the paddle bit water, and the passage was begun.

Flogging along about halfway across (400-500 yds. from shore), I found myself surrounded by a school of fish feeding at the surface. This was out in the middle, with no obvious shelter or cover. What with the stiff breeze, I wasn’t sure if it was waves or fish. Once established they were fish, I still couldn’t really make them out. All I got was a big roll here, or a hefty splash there. I was certain of one thing: something sizeable was feeding on something else, and I was right in the middle of it.

Being enterprising (if not handsome), I did the only logical thing: I HASTILY RERIGGED! I tied on a baitfish mimic, hoping to tempt whatever it was to take a bite. In this case, I put on a trusty, “Little Cleo” wobbling spoon. Then I cast out and started paddling, thinking to troll my spoon in and around the feeding frenzy. A little voice in my head suggested I might regret this; all I had were whippy rods and 6#, lightweight bluegill tackle. But, hey - what else was I gonna do?

Less than a minute into this venture and I hooked a fish in the melee….

So what was it? Well, it was a small striper. Only about 8' long, it was kinda cute. Not hardly the leviathan I had expected, though, and hardly a legal keeper. This smelly little thing was causing all the commotion?

No, really, it stunk to high heaven. At one point I dropped the thing to the deck and had to feel around for it. Man, let me tell you, that little fish reeked!

Then it hit me - the whole school smelled of fish. You know how it is, you’re out on the water alone and you become part of things you couldn't experience from the safety of the couch. It’s the joy of Being Out There, right? Well, this stench was one of those moments; I’ve heard of smelly, fishy smells on the water, and this was my first.

Meanwhile, the BIG fish were still at it. By this time I’d figured out what was happening. A large pod of gar were feeding around this school. I don't know if the gar were feeding on the stripers, or if BOTH were feeding on some other forage. But predatory gar were what I could see. Every once in a while, one or another of the gar would shoot up near the surface, grab something, then go back down. I’ve always thought of gar as solitary lurkers, hanging around the shallows waiting for easy meals to blunder by. But these gar were 'en masse' and working that school. Not what I expected.

About then I wondered, 'Uh oh, what kind of gar feeds in open water on massed fish?'

Which is when my spoon was taken. It wasn’t a rip-the-gunwales-off charge; rather, my pole just started to bend - and then double over.

I lunged for the Daiwa US-80 trigger spin and frantically backed off the drag. I didn’t know what I was faced with and I wanted that drag tension relaxed. Once it was squealing, with line stripping off, I dialed tension back into the system. The fish took line, but I finally I got it set where I could at least pump the fish and attempt to turn it.

And so it stayed like that for a few minutes. The fish didn’t want to come, so it would take more line. Then, it would slow and let me move it. Take some more line, then head back to the boat. I had to be very careful – remember, I had an undersized, buggy-whip rod and 6# line… and a leader of only 4# TEST FLUORO at the end.

Yes, I had a 4# leader on the end. Would that blood knot hold? I wasn’t going to stress it and find out. This was gonna have to play out s-l-o-w and e-a-s-y.

After a good bit of see-saw action, I got the fish to head my way. I prayed a million prayers, begging every favor you could want from the Fishing Gods. And they smiled on me. The gar, for that’s what it was, finally came along side.

About 2 1/2 feet long, it peered at me with its steely eye and swam back and forth alongside my canoe.
It lunged several times into the depths, forcing me to give line or run the rod beneath the water to follow it's plunge.

In time, the beast relaxed and just loafed along the gunwale. Once, it stuck its toothy nose over the side to look around the interior of my boat.

Then it hit me: How was I going to unhook the critter? I had no gloves, and no fish gripper. If you don’t know much about gar, suffice it to say every part of them is sharp. Their long snout is full of needle teeth, their gill plates are honed to a fine edge, each scale a razor in itself… these prehistoric animals haven't changed on 100,000,000 years. They’re the velociraptor’s of fresh water.

Still praying to the God’s, I hurriedly snapped a few pics as the gar lumbered around.

On its final pass, I reached down with my little multi tool and got hold of the treble hook. The pliers were dwarfed by the fish, but its long, slender snout was positioned just where I could grab the hook. A quick twist and it was off! The gar backed away from me, sulking. It turned, almost lazily, and sunk beneath the water for good.

I looked at the hook, still held tight in my dinky pliers. The trebles were bent and misshapen. But, it had held together, and the battle was won. I’ve gotten the hook back into shape, and this ‘Little Cleo’ is now held in that high esteem reserved for killing baits. It is, and forever, A Lure That Has Caught a Fish.

What did I learn from all this?

1. Lake Murray is BIG and expansive. Large fish have plenty of room to prowl its depths. This aint no podunk farm pond, bubba!
2. Fish must use docks and downed trees as the only shallow water cover. There isn’t much in the way of weeds.
3. I'm pretty sure the better fish are using the bottom structure, like channels, humps, drop off’s, depth breaks, etc. for cover.
4. Drifting with wind and bottom bouncing across points might be the way to go.
5. Gar are fun to catch!
6. I need to up size my tackle!!

Somewhere down in the depth's, I feel a large catfish waiting.
Reply