THANKFUL TO BE ABLE TO FISH OUT OF SOUTHPORT, NC 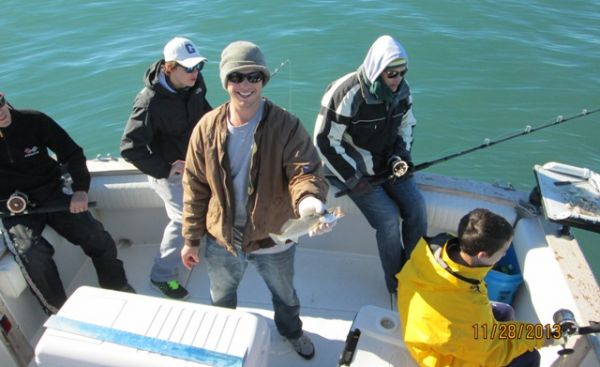 We had a full day offshore trip scheduled for today; however, Mother Nature had other plans for the crew of the Yeah Right II and we were forced by the NE winds to turn this into a nearshore trip in search of Grey Trout and the exceptionally large Red Drum that inhabit our waters this time of year! Joining us was James Leininger or Merritt, NC alongside Charley Finn of Chapel Hill, NC and Jim Leininger of Pittsburgh, PA alongside Brian Bomquist with his two sons, Nate and Charley from Washington, DC.

The water was much dirtier today than on Monday and the NE winds with the passing low pressure system had really done a number on the bite and the fish were wanting to be difficult to say the least. First stop there were some Croakers and Grunts to be boated but the Trout had seemed to shut down completly. Shortly Capt. Butch decided to make a move and look to another school of fish a little further offshore. The water was dirty here as well and the bite was slow but there were a few more fish to be caught. Even though the fish were not wanting to cooperate we were all having a great time and these guys were really enjoying just being on the water. Capt. Butch in his determination decided to try another spot.

This time with the winds having subsided slightly this afternoon, we pushed on offshore a bit further and this proved to be the move that made the difference in fish on the table or simply a fun day fishing. Soon after the lines were deployed a nice Grey Trout was boated, then another and then several more within a mixture of Black Sea Bass and more Grunts. Most of the Black Bass were missing the 13' size limit by a mere 1/8'!!! But these guys were able to pull out a few that were big enough to take home to the table!

Great times spent with a great group of guys aboard the Yeah Right II!

Capt. Butch, Barbara, myself, Bodie and BoBo would like to wish each and every one of you a blessed and happy Thanksgiving!!!