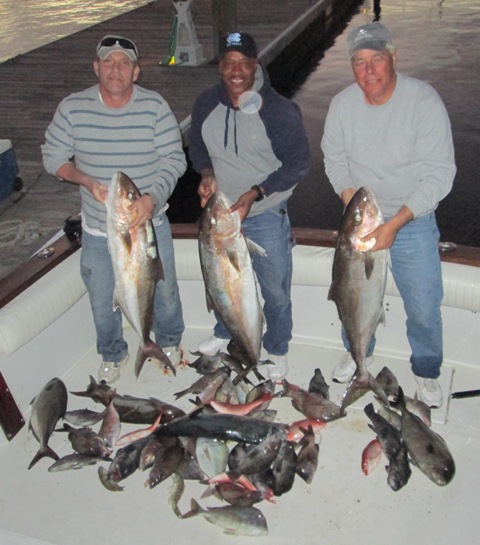 I couldn't believe it...... After a week of windy conditions I woke up Saturday morning with a NE wind of 4 knots and a 5 foot SE wave of 7 seconds. I knew our 34' Sportfisherman can eat these conditions for breakfast and never get indigestion!!!

So, we met up with David Bailey, Jesse Williamson, and Bo Ramsey from Fayetteville, NC. and after several years of having to cancel our scheduled trips due to rough seas we were finally going to be able to head offshore. As I had figured, we were greeted with a SE swell that was a real pleasure to ride out in, actually, making it hard to stay awake with the smoothe rolling ride!!!

We were on a Full Moon cycle and I was hoping the current wasn't too bad, well, it was, but the guys caught on real fast how to work your baits, and it wasn't long until the fish were coming into the boat. Jesse said he sure hoped we would catch some Trigger fish today, well, that was the first fish we put in the box today, but it surely wasn't the last!!!!

I set out a rod for some AJ's and that didn't take too long either to get a real nice fish hooked up. All three guys fought and boated at least one AJ in the 30+ pound class. Think they were suprised at the power these fish have, don't call 'em 'reef donkey's' for nothing!!! I know they will be suprised at how good they are on the grill after Phil, our professional fish cleaner at South Harbour Marina works his magic to make clean and very tasty fillets from each one!!

Also after todays trip we will be sending some very nice, frame worthy, 'Release Certificates' for several AJ's that were caught and released and for 2 very huge Sand Tiger Sharks that we photoed at boat side and then set free.

Along with the Release's today we had Vermillion Snappers, Jolt Head Snappers, Silver Snappers, Scup Snappers, Amber Jacks, Big Black Bass, Triggerfish, Almaco Jacks, Calico Bass, King Mackerel, Grey Snappers, Sharks, and a few fish we never seen that couldn't be turned!! I would like to be able to take all the credit for todays catch, but again, had the guys not worked the current properly it wouldn't have happened. Good fishermen make my job a lot easier, and make me look good!! It's all a team effort, great job all!!!

Fishing this time of year is just GREAT!!! when you can get out offshore. And if you can't get offshore, the backwater fishing is GREAT this time of year as well!! I even seen a school of Spanish Mackerel about 6 miles off Bald Head Island coming in, I know, the water on the beach is cold, But, I seen one jump, or I wouldn't have believed it either. Don't expect to see that again after this next front passes until next year though!!

Gulfstream last weekend produced Black Fin Tuna, Wahoo, and some Mahi mahi. Wahoo and some Blackfin should hang around all winter. Just be careful going out there this time of year, it can change really fast and it's a long ways offshore!!

Hope to be doing some fresh water Crappie trips this week along with some backwater trips for Speckled trout and Red Drum. Haven't been to the near shore reefs lately, but, I'll bet the Big Bull Red's and Grey Trout are still there. Jig up some Pinfish and or Pigfish, rig 'em on stout tackle 'carolina style' put them on the bottom and get ready to hold on!!! I jig up the trout with 'Stingsilver jigs' and expect an occasional Bull Red to pile on one of those from time to time. Got some more offshore trips booked next week, weather permitting, will have more to report on those soon!!

Whiting fishing in the river and beach front looks like a favorite sport at this time. I haven't heard any reports yet, but, If they aren't biting, plenty of fishermen are expecting them too. If I can work it in this week, I might slip out and try to get a 'hands on' report as my last years stock is running very low at this time.

I love letting you know about the fishing, especially this time of year, the big crowds are gone, the weather is cool and comfortable, and most of all, The Fish Are Biting!!!!! Sure hope you can find some time to get out and do some fishing this time of year, it's some of the best of the year!!!

More reports soon, Till next time, God Bless Everyone!!!!

PSALM 1: 1-3 Happy are those who don't listen to the wicked, who don't go where sinners go, who don't do what evil people do. They love the LORD'S teachings, and they are strong, like a river planted tree. The tree produces fruit in season, it's leaves don't die, and they will succeed in everything they do.
Reply