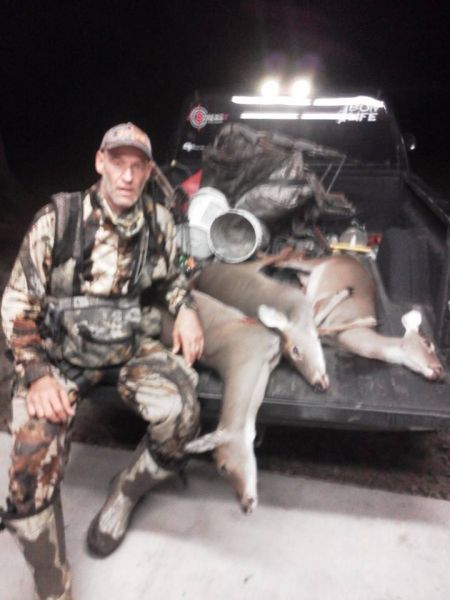 Well today was opening day of gun season here in the southeast and once again I found myself helping get the population under control on this farm. Wildlife officials say that 50 deer need to go. I've been blessed with 7 of them so far and they won't go to waist, that's for sure.
I shot the first one with the bow and on film for a very good friend that is having some serious medical issues and cannot hunt right now. Please keep him in your Prayers. He asked me to shoot one for him today before the hunt. I told him I would and try to get it on film, thank God for the opportunity, I'll be e-mailing him the video. The other two fell prey to the .270WSM and all were shot in a period of about an hour and a half.

This second picture is one that literally got a 'Parking Ticket'. It scared the mess out of me when I found it in the dark. I thought it was still on it's feet! Bases Loaded today!
Reply

Viperx4
I think my grocery list is full! I don't have to worry about eating this year. Now for some long sits waiting on a big one. Well maybe one or two more culls!

Duplin County Bowhunter
Very cool Viper!! Feeling the freezer with the leanest meat you can get is not a bad thing lol....Good video as well man. I have got to get busy lol
Reply

TonyBalogna727
Might have to change your screen name to Sniper!! I have a farm that is doe heavy too, guess I need to get to work. Good Luck on collecting you some bone.
Reply

DaCannon
Love that pic of the wedged doe. I can just imagine walking up on it and about $#!++ing myself. I loves me some doe venison. Please let us know what, if anything, we can do for our fellow hunting brother that is going through tough times. (other than prayer, of course)
Reply

Viperx4
Thanks for acknowledging Our member whom is going through a scary period with Cancer. His hunting is done for the year and as he asked me to do beyond Prayer is hunt, video if possible and post for him. Here is a link to his profile page. Maybe contact him through his e-mail and give him words of encouragement. http://www.northcarolinasportsman.com/lpca/index.php?section=user&event=view&action=profile&id=109569
Reply