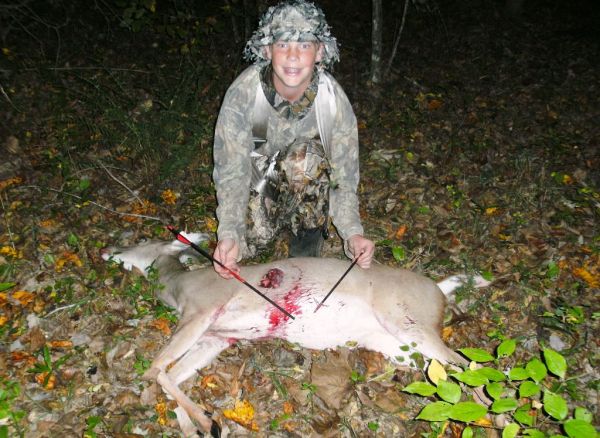 We went this morning and I handed a parking ticket out to a doe but my son didn't see anything.
I thought it was too hot this afternoon but my son really wanted to go so guess what - we did. Got in the stands @ 4 and about 6:45 he text me that he just shot a doe. I told him to sit tight and I'd come to him when I got down at dark. When I got down I went to the house, got the 4wheeler, and went to his stand. It was dark at this point and as he was telling me how the group of four does came in I easily found blood where he shot but no arrow. Started following the blood trail and in 20yds we found 1/2 of the arrow. Went another 5yds we found the other half. Went 20yds further and the blood trail dried up on us. Scanned around but couldn't find anymore blood. So I told him to stand at the last blood we saw and I headed same direction we had been going. I got about 10yds and saw the reflection of eyes in my light so I called Hunter to where I was. We watched the eyes go up every now and again about another 20yds in front of us and I told Huntman that it was his deer but that the deer just hadn't given up yet. Well we watched this for about 5 minutes and I thought this just didn't seem right. The deer wasn't going anywhere just head up and then back down or so I thought. I told Hunter to stay there and I eased closer then all the sudden I realized what I was seeing so I clapped my hands together and ran a darn coyote off of Huntman's deer. I haven't ever had that happen before but that joker had gotten on that doe quick and luckily we got there before he could do any damage. Sure wish I had my gun with me.
Anyway Huntman made a great shot on this doe - his 1st bow kill - with his Hoyt Banshee shooting a 100 grain Rage Chisel Point broadhead. He hit the doe great and I was really surprised that it went as far as it did. I guess maybe because he didn't get a total pass through - not sure but doe down at any rate.
Reply

Tagone
AWESOME!!!
Way to go Huntman!! Cool story too. Justintime I know your proud. Can't believe the yotes are that fast.
Reply

Viperx4
Huntman Scores!
Way to guys. Huntman I know your dad is proud of you but also a lot of members on this site are proud of you. I bet you were about to have a heart attack when the doe first came in and you knew it was about to happen! That is awesome buddy!
Reply

justintime
Thanx
Huntman says thanks for the comments fellas.
He was so funny cuz he was telling me that he was shakin' so bad that he didn't think he was going to get the shot off. Told him that's why I love hunting and if I ever lose that feeling I'll probably be done. lol
I'm guessing that yote musta been pretty close to get on that doe that fast. Sure did get me to thinking about things a bit differently.
Anyway I am proud of him - he has done pretty well.
Thanx again!
Reply

Viperx4
Shakes
Tell Huntman that Viperx4 shakes like a Chihuahua sitting on a block of ice every time one gets within 40 yards of me!
Reply

Duplin County Bowhunter
Congrats
Hey congrats Buddy!! Truly a accomplishment you two will never forget...Looks like you made a great hit on her. I know there will be many more critters that meet the same fate as this one by Huntman in future years...Anyway kudos to you to Dad for introducing him to the great outdoors.....
Reply

justintime
*
Thanx Lady D! I tried to respond to your post the other day but either my pc was messing up or this site was. Anyway hope you're havin' some luck.

Viper - I know what you mean and I love that feeling.

DCB - Thanx and won't be long and you'll be doing the same. lol Huntman is finding out that this is an entirely different game from shooting them with a gun.
Reply

Diane00
Thanks Justin
Thanks. I'm heading to hunt with my dad in the eastern part of the state,for week. I'm really looking forward to it. Hopefully we'll get lucky and I won't lose any more.
Reply