Anyone ever seen this? 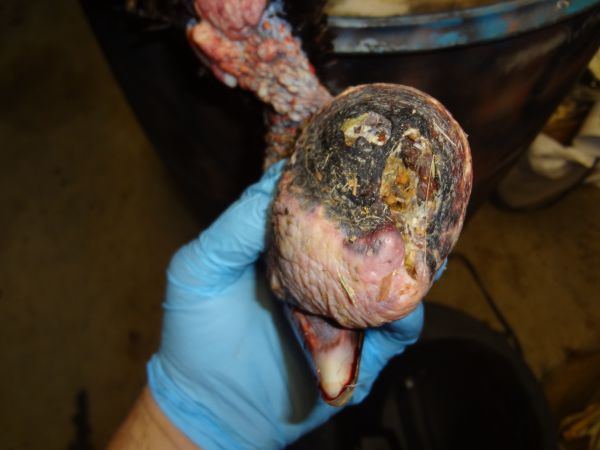 never seen this before meeting with a Biologist to check it out.
Reply

justintime
Looks pretty funky - GT might have some idea what that's caused by. Let us know what the biologist says.
Congrats on the bird - 1 7/8 spurs is awesome. Too bad about the beard, I bet he'd of had a rope.
Reply 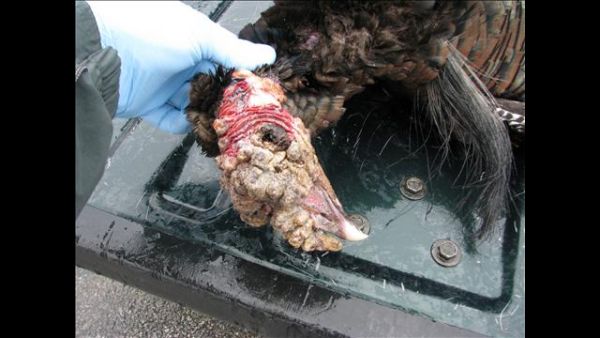 I'm GT but No biologist lol but yeah...Seen It several times...Hard to tell from your Picture but yes it's (LPDV) lymphoproliferative disease virus or the more common Avian Pox. When I first seen this years ago, I assumed someone had shot at the Gobbler and the pellet holes had become infected but it's actually a cancer of turkey and chickens.
Avian pox is an infectious, contagious viral disease than may infect virtually any order of birds, either wild or domestic, including
wild and domestic turkeys. Like I said, Avian pox is a very common viral infection that produces clinical disease among wild turkeys, especially
from the eastern United States.
lymphoproliferative disease virus (LPDV )however was once known to occur in domestic turkeys in Europe and Israel, it was first recognized in wild North American turkeys in 2009. Sporadic cases have been identified every year since then, and its significance for wild turkey populations is unknown. However it does seem to be a disease that has spilled over from domestic to wild birds.
Rare cases of a similar disease has been seen in wild birds in North America, however, it was caused by another different, but related, virus. LPDV affects domestic chickens and turkeys. To date, LPDV has affected only turkeys in the wild, and both sexes can be affected. Wild turkeys have been diagnosed with the disease, including organ involvement, in Arkansas, Georgia, New Jersey, New York, North Carolina, Pennsylvania and West Virginia. Read up on Both and judge for yourself but I say it's Avian Pox....Great Gobbler BTW!!! 1 7/8 Spurs are daggers!!! CONGRATS!!!!!!!!! Here's a Pic of Avian Pox
Reply

Gobblintom
Diane why did you remove your comment lol?
Reply

justintime
Hope that wasn't cuz of my comment. I didn't mean to imply that no one else could answer just figured he'd know.
Reply

Diane00
I didn't mean anything by it,just figured after I read GTs answer he was probably right and I didn't want to look stupid,lol.I thought when I commented that the birds head looked a lot like a picture Don had on his fb page.
Reply

justintime
I didn't think you were the type to be that uptight. lol
Look stupid? Heck I didn't have a clue. lol
Reply

Diane00
LOL,yeah Justin I get wound up pretty tight when it comes to talking about those turkey,I'm just kidding.Good luck the rest of the week.
Reply

Duplin County Bowhunter
Nice bird either way man....I have not seen anything like that around me but I would imagine it happens...Congrats man....
Reply

Diane00
Feeling pretty rough. Who knew a little deer tick could make you hurt so bad. Hope it passes soon.I would love to get one more hunt in.
Reply