Scoutfish
Okay, I admit that I'm feeling just a little extra proud of myself even though it wasn't a matter or rocket science or any other display of amazing human feat.

My Mossberg 500 that I just bought 2 weeks ago needed a sling. Not a problem right?

WRONG! My Mossberg has a big difference between the magazine end than the older ones> Instead of a cap that goes on the end of the magazine, it has a bolt instead. The bolt has a round head with ridges similar to the edge of a dime or quarter.

It stays on the barrle flage by means of a locking nut on the inside threads which thread into the hole in the end of an otherwise solid ended magazine. This bolt is pre tapped and threaded on the head for a swivel eye.

Well apparently, NOBODY carries a sling swivel set that threads into the bolt. Cannot buy just the eye bolt with machine threads, cannot buy a swivel with adaptor>

So here's what I did. Took the barrel off and carried to my local outfitter - who also does not have and cannot order a swivel for my gun - and looked at swivel sets.

WEll, a Winchester 1' swivel & stud set ( part #99740 - bolt action rifle) will work with small modification to the swivel bolt. No modification at all to the Mossberg.

The machine thread swivel bolt is 7/8' long. The Mossberg takes a 1/4' long bolt.

Solution: I cut the eye bolt down to a 1/4' , filed the threads smooth and burr free and
TAH - DAH!

We are in buisness!

Again, no major gun smithing on my part and nothing requiring a degree in engineering....but I am proud I did not have to spend $38.00 when all I needed was a $1.47 eye bolt.

Viperx4
Thanks for sharing that Scoutfish. That's the nice thing about this site. If you have a problem....ask because someone has had the same one before and will have an answer for you. This info will come in handy to someone.
Reply 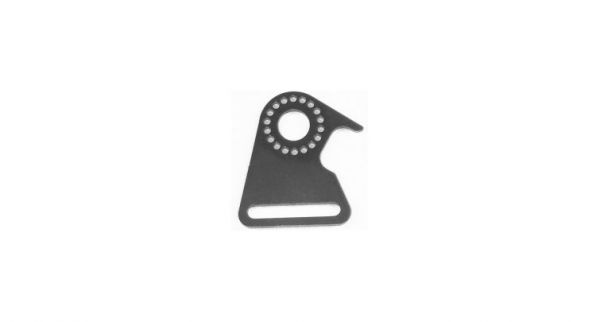 Scoutfish, That's GREAT!! I know exactly what your talking about because I have had a newer 500 but I did find this gizmo to mount a sling but I think I still paid like $15 for it...Sounds like you DIY method was cheaper lol...Thanks
Reply

Scoutfish
From what I could tell from looking at all the different 'Uncle Mike's ' kits, the thread size/type is standard between all the manufacturers.

I bought the quick dettach 1' swivels ( for bolt action rifle) , and eye bolts from WalMart for $5.99.
Reply

Scoutfish
Does that slide over the barrel or does it go between the magazine bolt head and barrel ring?
Reply

Gobblintom
You take the Cap off like your taking Gun apart and this gizmo goes on then you re-install the cap. It has little indentions so you can position it where you like and once you snug Cap back on it doesn't move.
Reply 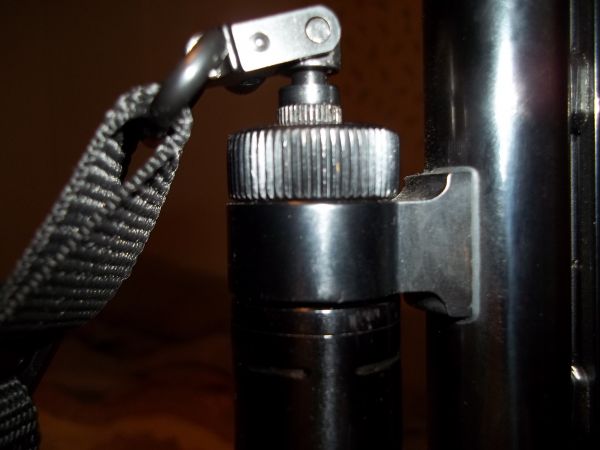 Mine doesn't have a cap per se.

I have a bolt instead of the cap. Top of bolt is pre threaded for a swivel eye bolt.

Gobblintom
Yeah that looks similar to the 500 I had the best I can recall...Isn't that Big knurled part the cap that holds gun together? What you have there doesn't look bad though...Nice work.
Reply 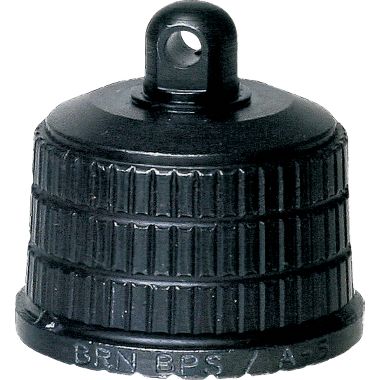 I guess that when you say cap, I am picturing the old style Cap that screwed in over the magazine instead of threaded into the magazine.
Kinda like this one.
Reply

Scoutfish
JUst got an e-mail from Mossberg about 30 minutes ago. They are shipping me an eyebolt...free of charge.
Reply