This piggy didn't make it to market 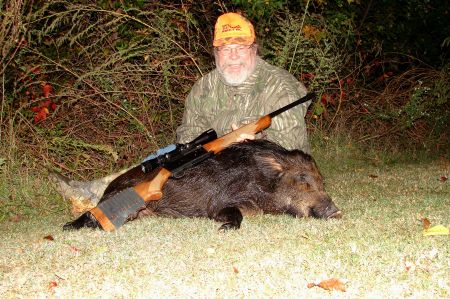 I went back to a friends farm near the Neuse River in lower Johnston County to get a few more pictures to fill in a hog hunting story that is scheduled for the January 2011 NCS and we decided we were there, so why not hunt. It was one of those days when the temperature started dropping in the afternnon and the pigs decided they needed to get out of the swamp and feed.

This sow and several others sauntered out of a cutdown about 5:15 and began milling around. I watched them for a while to see if a big boy came out to claim the area, but when he didn't, I decided to take home some bacon.

One shot from my 30-06 planted it on the spot. It wasn't a big pig, but perfect eating size at a guesstimated 100 pounds. Once I was sure it was down and not going anywhere, I swung on one of the others, but they understood gunshots weren't good news and got back in the woods before I could get on target again.

The pork chops will be very tender and good. I prefer feral pigs to pen raised pork - especially when they are from pigs this size.

Now to go get some grouper for the freezer before the season closes. BLackened grouper and pork chops is an excellent surf & turf combo.

Viperx4
Good Job and great report. You got my mouth watering.
Reply

Avidarcher
Is there a nice Game land area around there where I could hunt Hog and it be worth the time?? I am thinking about trying a Hog hunt during the off season and I am trying to find a couple locations worth giving a shot. Congratulations on that fresh bacon..mmmm...
Reply

Jeff Dennis
And we KNOW that you have some good recipes!!
Reply