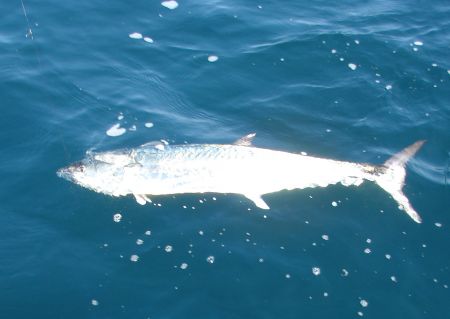 When the wind lays out for a few hours or you decide you can stand the butt whipping for the reward, the kings are biting off the S.E. coast. They aren't very choosy about baits and are acting like they're starved, so they're probably biting something even when we can't get there.

The Cape Fear Sea Buoy out to Lighthouse Rocks has been the hot spot. With the water cooling another couple of degrees, they have spread out to 15 and 18 Mile Rocks this week. They are probably at most of the other rocks in roughly 60 feet of water, but the crowd of boats at these places on calm days is large enough no one can be looking elsewhere.

The kings may be biting a little better on live baits, but they are also hitting frozen cigar minnows and ballyhoo. I don't know anyone that has tried lures, but they would probably hit them too.

While it isn't a usual pattern, the kings are mixed in size from the teens to the fifties. Enough smokers are mixed in, you have to stay with your A game and be ready.

Bait can still be caught along the beach and in the lower Cape Fear River.