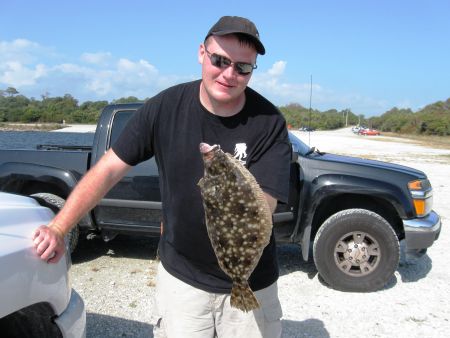 As badly as the red water from rainwater runoff still has the lower Cape Fear River area wrapped up, the fish are biting surprisingly well. On the inside, flounder and puppy drum are the primary attractions, while king mackerel have everyone's attention in the ocean.

The kings are close. They are at Yaupon Reef (AR 425), McGlammery Reef (AR 420), the Cape Fear Ship Channel, Lighthouse Rock and on out. All of these places are within sight of the beach. Bait has been pretty easy to catch also.

The reds are spread through most of the creeks from the Elizabeth River up to Snows Marsh and across the river to behind Bald Head Island. They like live baits best, but so many pinfish are still around it is difficult to fish live shrimp effectively.

You would think live shrimp would attract some trout too, but the trout catches have been really inconsistent. The big catches (numbers and size) are not very regular.

Flounder are still in many of the creeks. A lot are being caught by fishermen after red drum, but a directed attempt for flounder, using mullet minnows and small pinfish, spots and croakers, usually produces more and larger flatfish.

The question running rampant locally is whether the cold snap for this weekend will be the one that finally ushers in the fall. Some record highs were set during the week, so the forecast temperature drop might be a bit of a shock for fish and fishermen. We'll know what happened next week and report it then.