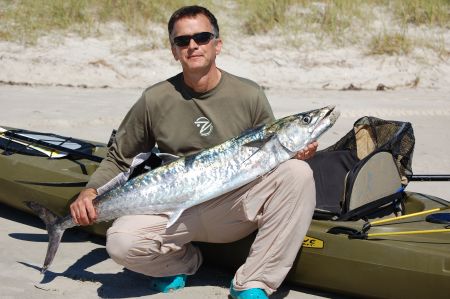 KING MACKEREL! That is the word along the SE Coast. We knew it was going to happen sometime soon, but wondered how all the rainwater runoff coming down the Cape Fear River would affect it.

Most would agree the rainwater runoff either didn't affect the ocean fishing or that maybe it actually helped it a little bit. I believe the latter is true, at least for king mackerel. The rainwater runoff pushed baitfish that were up in the Cape Fear River into the ocean and cooled the water from 81 degrees to 74 degrees and the kings responded.

The kings are hungry and right on the beach. There were a few spotty catches last week, but it began in earnest Saturday afternoon. Since then, fishermen on the two piers (Oak Island Pier and Ocean Crest Pier) have landed dozens of kings and boat anglers are quickly limiting at the nearshore artificial reefs and in the river channel.

Four of the participants reported battling kings, but only one was boated. Congratulations are in order for Kirk Talbert who landed a 45 1/2 inch king from his kayak on Saturday and won the king mackerel division. This is definitely a first for N.C. and may be a first for the entire country.

The king bite is still going strong and should be wide open for the U.S. Open King Mackerel Tournament that was postponed from Oct. 1 and 2 to this weekend. Lots of big fish will be caught.