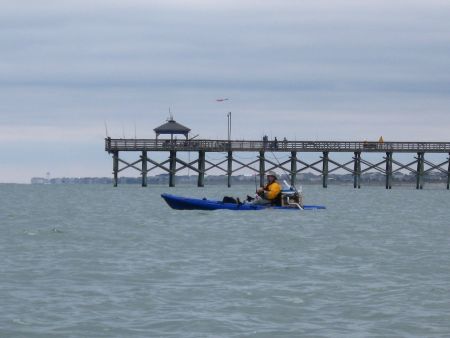 The Southeast Coast is reeling from the monsoon rains of last week, but there are a few places where the fish have escaped the dirty water pouring down the Cape Fear River and are biting. One of the fish that are biting well is Spanish mackerel. Puppy drum and flounder are biting well and spots are beginning to show for pier fishermen in growing numbers. There have even been a few reports of king mackerel.

Several members of the NCKFA arrived early for tournament duties and we had to try a little pre-fishing. After finding some flounder and pups biting in the creeks behind the island, we switched to the ocean. This is the only kayak tournament I am aware of that also has a king mackerel division and we wanted to see if any of them might be around.

We haven't caught a king yet, but the Spanish macks were biting well and showed a definite fondness for mullet minnows and small menhaden under floats.

Mark Patterson, founder of NCKFA, had some real excitement Monday morning when a six foot blacktip shark took a fancy to one of his king mackerel baits. It made a leap he described as, 'Higher than his body length and he was about six feet long,' about 30 feet in front of his kayak. Shortly after increasing Mark's heartbeat and spiking his adrenaline levels, it bit or kinked the leader and got away. He was enjoying an Oak Island sleigh ride and no one had yet caught up to him for a picture when the leader parted.

Kings have been caught from the piers at Holden Beach and Cherry Grove and just off the end of the Little River Jetties, so the kayak fishermen might have an exciting tournament. For more information on the kayak tournament, click on www.nckfa.com.

Jeff Dennis
That's a big 'ole Kayak in the photo - I wonder if it's a Hobie Pro Angler? I hope that the event results find their way onto our tournaments forum tab.
Reply

Capt Jerry
Nope Jeff, the yak in the pic is a Wilderness Tarpon 130T, but the picture was taken from a Hobie Pro Angler. You were sorta close.

The wind was blowing 15-20 when this pic was taken, but it was from the north and off the beach, so it wasn't rough in this area. The forecast for the tournament is for less than 10 knots and again from the north to northeast. The kayak anglers in the king mackerel division might just post some excellent results. I don't know that the results will make it up Saturday night, but they should be there sometime Sunday. They will also be in the NCS magazine.
Reply