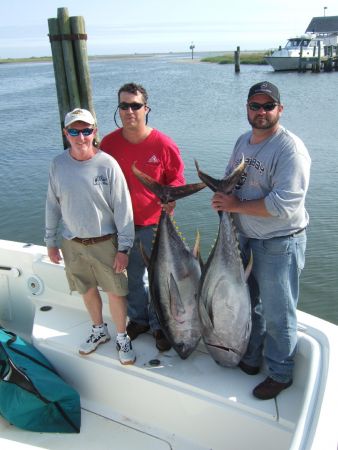 After trying to put together a trip up to fish Oregon Inlet for the last 2 years, it finally came together this past weekend. Having spent many summers growing up fishing out of Oregon Inlet, it had been 8 years since I had been up there so everything was very different. Boy the OBX are no longer just a fishing beach!!!! Ok back to the fishing: Got there Friday night with the intentions of getting everything ready on Saturday and then going down to OI Fishing Center to see what happened and see if I could learn a good starting point.

Talked to a few of the private boats and got us a good starting point; the 675 line in 100 fathoms! With all of the different shoaling that goes on and all the changes to the inlet, I followed out a couple of charter boats to make sure that we didn't start our fishing laying on a shoal! Cleared the inlet about 5:30 and were treated to a beautiful calm ocean. Put the lines in about 7:00 in 71 degrees in 100 fathoms. Got all 7 lines set and started working offshore. We were in 500 fathoms and were just getting settled in when all hell breaks loose. First left short comes tight, then rt. short then right long then left long then both flight lines. We had six fish screeming and the tunas were busting on the spreader bar teaser set up. Pulled one off quick and then chaffed one off on another line. Still have 4 on. Settle the 4 guys in and I get the gloves and gaff out. After 15 minutes of fighting we are still not gaining much on them. These must be a good class of yellowfins! After 45 minutes we are still hooked up and wondering who has who! Finally at the one hour mark we get color and confirm what we were all beginning to think; BIG EYES!!!!! Boat the first one and then go to work on the other 3. Shortly after boating the first we have one pull off. My old man who is 71 was fighting this one and I think he was more happy to not be hurting than disappointed to have lost the fish. Next fish comes up and we sink the gaff, 2 down and one more to go! This fish is really bull dogging and not coming up. We get a little too impatient after an hour and 45 minutes we unfortunately break him off. We are all dissapointed, exstatic, jelly armed, sweating and just in awe of the strength of these fish. I have caught 400 lb bluefins on stand up gear and they seemed nothing like these fish.
These are the first Big Eyes that we have ever caught and were very happy to have them. We continued to look for yellowfins, but didn't find any. It sounds like a slow day when you only catch 2 tuna, but we could not have been happier. Learned alot about the fish and hope to get another chance to tangle with them again!